Have you heard of the "vacation effect," those positive feelings that return you to a vacation mindset triggered by an image, a smell, or a sound? Steel bands are known to produce the "vacation effect"! The inherently tropical sound of steel pan music—that buoyant, dulcet, mellifluous, silvery liquid, euphonious sound—sweeps listeners away to a lush green isle, where the days are lazy, the foods exotic, and the weather warm.

Next Saturday, Dec. 8, you'll be swept away on a mini vacation when Aircut Music presents the Central Coast Day of Percussion at the Cuesta College Student Center (1 p.m.; all ages; $12 at tickets.cuesta.edu). Organized by Cuesta Steel Band Director Patty Dee, the event will feature her beginning and intermediate bands performing classic steel band numbers as well as Dee's arrangements of pop songs such as Ben E. King's "Spanish Harlem" and The Chiffons' "Sweet Talkin' Guy."

Master percussionist Darrell Voss will do a hands-on percussion demo with audience participation; Cal Poly percussion professor John Astaire and the Cal Poly's Polyrhythmics percussion group will perform; Blair Helsing will demo electronic percussion with his malletKAT, an electronic marimba; and steel pan master performer and educator Jeff Narell will speak about the instrument and offer a demo of lead pan playing. The event should run until about 3:30 p.m., and parking is free.

Steel pan is a unique instrument developed in Trinidad. The quick version of the story is that the slaves of French planters formed a parallel celebration to the French carnival called canboulay, where percussion was played with sticks on metal pots. By 1880, "stick-fighting" and African percussion were banned because of the so-called Canboulay Riots. By 1941, the U.S. Navy arrived, and "pannists," as the players—considered outlaws—were known, started stealing U.S.-owned oil drums, whose lids and sides were pounded and tuned into the modern steel pan.

"I'm kind of self-taught, but I do workshops every summer in West Virginia and Denver," she explained.

Dee teaches steel drum classes at Cuesta College through its Community Programs (sign up at cuesta.edu/communityprograms).

Each pan is a one-of-a-kind instrument, handmade and hand tuned. It looks like a big shiny pan, with various areas within the pan tuned to a particular note. Along the outside of the pan is a "cycle of fifths," with other notes moving into the center of the pan. It's played with small sticks with rubber at the tips. If you're thinking it must sound clangy or sharp and metallic, its sound is closer to the sounds of hand-bells you might hear in church. It's beautiful!

The event will be a great introduction to steel pans and steel bands, and having Jeff Narell headline is a real treat.

He and his brother, Andy, have played since they were kids and appeared on shows such as the I've Got A Secret game show in 1963 and The Ed Sullivan Show in 1967.

"They grew up in New York with a social worker dad who used steel drums with juvenile delinquents to keep them off the streets," Dee said.

You can also hear Dee and her steel band students performing next Thursday, Dec. 6, during the SLO Farmers' Market from 6 to 8:45 p.m. on the corner of Morro and Higuera streets.

There's a big lineup of entertainment this week at Fremont Theater, but for my money, the don't-miss show is Neko Case on Wednesday, Dec. 5 (8 p.m.; 16-and-older; $46.07 at Boo Boo's or fremontslo.com). The indie rock darling has been a quirky, original part of the Americana music scene for nearly a quarter of a century.

Her debut, The Virginian, offered up her own version of the alt-country sound and garnered her a devoted fanbase, but the rest of the world didn't catch on to Case's greatness until her third album, Blacklisted, hit the U.S. Indie charts. Since then, each of her next albums charted in the top five, with two at No. 1: 2009's Middle Cyclone and 2013's The Worse Things Get, the Harder I Fight, the Harder I Fight, the More I Love You. She's currently touring in support of Hell-On (2018).

"I'm writing fairy tales, and I hear my life story in them, but they're not about me," Case said in press materials of the songs on Hell-On. "I still can't figure out how to describe it. But I think that's why we make music or write things. You've got to invent a new language."

Like the Fremont Theater, Morro Bay's The Siren is full of great music this week, thanks to Numbskull and Good Medicine Presents. I'm most excited about Cayucas on Wednesday, Dec. 5 (7:30 p.m.; 21-and-older; $14 at Boo Boo's and ticketfly.com or $16 at the door). These guys epitomize the summer sound. Check out their self-titled song "Cayucas," which features local scenes such as Morro Bay, even though the band is from Santa Monica. 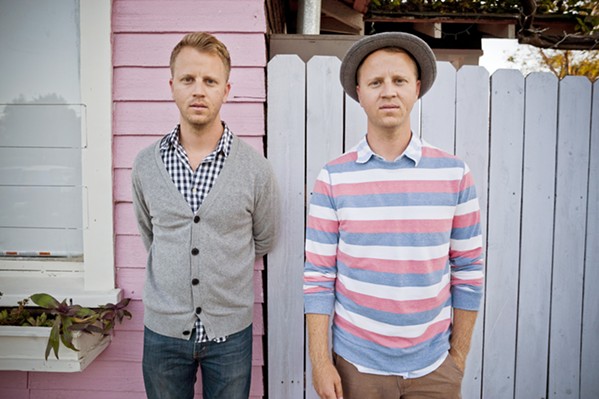 Amazing folk duo Birds of Chicago plays The Siren on Thursday, Nov. 29 (7 p.m.; 21-and-older; $20 presale at Boo Boo's and ticketfly.com or $25 at the door), with special guest Daniel Rodriguez.

In a show booked by The Siren, see Band Of Friends playing on Tuesday, Dec. 4, in a tribute to the music of Rory Gallagher, featuring his original band and fronted by blues guitar wiz Davey Knowels (7 p.m.; 21-and-older; $15 presale at Boo Boo's and ticketfly.com or $18 at the door).

Where for art thou?

"I play electric bourbon folk with a jazz back," the lawyer-turned-performer said. "It's electric and acoustic and is genre-defying although generally singer-songwriter."

The Red Barn Community Music Series presents Phil Salazar and the Kin Folk this Saturday, Dec. 1 (5 p.m. potluck, 6 p.m. show; all ages; $15 at the door). This group of friends has been recording and performing together for 33 years, performing rock, blues, country, jazz, Irish, pop, and bluegrass music.