Two new 'zines battle for the hearts and minds of SLO

When my co-worker, Arts Editor Ashley Schwellenbach, tells me she’s launching a new magazine called San Louie, my immediate thought is how great it’s going to be when she gets fired for competing with New Times. Unfortunately, New Times’ owners aren’t petty jerks, so they refuse to fire Ashley. Unpetty jerks!

Then she tells me she’s having a launch party for her new publication.

“I’m sure you don’t want to go,” she says, standing in my office snottily. (How do you stand “snottily,” you ask? If you knew Ashley, you’d know.)

“Will there be free food and booze?” asks I.

She reluctantly gives me the details, and I immediately call Hugh Jass, publisher of my favorite local ’zine, Lynt, and tell him he should crash the party and show Ashley, whom I often call Assley, what a real ’zine is all about!

He takes the bait, and as I roll up to the Sanitarium, Hugh Jass is holding court on the front porch swing pulling on a 40. He’s already tucked an issue of Lynt (Vol. 1, No. 4) into the Sanitarium mailbox for some unsuspecting bed and breakfast guest to find.

I start going through some of the difference between the two ‘zines: Lynt is small and black and white; San Louie is big and in full color.

Side note: When I asked Ashley for a copy several days ago, she said, “OK, but you have to give it back.” 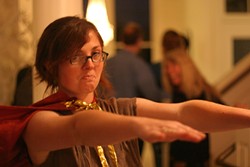 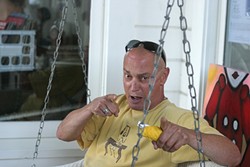 “What the hell? Are you publishing a magazine or running a lending library?”

She tells me she only has two copies and something about Fed-Ex or UPS not being able to find her house. Then the truth comes out. Unless you pick up a copy at her two distributors—Sally Loo’s or Ruby Rose—you have to order the ‘zine online for $10.60 and have it shipped to your house. So here’s another difference between Lynt and San Louie: One costs almost eleven bucks and is hard to get and the other is free and has racks around town (I get my Lynt at McCarthy’s, natch!).

Lynt is full of misspellings and grammar errors; San Louie is slickly designed and totally professional. Lynt is outrageous and funny and stupid; San Louie is respectful and kind and intelligent.

I’m mowing through the hors d’oeuvres table and stealing someone’s Heineken Lights when Ashley comes over and I force her to don the cape she used in the photos of her cover story about local superheroes. I tell her to act like she’s flying while I snap photos, trying to find one that makes her look the silliest.

It’s a good crowd, but I was hoping for a blood feud between San Louie and Lynt, and neither ’zine seems willing to land the first blow. Looks like I’ll have to fight both sides of this battle.

If stranded on a desert island, which subscription would I want?

One to The New Yorker!

In the end, I decide New Times is still safe from serious competition, so I end my evening the way it started—by sparring with a 5-year-old. As I was walking up the stairs to the Sanitarium, I waited at the bottom for a little girl to pass. As soon as she got to the bottom of the stairs, she turned, slapped me on the ass, and said, “Get up there!”

Now she’s back, and her name is Carmen, and she got a trio of plastic hands and she’s beating me about the head and shoulders with them. Finally, the steel cage death match I’ve been waiting for! Bring it on, Carmen! ∆