Even if he doesn’t say it outright, it’s easy to see from the way his blue eyes suddenly light up and crinkle into a smile, or in the excited gestures of his arms whenever he’s talking about it. He lives to pound metal.

That’s not some kind of weird, obscure reference. Max Randolph is a blacksmith. Really. 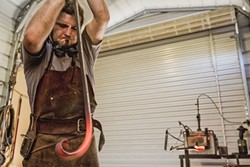 And tucked away in the once verdant hills of Paso Robles, is Legacy Forge. This is where the magic happens.

Randolph’s workspace is actually a small-to-moderate-sized shed right next to his house. Various tools line the walls and a thick braided rope hangs from a bar like a coiled snake. There’s a couple of well-used anvils pushed into a corner next to a small forge that’s roaring like a tempestuous ocean. Over that, you can barely make out the distinct growl of Tom Waits playing through a speaker in the far corner. It’s not exactly what one pictures when they think of a smithy. It’s surprisingly neat, with a cozy, almost home-like feel. Especially once you factor in the russet-colored wiener dog trotting in and out, tail whipping furiously through the air, completely unaffected by the din of activity. That’s the aptly named Copper, fondly referred to by his owner as “a cute little shit.”

It’s here that Randolph’s in his element. He’s a veritable tornado of energy, dashing back and forth between the forge and the anvil, his face the picture of concentration as he leans over his work.

“I don’t need a huge workspace,” Randolph said. “Everything I have in here is mobile, so I can move things around and rearrange everything depending on what I’m building. I make do.”

The onset of the Iron Age—around 1200 B.C., according to the Encyclopedia Britannica—made the blacksmithing trade an integral part of civilization. Heating steel or iron to blistering degrees made it malleable, like a poker-hot Gumby, and with some careful and methodical hammering, people could create an assortment of tools and weaponry. The importance of the trade stretched on and on until the late 19th century, when the machine-made ousted the handmade. 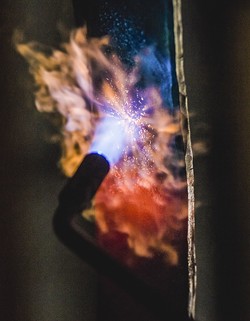 Randolph’s great-grandfather, Angelo Novo, had a forge in Santa Maria at the turn of the last century, but was unable to keep up with the speed of machinery—as is unfortunately the case for the majority of blacksmiths. But Randolph thinks the demise of the utilitarian blacksmith wasn’t so much a curse, as a blessing.

“My great-grandfather was the last of them because the industry enforcement killed them off, and rightfully so,” Randolph said. “Because we don’t need to be making shovels anymore; we have machines to do it. Now that we have an opportunity to not work on farm equipment, we can actually put our attention to the fine arts.”

And that’s really what Randolph is, an artist. How else would you describe a person who can take a lump of steel and turn it into something downright beautiful? The sweeping curves of the hard metal, coupled with the delicate twists and spirals present in all his designs, give the appearance of something alive and fluid. That spark, that vivacity Randolph imbues into his work makes you just want to reach and run your hands over the serpentine squiggles, just to make sure it’s actually made out of metal and not something softer, something more pliable.

But it took him a while to find his unique style. His journey toward metallurgy started when he was 14 years old and yearning for some kind of creative outlet.

“There was never like a cognizant choice that was like, ‘I like metal, I’m going to do that,’” Randolph said. “I started out in construction, didn’t really find myself there. I knew I had to build, because like with the whole ADHD thing, I just had to get stuff out, I was always drawing, I was always creative. So I pretty much started to figure out, ‘OK, what can I build?’” 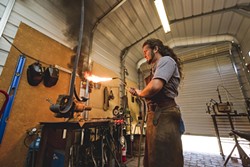 Coming from a family with a zeal for barbecuing, Randolph started building and welding barbecue pits for them. Through a series of trial and error, he experimented more with steel, and it’s there that he said he found himself. It was only then that he learned about his family history.

With the help of his father, they tracked down the very anvil that belonged to Novo. Randolph threw himself into learning how to manipulate steel and iron with all the determination and tenacity of a stick of dynamite. Nothing could stop him.

“I just kept pushing and pushing,” Randolph said. “And having like an insatiable drive for challenge and expression, it pretty much did it itself. I was kind of along for the ride, it seemed. In hindsight, I can hardly really remember any of it. It was just this long blur of getting better and better.” 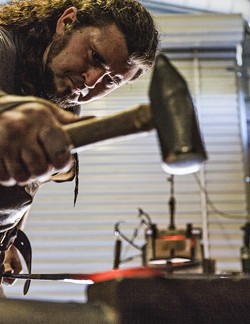 What makes Randolph truly special is his inexhaustible creativity. In his house, the walls of his office are plastered with thousands of drawings of all the projects he’s done in the past, and projects he’s planning to do in the future. Randolph said he gets inspiration from the art nouveau style, and you can see that in his drawings: Every contour and curl of whatever whirligig he’s dreaming up next is painstakingly detailed in clean, stark lines.

Even with his powerful imagination, Randolph said his biggest struggle starting out was trying to convey his vision to clients. In fact, Randolph said he still sometimes has difficulty making someone understand where he’s going or see the picture that shows up so clearly in his mind.

“It’s so hard,” Randolph said. “Because you’re just trying to drag these people along, and you’re like, ‘No, no, no. Just trust me, this is gonna be amazing.’”

But once in a while, a kindred spirit comes along who can really appreciate the frenetic excitement that overtakes Randolph when he’s planning out a future commission. 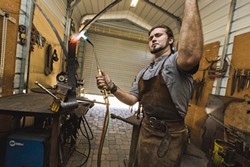 And Heather Herrmann is that kindred spirit. A retiree living in Atascadero, she and her wife, Cathy Howell, asked Randolph if he could build them a few tables for their backyard. Instead, the tables ended up being put on the backburner, and he designed a couple light standards, posts and a railing leading up to the garden, which Herrmann said has since become the centerpiece of their home.

It doesn’t take much prodding to get Herrmann to talk about Randolph either. She was practically singing his praises over the phone with the hint of a smile clearly audible in her voice.

“He’s just one of those guys where you’re instantly drawn to him,” Herrmann said. “He has so much energy; he’s so positive; and he’s got so much imagination. When you’re talking to him about a concept, you can just see the wheels turning in his head. He takes these ideas in his teeth and just runs with it. If I could keep finding things for him to do around our house, I would be really happy.”

While blacksmiths very nearly went extinct after the introduction of machines, Randolph maintains that the industry's bounced back.

“You might think of it as a rare trade,” Randolph said. “But it actually isn’t. We’re out there. There’s a good amount of us.” 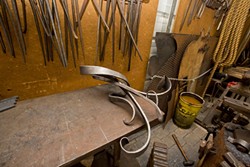 And surprisingly enough, this is true. According to William Stuart from the California Blacksmith Association, there are more than 600 full-time blacksmiths in California. Stuart doesn’t think that blacksmithing is in any danger of extinction either: He’s noticed a large trend of younger people who are genuinely interested in learning the tools of the trade. However, Stuart noted that actually becoming an established blacksmith is a different story.

“To start a business or a full-time trade takes a lot of money for tools,” Stuart said. “Or just even time to build them. Or both. And when they figure out what the wage is for time spent, well, let’s just say there are better paying jobs.”

Randolph, however, was undeterred. The week after he graduated high school, he managed to apprentice himself to an older blacksmith in Atascadero named Jerry Wheeler in order to learn the ABC’s of metalwork. Randolph said he was appreciative of the experience with Wheeler, but he constantly found himself at odds with the older man’s more straightforward approach.

“He wasn’t a bad blacksmith, he just didn’t have the eye, and that was frustrating,” Randolph said. “I kind of promote learning the basics and setting off on your own. Because then you start learning your way to do things, making your brain work with you. You get connected with your heart. When you learn from a master for 20 years, you’re literally making what you think they would make.”

Randolph wanted to make whatever he wanted to for whomever he wanted. And that independent streak led him to start Legacy Forge in 2006, when he was only 18 years old.

But despite all of this success, despite the fact that Randolph is now busier than ever, so much so that he’s booked solid until July of next year, he maintains that he’s by no means an expert.

“I’m not gonna be done learning until I’m six feet under,” Randolph said. “This is a lifelong journey that I’m more than excited about. I’m at the trailhead right now, and it’s gonna be very cool.”