An aggressive strain of bees has infiltrated SLO County 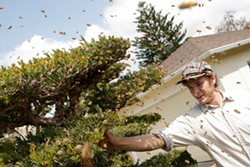 Beware of that beehive tucked in the eaves.  Africanized bees—the strain commonly referred to as “killer bees”—have finally infiltrated SLO County, and their behavior is indeed potentially dangerous.

The aggressive strain has relentlessly spread north since 1956, when it was first noticed in Brazil, arriving in Texas during the ‘90s, then Arizona, and now in California. Santa Barbara is battling them, but moving at about 30 miles a year, they have not yet been reported in Paso Robles. Scott Jeffreys, a lecturer in the Horticulture and Crop Sciences Department at Cal Poly who teaches bee keeping, emphasized, “They arrive and infiltrate an area by hogging the gene pool.  A year or two after setting up shop, hell breaks loose.”

Emergency calls to 911 for help with bees are transferred to Isaac Miller, who has seen increased aggression by swarms this year: “People call with monstrous tales, paralyzed with fear, saying they can’t leave their homes. If you are afraid of bees, it is like Armageddon.”

In response, Miller removes hives by putting beeswax and frames in a box, to which a swarm is attracted by smell. He collects the boxes at night when the bees inside are inactive and takes them to his yard.

“We put the hives we capture in a containment yard away from the other bees until we can tell [whether they are safe],” Miller explained, “To be careful we assume they are nasty and exile them.”

Africanized bees cannot be positively identified without laboratory analyses, though they tend to be smaller than native honeybees. It’s behavior that distinguishes the strain among laymen. A calm swarm can instantly turn dangerous in defense of the hive.

European honeybees common to the area routinely swarm during the spring to protect their queen while scouts look for a new home. A swarm is a good sign:  It means the hive survived the winter and is able to divide, forming a new colony.  Swarming only when the temperature is 70 degrees or above, the queen mates with drones in warm weather.

Unlike the European honeybee, which swarms one or twice each spring, the African bee swarms throughout the year. A swarm seen after May is therefore presumed to be African.  Constantly on the move, they are easily agitated. A loud sound, such as a farmer driving a tractor 100 yards away, can prompt an entire swarm to attack. Though the venom of Africanized bees is no more potent than that of their benign cousins, dogs and even livestock can be killed by the sheer number of their stings.

Africanized bees take over rapidly because of strong resistance to disease. Moreover, the European honeybees are more susceptible to such parasites as the Varroa mite.

Africanized bees are not able pollinators because they swarm frequently and their instability does not allow them to produce much honey. Beekeepers in South America where the Africanized strain has displaced other bees have resorted to selling mostly wax products, as a result.

Jeffreys emphasized that with “the front end of African bees attacking, we have to maintain a strong European bee presence.” Both Miller and Jeffreys raise their own queens and re-queen the aggressive hives. “After squishing the violent queen, we put a docile, European queen in a cage and place her within the hive,” Jeffreys explained.  “That way the hive can’t kill her.  About three days later, once her pheromone has become accepted, the cork is popped out of the cage and she crawls out to rule the hive.”

Though the aggressive bees are not finding it easy to move in because of the strong population of healthy European bees, Jeffreys admitted, “It is probably inevitable that the African bee will come to dominate the gene pool in the area.”

Send comments to intern Alycia Kiley via the editor at econnolly@newtimesslo.com.