It’s “dismal,” “industrial,” and “depressing,” he said, plagued by tattered walls and doors, a leaky roof, and poor ventilation.

The size and design of the facility can’t provide cats the space and environment they need, or allow dogs to be healthily segregated based on their size, health, and behavior. 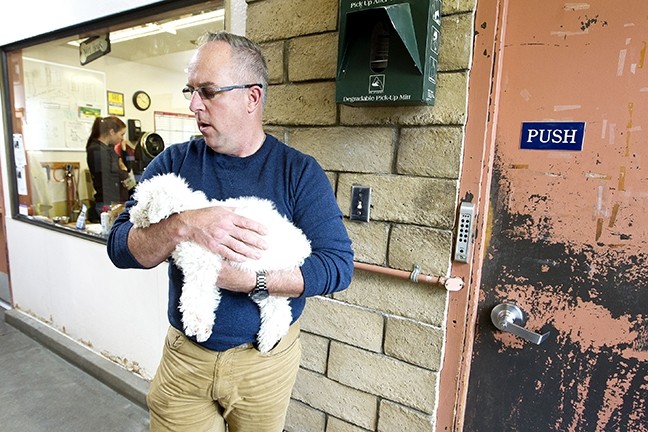 “It’s single-cage housing for cats,” Anderson said. “[Dog] kennels are in opposing rows. One looks right into the other.”

While the county shelter is likely one of the last places you’d want to see your pet spend the night in, it’s the only open intake facility in the county and sees 4,500 stray animals come through every year.

But the days of that dreary shelter are numbered.

On Feb. 28, the SLO County Board of Supervisors approved the first allocation of funding for the construction of a new animal shelter, which will be built close to where the current one is. The county entered into a $1.2 million contract with construction firm Kitchell and finalized an agreement with the seven cities in the county to share the $14.8 million in total estimated costs.

According to the county, the new shelter will be 15,000 square-feet—about 5,000 square-feet more than the current one—with the capacity to house 65 dogs and 100 cats. The facility will include separate housing for animals in quarantine and for feral and exotic animals. More outdoor areas will allow for dog walking, outdoor training, shelter storage, and a wash area.

After a few years of analysis and going back and forth, the county decided to build a new shelter as opposed to renovating the old one. It determined that starting from scratch was the most cost-effective path.

The current animal shelter was built in 1975 atop a landfill used by the Army and Camp San Luis Obispo in the ’40s. Not only is the building itself deteriorating, but the land underneath it has soil stability problems.

“You’d have hoped to get more than 40 to 50 years out of the facility,” said County Administrative Officer Dan Buckshi. “But it became apparent there were many more structural issues in play.”

The nearly $15 million price tag for the new shelter is a tough pill to swallow for some community members. The Atascadero City Council had a lengthy discussion on Feb. 14 about whether to agree to the shared-cost proposal put forth by the county. The council ultimately approved the agreement.

Anderson said the shelter’s estimated cost is the standard for a modern day animal facility. Expenses for all animal shelters include sophisticated ventilation systems, extensive plumbing, drainage and water supply, as well as more durable surfacing than the average building. Other costs for SLO County are connecting roads and utility lines to the shelter, which will be built on an undeveloped plot of land.

Jill Tucker, executive director for Woods, told New Times the nonprofit is getting permission from Atascadero to open a modular building that will serve as a spay/neuter clinic.

“A spay/neuter clinic has been a big missing piece for the North County community,” Tucker said.

Tucker said she’s hopeful the clinic will be up and running in a few months at 2300 Ramona Road in Atascadero. She pointed out that if Atascadero can lower its use of the county shelter, its financial obligation to the county would change.

Anderson thinks construction on the new county shelter will be complete by 2020. In the meantime, he said, the old shelter still works. It meets minimum regulatory standards, but Anderson knows the minimum standard isn’t good enough for the SLO community.

“We’re really looking forward to be able to provide a higher level of care,” he said.