Pardon my fandom, but I always get a kick out of knowing famous musicians have settled down on the Central Coast—from Jon Anderson of Yes, to Keith Roberts of the Young Dubliners, to Ed Cassidy of Spirit, to Merrell Fankhauser of The Impacts, Fapardokly, HMS Bounty, and Mu.

Another famous SLO County resident is Kenny Lee Lewis, longtime guitarist and bassist for the Steve Miller Band, which plays next Thursday, Aug. 22, at Vina Robles Amphitheatre (7 p.m.; all ages; $59 to $125 at vinaroblesamphitheatre.com), with Americana act Marty Stuart and His Fabulous Superlatives opening. 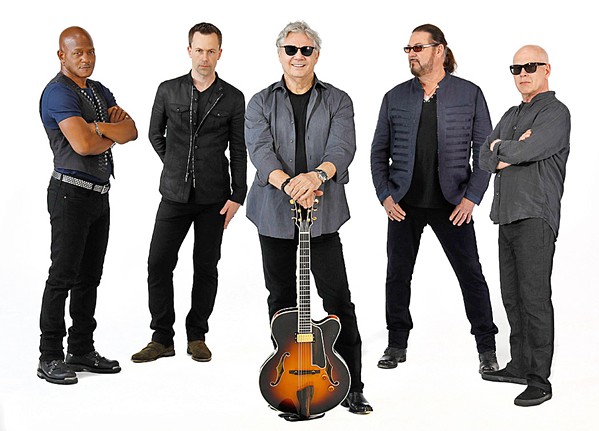 Steve Miller can trace his beginnings back to 1966 San Francisco, where he formed the Steve Miller Blues Band, which after being signed to Capital Records the following year was shortened to the Steve Miller Band. After their first couple of records, the band drifted away from their blues and psychedelic rock beginnings—songs like "Gangster of Love" and "Space Cowboy"—to the sort of classic rock they're known for with hits such as "The Joker," "Fly Like an Eagle," and "Take the Money and Run."

Kenny Lee Lewis joined the band when they were on a pretty hot run of gold and platinum records, but at a time when Miller was running out of steam creatively.

"I met him in the winter of '81," Lewis explained on a call from Denver during a tour stop. "He was trying to put together a record, and he was kind of dry. He didn't have any material. I was at the time trying to put a band together with the drummer who had played on most of his hits, a guy by the name of Gary Mallaber. He and I had been in a recording band for a couple years and had made a couple records with another guy, and we became songwriting partners.

"We hooked up with another bandmate named John Massaro, and we started writing songs, and we had about eight songs mixed and ready to start shopping, and right around that time, Steve [Miller] called Gary and asked him if he had any material because he knew Gary wrote," he said. "Gary told him we had this project going, and he came in after the call and asked me and John if we wanted to submit the demos for consideration for Steve to maybe pick a song or two, but he ended up taking everything."

Those songs turned into 1982's Abracadabra, which had platinum sales in the U.S. and Canada, charted in nine countries (including reaching No. 1 in Germany), and generated the singles "Keeps Me Wondering Why" and "Cool Magic," written by Lewis and Mallaber, as well as "Give It Up" and "Abracadabra," written by Miller.

Lewis left the band from '87 until 1993 while Miller tried a largely unsuccessful foray into jazz, but he reunited with the band as their Greatest Hits album began to find new audiences.

"His Greatest Hits came out on this new format that was called 'compact discs' in those days," Lewis said with great exaggeration, "which of course were CDs, and it was selling like hot cakes to younger people—college kids and fraternity parties were having Steve Miller nights. All of a sudden, there was a new generation of listeners to his stuff."

Lewis jokes that the way he describes their shows is "we're kind of like a tribute act but we have a lead singer whose name is Steve Miller who sings the songs. We pretty much just honor the catalog because that's what people want. In the middle of the show we do some blues, and now we have Marty [Stuart and his band] sitting in with us, so we kind of do an Americana jam with some of Steve's songs that cross over to country, but the beginning of the show is hits and the end of the show is hits."

There you have it, folks. If you want to hear a whole mess of Steve Miller Band hits, listen to some of their blues and maybe a few more obscure Americana tracks, and witness them jam with opening act Marty Stuart and His Fabulous Superlatives, get your tickets now for what's being billed as "An Amazing Evening of Original American Music—Classic Rock Meets Classic Country."

First of all, don't forget reggae heroes The Original Wailers play the Fremont Theater this Thursday, Aug. 15 (doors at 7 p.m.; all ages; $24.96 at Boo Boo's and fremontslo.com). The band features former Bob Marley guitarist Al Anderson, who toured with Marley from 1975 through 1980.

I was a Cal Poly Radio DJ on KCPR 91.3 FM when the jangle-pop act Gin Blossoms started lighting up Arizona, but we didn't really hear about them on the West Coast until the 1992 release of New Miserable Experience, their major label debut that generated the radio hit "Hey Jealousy." The band's 1996 follow-up, Congratulations I'm Sorry, sold like mad, and its single "As Long As It Matters" garnered a Grammy Award nomination. Then the band broke up.

Four years later, they reconvened and have recorded three more albums, none of which generated the acclaim of their early successes, but they still put on a great show and have a lot of cool songs! See them when they play their New Miserable Experience Live show with opener Absolute Zero on Saturday, Aug. 17 (doors at 7 p.m.; all ages; $40.80 at Boo Boo's and fremontslo.com).

No Bridges for you!

If you didn't get tickets to Numbskull and Good Medicine Presents' two Jeff Bridges shows this Friday, Aug. 16, at Presqu'ile Winery, and Saturday, Aug. 17, at Treana, you're too late. They're both sold out.

However, two-tone ska act The English Beat plays Presqu'ile Winery on Saturday, Aug. 17 (doors at 6 p.m.; all ages; $25 at Boo Boo's and ticketfly.com). They have so many great songs: "Tears of a Clown," "Ranking Full Stop," "Mirror in the Bathroom," "I Confess," "Save It for Later," and tons more!

Numbskull and Good Medicine are also bringing Dave Alvin and Jimmie Dale Gilmore with The Guilty Ones back to The Siren next Thursday, Aug. 22 (7 p.m.; 21-and-older; $22 presale at Boo Boo's and ticketfly.com). These two are great together! Amazing guitarist Taylor Scott and his band will open the show with some funk, soul, rock, and R&B.

Passafire plays the SLO Brew Rock Event Center on Friday, Aug. 16 (8 p.m.; 18-and-older; $15 at slobrew.com). The Georgia-based act is much more than a reggae act, mixing hard rock, hip-hop, and more into their sound. Kash'd Out will open the show.

Bob Marley progeny Julian Marley and The Uprising plays the SLO Brew Rock Event Center on Wednesday, Aug. 21 (8 p.m.; 18-and-older; $26 at slobrew.com). Like his father, Julian creates socially conscious reggae, but unlike his brothers Ziggy and Stephen, Julian was born in the U.K. and raised by his mother, Lucy Pounder, though he made frequent trips to Jamaica and was part of Ghetto Youth International with his brothers. Rastan opens.

After a bit of a hiatus, local jam band Up in the Air is back in action with a show this Friday, Aug. 16, at Atascadero's Bristol's Cider House (7 to 9:30 p.m.). Get your feel-good music on! 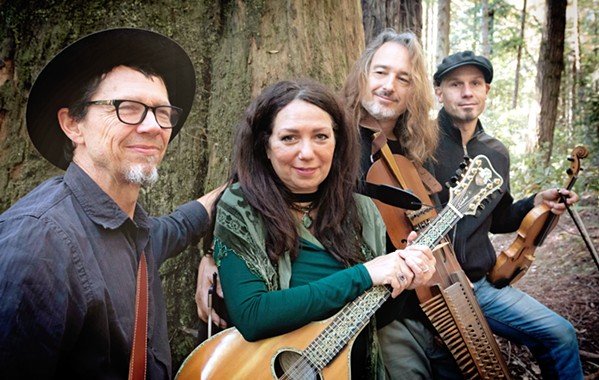 Just a reminder for all local musicians, bands, and singer-songwriters that the deadline to submit to the 11th annual New Times Music Awards is this Monday, Aug. 19, at 5 p.m. Enter online at newtimesslo.com or see the entry form on page 15 in this issue. Music lovers, mark your calendars for the big event on Friday, Nov. 8, at SLO Brew Rock Event Center. Δ