Steynberg Gallery reopens as The 4 Cats Café and Gallery

Stop by during Art After Dark on Sept. 7 from 6 to 9 p.m. for the opening reception of the Tracy Taylor and Friends (Persons of Interest) show at The 4 Cats Café and Gallery. Visit the4cats.com for more information and future happenings.

What's old is new again. After more than a decade of business and a brief closure, the art and coffeehouse formerly known as Steynberg Gallery reopened in January as The 4 Cats Café and Gallery—with new owners.

The previous owners, Peter and Estelle Steynberg, recently retired and put the space up for sale.

"The past 13 years, it's been a café-gallery, and it's been lot for Peter," longtime manager Kalae Neves said. "The new owners realized it was a hub for people in the community, and they wanted to enhance what it already is."

The new owners, Art and Lana Tabuenca, renamed the shop for a coffee-art space they used to frequent in Spain called Cuatro Gatos, which once attracted great artists like Pablo Picasso. Aside from a new name, 4 Cats will also be extending its hours in the near future. New beans from Intelligentista Coffee and Tea in Chicago are already being brewed and served up by friendly, familiar baristas. Neves also hopes to bring more of a lounge feel to the space, with beer and wine offerings from local spots like Central Coast Brewing and Tolosa Winery. Soon, cider could be on tap, too. Communal happenings like art shows, foreign language clubs, and gatherings for women in technology will remain in rotation on the café's calendar. The space has also been revamped to feel noticeably brighter and airier.

"We want to make it more San Luis, more comfy," Neves said. "We're trying to just keep the success going. It's hard. A lot of people had a special relationship with Peter."

To kick off the fall, a typically busy time for the café with the influx of students and staff from both Cal Poly and SLO High School, local artist Tracy Taylor will team up with seven of her artist friends, including locals like Jeff Claassen and Neal Breton, to put on the Tracy Taylor and Friends (Persons of Interest) show, with an opening reception on Sept. 7. Taylor will display her You Can't Escape Beauty series, which includes quirky and whimsical watercolor pieces inspired by the views seen from standing atop various fire escapes. 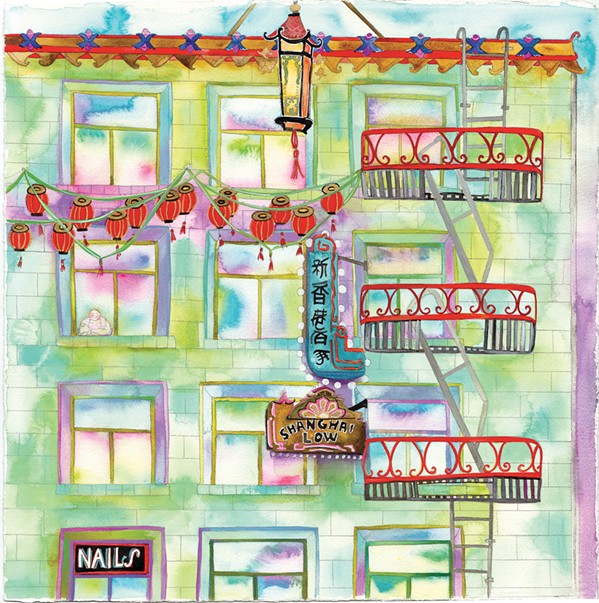 "It's going to be so eclectic and fun and diverse," Taylor said of the show. "I think of fire escapes as beautiful. You can just hang out and have some privacy."

Neves said she hopes that customers both old and new can give 4 Cats a chance to be their go-to neighborhood coffee shop.

"It still has the same homey feel," Neves said. "It's the same girls behind the counter. And the new owners have a lot to offer the community." Δ