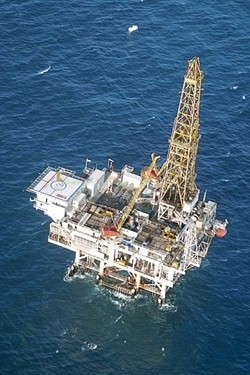 It may have seemed that a proposal by Plains Exploration Company (PXP) to renew an offshore drilling lease along the Central Coast was all but dead. Not so, it turns out, as a revitalized PR effort by PXP and a new push by San Luis Obispo Assemblyman Sam Blakeslee could still finagle a way to allow more offshore drilling. That’s their hope, anyway.

“I’m not sure what the governor and Blakeslee are up to,” said Lt. Governor John Garamendi, one of the chief critics of the PXP project.

In 2008, PXP proposed to slant drill from Platform Irene into the Tranquillon Ridge Oil and Gas Range in state waters three miles off the coast near Lompoc. The agreement that would have allowed PXP to drill would also have required the company to shut down its four platforms off the coast of Santa Barbara County by 2022.

Local environmental groups backed the agreement as a positive one in the long run, but the California State Lands Commission rejected the lease. Despite that hiccup, an assembly bill authored by Blakeslee and backed by Gov. Arnold Schwarzenegger attempted to create a new body that could have overridden the commission’s decision and allowed the lease to go through anyway. That bill failed to pass through the Legislature.

At that point, the project appeared dead in the water. As if to brush off the outright rejection, however, PXP is making a new public push for the project. The company has recently proclaimed that 66 percent of California voters want the project despite the Lands Commission decision, according to a survey the company released.

“There’s a lot of folks that just simply believe it makes absolutely no sense to pass over a project like this,” said John Martini, PXP manager of government affairs.

The project is being rejuvenated on the legislative front, too. Blakeslee submitted another bill that would create a way around rejections from the Lands Commission. A Blakeslee spokesperson couldn’t be reached for comment as of press time.

Garamendi called the efforts by Blakeslee, Schwarzenegger, and PXP an end run around the State Lands Commission. He told New Times the concessions from PXP—shutting down existing platforms and committing $100 million in revenue up front, for example—may not be enforceable, and allowing the company to drill would effectively unlock the California coast to more offshore drilling.

“Obviously PXP and the governor have not given up on opening the California coast to oil drilling,” he said.

He further claimed that 80 environmental groups oppose the PXP project, despite the company’s survey results.

PXP’s Martini, on the other hand, said the Lands Commission rejected the project based on false, hypothetical concerns, but voters weren’t fooled: “It’s just one of those unique win-win opportunities that resonates with people across all political spectrums.”