It must have been a heady time—mid-‘70s Austin—and at the tender age of 23, you get recruited by Jimmie Vaughan (Stevie Ray’s older brother) to join a rootsy blues act called The Fabulous Thunderbirds, where you quickly become frontman and chief songwriter. That’s what happened to Kim Wilson, who’ll be leading his band Kim Wilson’s Blues All-Stars through its paces this Saturday, March 20 at the SLO Vets Hall (8 p.m.; 21-and-older; $20 at the door). The Cinders will open the show.

The Fabulous Thunderbirds peaked in the ‘80s, and in 1990 Jimmie left to record with his brother, effectively ending the group, but Wilson, a guy Muddy Waters called “The greatest harp player since Little Walter,” was too big a talent to disappear, so he quickly formed his own group, which now includes Barrelhouse Chuck on piano, Larry Taylor on bass, Richard Innes on drums, and guitarist Billy Flynn.

Wilson’s most recent accomplishment includes a Grammy nomination for the work he did on the film Cadillac Records, but he’s been the recipient of plenty of awards: The Blues Foundation named him “Contemporary Blues Male Artist of the Year” in 2006, and “Lookin’ for Trouble!” was named Blues Song of the Year in 2004. Wilson has also contributed to the work of many other great artists such as the legendary Muddy Waters (who called him his “son”), contemporary artist Bonnie Raitt, guitar legends Stevie Ray Vaughn and brother Jimmy Vaughn, and Martin Scorsese’s movie The Blues.

Feel the heat this Saturday when the SLO Blues Society hosts this living legend. 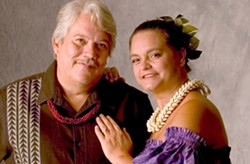 I can’t afford a flight to Hawaii, but the next best thing will cost you less than $40.

Keola is a slack key guitar master, and his wife Moana is a masterful hula dancer, “renowned for her mastery of authentic lilting melodies, colorful words, and expressive dance movements.”

“My family is serious about music,” said Keola in press materials. “We come from a history of oral tradition in which music and storytelling is a central component. We’re now beginning to realize the wealth of that knowledge and how so much of it has been lost. We’re finally regaining some of these meanings and incorporating them in our own lives.”

The evening will meld mele (song), hula (dance), and oli (chant) with native percussion instruments and Hawaiian folklore. Twenty-three-year-old Raiatea Helm made history in 2006 as Hawaii’s first solo female vocalist to receive a Grammy nomination for her sophomore CD, Sweet and Lovely.

It used to be we’d see The Young Dubliners once a year, at most, but since frontman Keith Roberts now lives in Paso Robles, they seem to show up more frequently, which is good news for us. Few bands put on a better live show.

The Young Dubliners return to Downtown Brew this Saturday, March 20 (7 p.m.; all ages; $15 presale), another stop on their seemingly endless tour to promote their newest recording, the terrific Saints and Sinners.

The Young Dubliners’ show doesn’t need much promotion, because their local fan base is large and loyal, but if you’ve never witnessed these guys live, don’t squander this opportunity.

By the way, Faultline Music will be raffling off a guitar autographed by The Young Dubs at the show. Tickets are $1 (sold at the show; must be present to win), with proceeds going to The Relay for Life. Local favorites Criticnue will open the show.

Downtown Brew has some reggae lined up for you on Friday, March 19 when Tomorrows Bad Seeds returns to the club with support act Bare Feet (7:30 p.m.; all ages; $10 presale or $12 at the door). Expect a punchy rhythm section, exhilarating guitar riffs, and harmony vocals from the Bad Seeds.

Mark your calendar for next Thursday, March 25, when Fall of Troy brings its experimental prog punk to the Brew (7 p.m.; all ages; $12).

Still in a St. Patrick’s Day mood? Then check out Four Shillings Short this Friday, March 19 (7 p.m.; $5 donation; kids under 16 get in free) at Cambria’s Vineyard Church (1617 Main St.). The Celtic/folk/world music duo performs on a bevy of unusual instruments and in myriad styles. This is a great show for kids, who’ll be amazed by the duo’s thematic range.

The San Luis Obispo County Jazz Federation and The San Luis Obispo Museum of Art are teaming up to present the Joe Bagg Organ Trio for the third concert in the Marilyn Greenberg Concert Series this Friday, March 19 at 8 p.m. in the Museum of Art. According to press materials, “The organ is a classic instrument in the world of jazz, although not often heard in live performances. Joe Bagg is one of the finest purveyors of organ jazz having performed at the Playboy Jazz Festival, the Dubai Jazz Festival, and many other major venues.” Buy presale tickets ($22) at Boo Boo Records or the venue. The first two concerts were both sell-outs, so don’t tarry.

Check out jazz vocalist Margie Nelson when she appears with the Quiet Knights on Friday, March 19, at The Gardens of Avila from 6 to 8:30 p.m.; and Saturday, March 20 at The Porch Café from 7:30 to 9:30 p.m. Margie is passionate for the music of a bygone era, and she’ll “lull you into a romantic mood with soft, silky, smooth, sweet, and smoky ballads, or get your hands clapping and toes tapping as she cuts loose and swings like the best of them.”

Shepards Pie (aka—Shameless unplugged) hits the Fuel Dock this Saturday, March 20 from 3 to 6 p.m. The Fuel Dock has created a community of musicians and friends who are glad to know there’s a place to come and dance and enjoy a few hours on a Saturday afternoon.

Latin jazz and salsa act De La Bahia plays the Otter Rock Cafe on Saturday, March 20 from 8 to 11 p.m. Bring your dancing shoes and be ready to get those hips moving.

Celebrate the arrival of spring this Saturday, March 20, 8 p.m, when Brent Dannells brings his 88-key electronic piano, Bertha, to the stage at Linnaea’s Café. There is no cover, but donations towards a recording fund will be gratefully accepted. According to Dannells, “The music will be 90 percent original with a few traditional blues tunes and at least a couple of songs with an Irish flavor.”

Seattle’s Goldie Wilson takes a sound from the past and turns it into something fresh: “a lush ‘60s pop sound with a modern twist, an indie-cocktail of infectious, danceable pop that sounds like it could have dominated in the sound’s golden era, while still sounding fresh
and vibrant decades later.” The band’s newest recording—four-part vocal harmonies, a Motown groove, and garage-rock sensibilities—was produced by Jim Diamond (White Stripes, Romantics, Dirtbombs) and recorded in the heart of Motown. Check out Goldie Wilson on Sunday, March 21 at 2 p.m. at Mr. Rick’s.

Celebrate the spring equinox this Sunday, March 21 (3 to 5 p.m. at the Cuesta College Library) when the Central Coast Jung Society along with Cuesta College Friends of the Library host an afternoon of activities that will include a music and dance performance by Chris O’Connell and Jude Warnisher. Hor d’oeuvres will be served. Call 546-3132 to RSVP. 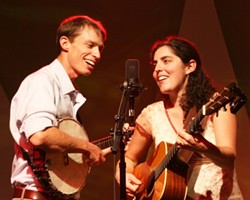 Matt’s Music, Stage & School presents a special concert with folk and bluegrass artists Anne & Pete Sibley this Sunday, March 21 at 5 p.m. “This is a show that you will not want to miss!” said Matt. “Since listening to their newest CD, Coming Home, I haven’t cried or smiled this much in many, many years. These up and coming artists are amazing!” Tickets ($15) are limited, so call 237-0054 and reserve yours today. 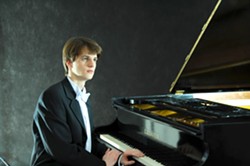 Russia may have had a dismal showing at the Olympics this year, but the country is still well known for turning out excellent musicians, some of whom who will be on display this Sunday, March 21 when The Moscow State Radio Symphony Orchestra plays at 7 p.m. in the Performing Arts Center’s Cohan Center, with special guests, conductor Robert Cole, pianist Alexander Sinchuk, and cellist Julian Schwartz. Rachmaninoff’s "Rhapsody on a Theme of Paganini, Op. 43," Rimsky-Korsakov’s "Scheherazade Symphonic Suite for Orchestra, Op. 35," and Tchaikovsky’s "Romeo & Juliet Overture—Fantasy and Variations on a Rococo Theme in A for Cello and Orchestra" are on the bill. Student and adult tickets range from $36 to $58; call 756-2787. A free pre-show lecture for ticket-holders will be presented by Cal Poly Music Dept. professor Alyson McLamore at 6 p.m. in the Performing Arts Center’s Philips Recital Hall.

The Yew Tree, in association with Painted Sky Studio, is bringing Cosy Sheridan and TR Ritchie to Painted Sky this Sunday, March 21 at 7 p.m. (Tickets are $18 at The Yew Tree, 927-0500; and The Cambria Business Center, 927-8880). Hailed as “One of the era’s finest and most thoughtful singer/songwriters,” Cosy got her start in 1992 when she won the Telluride Bluegrass Troubadour Contest and the Kerrville Folk Festival’s NewFolk Songwriting Contest. Since then, she’s played everywhere from Carnegie Hall to the Philadelphia Folk Festival, and her songs have appeared on the Jerry Lewis Telethon, The Dr. Demento Show, in best-selling author Robert Fulghum’s new book Third Wish, on NPR’s Car Talk, and in the documentary Wrenched.

Local rock, roots, and blues band Maheyla and The Ritual play the Frog and Peach this Sunday, March 21, at 10 p.m. “We’re just about to release an original CD, so this will be a great gig to hear some of that,” said Maheyla. “The outstanding musicians that make up this seasoned and established band have played professionally in the area for over 25 years. Our extensive song list consists of outstanding original songs and some cover tunes suited to our own style that go over very well with any crowd and our regular fan base.”

This Tuesday, March 23, Chicago-based duo Small Potatoes comes to the Steynberg Gallery for a 6:30 p.m. show ($5; call 547-0278). Featuring Jacquie Manning and Rich Prezioso, the folksy duo plays a repertoire they describe as “Celtic to Cowboy.” Both terrific musicians, this is a duo that Dirty Linen Magazine called, “one of the most polished, inventive, and entertaining shows on the circuit.” Women on the Move, the SoCal trio of Joan Enguita, Trish Lester, and Linda Geleris, will also be there, along with Laura Meyer from NYC, Randall Lamb, J. D. Hardy, and John Sandoval.

Oregon-based The Monk Band—with vocalists Marko, Dubbs, and Neil Mangicaro—will bring its “Spring PropaDUBtion Tour” to Frog and Peach this Wednesday, March 24 at 9 p.m. This is positive, socially conscious reggae: “Pick your brother up when you see a brother fall” sings Neil Mangicaro; “You better change the world, cuz it won’t change for you” sings Dubbs; “Five minutes to show time and I, try come correct every time” sings Marko.

Glen Starkey is older but not wiser. Commiserate at gstarkey@newtimesslo.com.