The Grammy winner’s first major hit was “My Bologna” in 1979 (his parody of The Knack’s “My Sharona”), which he recorded in the men’s bathroom of the Graphic Communications building and sent off to the Dr. Demento Show. Since then, he’s poked fun at everyone from Michael Jackson to Nirvana to Eminem, and he shows no signs of stopping.

To put it bluntly, nobody does pop-satire as well as Yankovic, who happens to be the biggest-selling comedy recording artist of all time. Now after nearly five years without a new album, he’s delivered Alpocalypse, where he does an awesome send up of Lady Gaga’s “Born This Way,” which he spoofs as “Perform This Way.”

The next San Luis Obispo Blues Society show is going to be a doozy, but it’s one of those good news/bad news things. The good news is Sista Monica Parker tops the bill, and the bad news is tireless SLO Blues Society maven Sara Kocher recently passed away. 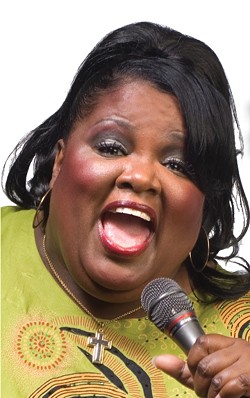 Sara loved the blues and live music and worked hard to promote this great organization and its commitment to bringing quality blues to the area. She’ll be sorely missed. I can’t think of a more fitting performer than the soulful Sista Monica to send Sara off in style.

Sista Monica, an award-winning blues, soul, and gospel performer, has been called “the lioness of the blues.” Born and raised in Gary, Indiana, by the age of 7 she was “singing in the Great Band Missionary Baptist church gospel choir,” according to her bio. “She absorbed the soul and rhythm and blues music of Detroit and Chicago with influences such as the Rev. Al Green, Aretha Franklin, Mavis Staples, James Brown, and Sam Cooke. After some college and a stint in the Marine Corps, she owned and operated an IT executive search firm in Chicago and then Silicon Valley. In the early 1990s, she made the transition from working in the IT industry to being a blues singer. Almost immediately, she was performing at the Monterey Blues Festival.” Her most recent record—her ninth since 1995—is Living in the Danger Zone.

Don’t miss this terrific performer, and don’t miss your chance to say a little prayer for Sara.

There’re three great shows at SLO Brew this week, kicking off with returning favorite Collie Buddz on Thursday, Oct. 27 (7 p.m.; all ages; $25), with opening act Gappy Ranks. Bermuda-born Buddz’s infectious reggae has managed to climb the charts everywhere from the United States to Japan to Germany. It doesn’t matter who hears him or where, they fall for his hip-hop and soca-laden sounds.

Things turn classic California when The Mother Hips return to the Brew on Friday, Oct. 28 (7:30 p.m.; 21-and-older; $15 presale or $17 at the door), with The Soft White Sixties opening. It’s hard to beat the Hips for sheer California breezy exuberance. Capturing the ’70s psychedelic power pop sound, they nonetheless manage to sound fresh. 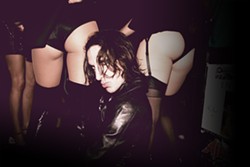 But don’t relax yet, because the Brew turns up the dark side on Saturday, Oct. 29, when gothic rapper Mickey Avalon crawls into the club (7:30 p.m.; 18-and-older; $25) with Group Home Music opening. You might remember Avalon’s song “My Dick” (also featuring Dirt Nasty and Andre Legacy), which was featured in the 2008 movie Harold and Kumar Escape From Guantanamo Bay.

Of course, the show I’m most excited about happens next Thursday,
Nov. 3, when Shurman brings their ripping country rock to town (7:30 p.m.; 21-and-older; $8 presale or $10 at the door) with Mother Corn Shuckers opening. Formerly of L.A., the band moved to Austin a while ago, where they effortlessly slid into its fertile music scene. They’ve been cooking up a new album, logging 200 shows a year, and just cranking out awesome music.

Steve Key’s Songwriters at Play showcases kick off on Thursday, Oct. 27, at The Porch, with Seattle’s Jean Mann, plus Connley Simpson, Eugene Christopher, Shannon Savage, and a few others (6:30 p.m.; all ages; pass the hat).

Martin Paris is a truly gifted guitarist, and he’ll be returning to Sculpterra on Sunday, Oct. 30 (1 p.m.; all ages; pass the hat). It’s pretty much a perfect match since Martin’s latest CD, Guitarist Off the Vine, is directed at the winery crowd. Blending pop, folk, blues, ballads, and Celtic arrangements, he’ll wow you with his picking prowess.

Indie rock act Slow Trucks returns to town on Thursday, Oct. 27, at Z Club with local act smAlls and Portland’s Yeah Great Fine. Slow Trucks continues to tour in support of their full-length debut Hard. If you like bands “with 2/3 time-signatures, French horns, and yelpy vocals, but sometimes a hook cranked through a big muff pedal, liquid bass lines, and a pummeling backbeat,” Slow Trucks is the act for you.

The Salty Suites plays Haven Wine Bistro in Atascadero on Thursday, Oct. 27, and D’Anbino in Paso (8 p.m.; $10 or $5 for members) on Friday, Oct. 28. The Salty Suites features 19-year-old mandolin wizard Scott Gates, who played with the Steve Martin Band on the Ellen DeGeneres Show and was a featured player on the last couple of Kenny Loggins CDs.

Gather Wine Bar is host to amazing local singer-songwriter Loren Radis, whose song “(May I) Walk You Home” won third place in this year’s New Times Music Awards Americana-country-folk genre (he also won an award last year!), on Friday, Oct. 28, from 7 to 10 p.m. “It’s going to be awesome because Gather is such a great place to hang out, and they have an incredible variety of wines from tons of local winemakers,” Loren said. “They’ve got a great dinner menu, too, and the room is just so relaxing and conducive to a fun atmosphere.” Loren’s a fan of Iron & Wine, Elliott Smith, and Damien Rice, which might give you an idea of what he sounds like.

Singer-songwriter Robi Duganne, leader of Narrow Bridge, performs on Friday, Oct. 28, at 8 p.m. in Linnaea’s Café. Robi’s been performing on the Central Coast for more than 15 years, first with Night Gypsies featuring Val Johnson and then with BellaDonna featuring Donna Meazell. Come see Robi passionately deliver his music with “an edgy kind of smoky voice … and fluid guitar styling.”

If you’re wondering what those crazy college kids are up to when they’re not marauding through downtown or speeding through your neighborhood, head to Harman Hall of the Performing Arts Center at 8 p.m. on Friday,
Oct. 28, for a musical extravaganza emceed by Music Department Chair W. Terrence Spiller. The Parents Weekend Ensemble Showcase will feature all Cal Poly Music Department major performing ensembles: the Cal Poly Symphony, Cal Poly Choirs (PolyPhonics and The University Singers), University Jazz Band I, the Arab Music Ensemble, and the Cal Poly Wind Ensemble. Tickets are $15 and $13 for the public, $14 and $12 for senior citizens, and $8 for students (756-2787).

On Friday, Oct. 28, Sweet Springs Saloon presents Los Osos native Katie “Super Power Girl” Franklin with rock-soul-punk-jazz act Matthias & The Cry and indie folk rock by St. Vincent Folk. There’ll be a costume contest, and people are encouraged to dress for a psychedelic groovy dance party. The doors open at 8 p.m. and the music starts at 9.

The Kicks will bring their bubbling reggae sounds to Frog and Peach on Friday, Oct. 28. Fronted by Reese Galido, this dub-tastic act is one of SLO County’s hidden reggae treasures.

People just can’t get enough of the Beatles. Sure, they broke up more than 40 years ago, but they’re still a seminal inspiration for up-and-coming bands. One of their most beloved albums, Abbey Road (1969), was put together when the band was barely functioning, but the tight little nugget featured classics like  “Come Together,” “Maxwell’s Silver Hammer,” “Octopus’s Garden,” “I Want You (She’s So Heavy),” and “Here Comes the Sun.” On Saturday, Oct. 29, at 8 p.m., the Clark Center will be host to Abbey Road—A Tribute to the Beatles, which features “tight harmonies, flawless note-for-note renditions of Beatles hits, custom-tailored costumes, vintage instruments, and precise attention to every detail.” You can’t see the real Beatles live, but you can get close with this show. Call 489-9444 for tickets ($32 to $45).

D’Anbino features a night of wine and song with Ann Kelly on Saturday, Oct. 29, from 8 to 10 p.m. According to press materials, the singer-songwriter “has dark, sultry, deeply emotional vocals. She performs a unique blend of pop, jazz, and blues.” She’ll be joined by Emmy Award-winning composer and keyboardist Mark Ross, Emmy Award-winning composer Danny Pelfrey on sax, guitarist Adam Levine and drummer Dean Giles, both of Human Nation, and SLO Symphony bassist Ken Hustad ($10 or $5 for members).

DB and the Struggle hits Frog and Peach on Saturday, Oct. 29 (10:30 p.m.; 21-and-older; free). “We’re a reggae rock four-piece from Fresno,” said front man Carlos “DB” Montano. “We recently completed a North West mini tour from Tacoma, Wash., down to Fresno. We’re on YouTube and Facebook.” If you like Sublime, Fishbone, and Slightly Stoopid, check ’em out!

What’s your super power? Personally, I’d want the power to control time: to stop it, slow it, travel through it. On Sunday, Oct. 30, get your super power figured out and head to The Cliffs from noon to 4 p.m. for the Live on the Rocks annual Superhero Costume Party with Truth About Seafood and Forrest Day. This show is free!

On Sunday, Oct. 30, Cuesta’s Friends of CPAC (the community college’s new theater) are presenting their first fundraiser to benefit the Cultural & Performing Arts Center. Called “GleeFull Sing Out! A Benefit for Cuesta’s CPAC,” the event features Inga Swearingen, the Sherwoods, Canzona Women’s Ensemble, SinNombrE, and Voce presenting classic choral and solo jazz repertoires from 2:30 to 5:30 p.m. in the CPAC. Parking is free, and tickets are $20 (or $10 for students). Call 546-3195. There will be a silent auction for items ranging from a seven-day time-share in Tahiti to Kalibre jewelry from Arizona, wine tours, a house concert, and more.

On Wednesday, Nov. 2, 12-string guitar virtuoso Dan Grigor will bring his goosebumps-inducing show to The Pour House in Paso Robles from 7 to 9 p.m. According to his press materials, “His particular blend of ‘lights-out’ blues and jazz is a delightful mix of tradition and riffs that stretch the boundaries just a little. Flatpicking or fingerpicking, Grigor’s right hand is an amazing display of 12-string savvy. Borrowing percussive fretboard tapping technique usually reserved for metal shredders, Grigor finds a way to seemingly play three parts at once as he taps, strums, sings, fingerpicks, and knocks all at the same time.”

Also on Wednesday, Nov. 2, head to Frog and Peach at 9 p.m. and soak up the sounds of Fantazzmo. “Do you remember a time when music had the power to set your soul free?” asks Fantazzmo’s press materials. “Guitarist and lead singer Sergio Bedolla does, and he intends for you to as well. Infusing the swagger and vibe of a bygone era with the power and angst of modern alt-rock, Sergio has created a rock ’n’ roll alter ego to do just that: Fantazzmo.” Fans of the Beatles, the Rolling Stones, Led Zeppelin, 311, Sublime, and Rage Against the Machine will enjoy Fantazzmo’s mash-ups of rock, pop, R&B, jazz, funk, and hip-hop.