Live musical performances are a special breed of art. The stage is where an artist’s talents really become apparent. Any yahoo can step into a studio and cut a track, but only a true musician can bring the same energy and passion off the vinyl and onto the stage. 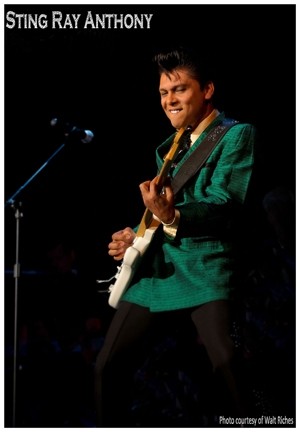 I’ve seen some great live performances, even by musicians of whom I was only moderately fond. There are musicians I would love to see perform live, but never will, because that they aren’t with us anymore. Television and second-hand accounts are all I will ever have of these shows. But there is something that can be done to satisfy such a concert fantasy: Juke Box Rock, a tribute to ’50s rock’n’roll.

Arroyo Grande Community Hospital is celebrating 50 fine years of health services with a concert at the Clark Center. Juke Box Rock is a show that will have you tappin’ your toes and bee-boppin’ along to music from such prominent ’50s acts as Elvis, the Everly Brothers, Jerry Lee Lewis, and Chuck Berry. The star of Juke Box Rock, Sting Ray Anthony, is a talented guitarist with a dead-ringer impression of Ritchie Valens. You know, that cat who sang “La Bamba.”

Proceeds from the show will benefit Arroyo Grande Community Hospital, which opened in 1962 and strives to provide services that help maintain the health and camaraderie of the community.

Juke Box Rock will be rockin’ and rollin’ on July 28, 7 p.m., at the Clark Center, 487 Fair Oaks Ave., Arroyo Grande. Tickets start at $29, and the $75 tickets buy the best seats in the house and admission to a pre-show VIP reception. For tickets, contact the Clark Center box office; 489-9444 or clarkcenter.org. For more on Juke Box Rock, visit stingrayanthony.com.