Stoke for the art community

Chris Burkard’s photographs represent something different to each viewer. For a surfer, the images of waves as smooth as glass, made green by the light of the sun behind them, will have a decidedly stimulating effect; if images of waves and sand feed a surfer’s addiction, then Burkard’s images may just be a potent combination of catnip and caffeine to voyeuristic surfers. For admirers of quality photography and art, Burkard’s exhibit at Paso Robles’ FireFly Gallery should represent a refreshing alternative to myriad—not to mention indistinguishable—landscape photographs that somehow find their way into local galleries. The colors are brighter, the perspective unique, and Burkard’s waves are alternately pools of silk or arches of sculpted glass.

For Burkard, each photo recalls the time and place when it was taken—Sonoma County, Dubai, Morro Bay, Canada, and Thailand, among various exotic and local coastal locales.

“It’s a great thing to be able to make a living doing what I love but what it comes down to for me is I can recall a time when I was really happy,” he explained.

The 22-year-old professional photographer has already accomplished more than many artists twice his age; when he was 20 he was the recipient of a $5,000 grant given in memory of photographer Larry “Flame” Moore, at 21 he was hired as a senior staff photographer for Surfline and Water Magazine, and next January Chronicle Books will release a 225-page coffee book titled, The California Book Project, documenting Burkard’s travels along the California coast with friend Eric Soderquist. 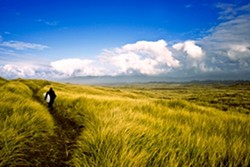 Despite the fact that Burkard doesn’t want his work relegated to the genre of surf art, the fact that he is a photographer is due, in large part, to the fact that he was a surfer first. Burkard, who grew up in Pismo Beach and recently moved to Arroyo Grande, began surfing as a child, maintaining a casual relationship with the sport/ hobby/ lifestyle until his senior year of high school. Similarly, he dabbled in art in high school, taking art classes and drawing. But he knew that the odds were against his ability to support himself through his art, so he didn’t invest a great deal of time in it.

When he had planned a trip to Mexico with several friends Burkard decided he needed a camera to document their experiences; he participated in an auction for a camera at Goodwill and won.

“I was really stoked,” said Burkard. And though he took a lot of pictures with the camera, he insists that he didn’t produce a single image worth keeping.

“Needless to say, my first experience was not really promising,” he added. Rather than give up, Burkard decided to purchase a better quality film camera, which he insists was a more useful learning tool than any digital camera would have been. As an artistic medium, photography suited Burkard perfectly; it was hands on, enabled him to be outdoors, and fulfilled his desire for self-expression.

Currently, Burkard spends an estimated six months each year traveling on assignment, photographing the most beautiful waves in the world and documenting his travels with photographic souvenirs. When you tell him that he has a ridiculously cool job he acknowledges it, but with a wry expression, describing the experience of packing $30,000 worth of camera equipment and a small bag of clothes and enduring 18-hour flights in order to arrive in a Third-World Country. When he arrives in these countries, he knows that he has to return with the goods, despite being at the mercy of uncontrollable elements like the wind, waves, and sun. And for Burkard, any old surf photos simply won’t do.

In order to distinguish his images from standard surf art, Burkard’s goal is to create timeless images. He shoots silhouettes to enable viewers to place themselves in the photo, traveling a grassy path with a surfboard in tow or riding a wave against the setting sun. Whether you’re 16 or 65 years old, new to the lifestyle or a surfing champion with accolades to recommend your talent, the image should hold some resonance, some familiar appeal. He also likes to create a narrative with his images.

“The moments before and after surfing are what define surfers,” he explained. “I don’t always care about how they surf. I just like the idea of people surrounding their whole lives around the ocean.” In many of his photos a surfer walks along a coastal trail, surfboard in tow, in the first light of dawn. His images tell of surfers’ dedication and passion for their hobby, rising early and traversing unpaved paths in their pilgrimage toward the water. His images tell another tale as well, of nature’s beauty; from a flock of birds rising across the skies of Sonoma County to the golden purple haze of clouds falling away from an airplane wing over Dubai, even the images that don’t depict a traditionally beautiful landscape convey an innate appreciation of nature.

And with a mere 22 years behind him, and the release of his first book ahead of him, it’s impossible to predict the future journeys his camera—and the ocean surf—will bring him.

INFOBOX: Get on board

Arts Editor Ashley Schwellenbach thinks that sharks are Buddha’s way of saying “Stay out of the water.” Send shark repellant to aschwellenbach@newtimesslo.com.