As a meaty swell descended upon the California coastline on Oct. 8, Cal Poly surfer Nick Mestre dropped into a sloppy, head-high wave at Black's Beach in La Jolla. A 6-foot shortboard was under his feet, a 4/3 wetsuit was on his back, and the pride of the Cal Poly Surf Club was on his shoulders.

The freshman engineering major made the most of the poor conditions as he made a big bottom turn, hit the lip, and pulled into the green room--sneaking into a semi-shack and a score of 6 in the process.

This was the first heat of the first contest of the 2007/08 National Scholastic Surfing Association Southwest Conference California College Team Season Schedule. At the end of the two-day event, Mestre didn't advance out of the first heat, but the Mustangs finished eighth out of 27 colleges.

"We were impressed because it was our first year, and we were glad to do that well but know we can do even more," Mestre said.

Let's take a couple of steps back.

Despite having an abundance of surfers and easy access to some of California's best waves, Cal Poly has never had a surf team--until now. Early in the 2007 fall quarter, Mestre, though only a freshman, organized a team, held tryouts, and filled out all the legal paperwork that comes along with such an endeavor.

As of right now, there are two teams for Cal Poly--an A and a B, each of which is made up of six shortboarders, two female surfers, and one longboarder.

The teams compete against 27 other college teams in the 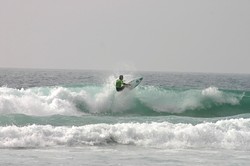 In an effort to ensure a smoother ride for Cal Poly surfers, SLO Surf Shop hooks the squad up with discounts on boards and gear, Trader Joe's donates $100 of food for the contests, and Monster Energy donates drinks to get the riders buzzing for the big events.

But despite the hand-me-down goods and hefty discounts, road trips are still pretty costly for financially strapped college kids.

"Fees to join the league are $150 a person," Mestre said. "Then there's gas and food. Most of us are from Southern California, so we just crash at our parents' houses on trips. It's 100 percent independent."

Still, Mestre said he wouldn't have it any other way. 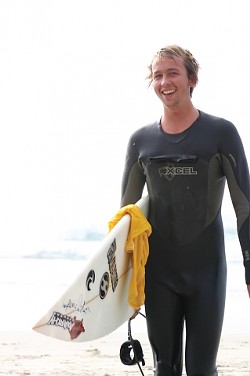 # "It's cool to get a sport like surfing to bring everyone together," he said. "A lot of kids I grew up surfing with go to different colleges. It's fun to compete with them. I wouldn't change anything."

"It's the type of sport that works the entire body," the third-year business administration student said. "It uses a lot of similar muscles involved with swimming: shoulders, chest, abs, legs. Also, your lungs have to be in shape."

"In Central California, the waves are a lot bigger than what other schools south of here are surfing," he said. "Surfing bigger waves on a regular basis keeps us in better condition."

In addition to the plus-sized surf Cole and his teammates are regularly exposed to, there's also the frigid chill factor of Central Coast waters. On most mornings, the Mustang surf squad is bundled in hooded sweatshirts as they scope the local surf scene. They throw on thick wetsuits--often paired with booties and hoods. Though these chilly conditions make the endeavor a little more challenging, Cole said he believes they also toughen up the team.

"In the cold, you definitely have to take shorter breaths," he said. "It really fatigues the entire body more, but it makes us appreciate the warmer waters when we compete down south."

Kai Beech was made for plus-sized surf. Send comments to kbeech@newtimesslo.com.