I was still in my 20s when I got started at New Times, just a fresh-faced Cal Poly kid spending way too much time trying to finish my English degree, working as night manager in a downtown nightclub, sporting a sensitive ponytail, immersed in music and literature and art. So. Damned. Idealistic. Hell, I even feigned smoking clove cigarettes, wore a trench coat, and obsessively read Sartre’s Nausea.

“Man is condemned to be free; because once thrown into the world, he is responsible for everything he does. It is up to you to give [life] a meaning.”

Believe me, I tried to give life a meaning! But that was 40 pounds ago when blood coursed through my arteries unimpeded. I could still run uphill then.

Now 20-plus-years later, I’m a broken man, cynical, doughy … a journalist. I have New Times to thank and blame for it! How did this happen?

I got my start because of a 55 Word Fiction story I wrote called “Werling.”

Fifty-five words exactly, each one starting with “w.” My wasn’t I fancy!?! But these days I write with the dogged, workmanlike prose of a journalist. New Times has beaten the English nerd out of me, trampled it right out, stomped it out, stamped it out. Out.

I may be better for it, because no one likes that much alliteration. But that wasn’t my only lesson.

I finally realized the responsibility of being a journalist when my duties began to expand beyond writing the music column, when I started writing theater and art reviews. One of my first “big” stories was when I decided to go to our local art Mecca, Cambria, and visit every gallery.

Being a young know-it-all with subscriptions to Art News, Art in America, and Art Forum, I flew into Cambria with both guns blazing, dismissing its galleries as being filled with dull seascapes and banal floral still-lifes. To call the fallout devastating would be an understatement. Cambria businesses pulled their advertising, and I became persona non grata in Cambria. But to his credit, New Times publisher Steve Moss stuck by me.

He did tell me I was an idiot because Cambria never tried to present itself as a cutting edge art Mecca, wasn’t comparing itself to New York or Paris or even Carmel. He was right. I was a stupid punk who had trashed a wonderful community of artists in print because they weren’t Jackson Pollock, Cy Twombly, or Robert Motherwell. 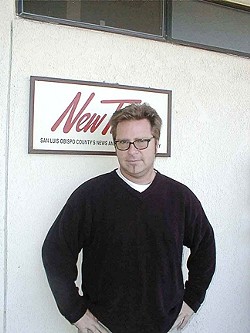 Over my 20-plus-year tenure, New Times became an incubator of my ideas, my educator, my raison d’être. It also became a place where I learned what raison d’être meant, and more importantly, what proper English expression meant. No offense, Cal Poly English Department, but it wasn’t until I was being hammered weekly by my editors over my substandard grammar that I bothered to absorb the rules of English.

Because of the confidence I gained churning out page after page of prose about local music, art, theater, and film events—and because of the ridiculously poor pay offered to journalists—I was inspired to return to Cal Poly and get a masters degree, which for the last dozen years or so I’ve used to teach subsequent generations of Cal Poly students how utterly freaking boring it is studying grammar, but how totally fun it is to write about things you love.

Which brings me to my next point: Everyone wants my job. “Can you, like, go to any show you want for free?” Yes, I pretty much can. “Any movie for free?” Yeah. “And you get to interview artists?” Yep! “Man, that’s so awesome. I wish I had your job!”

For a while, I tried letting people do my job. After Arts Editor David Vienna left New Times for greener pastures, the weekly film review column he invented—Split Screen—became my baby, and instead of finding a permanent replacement, I opened the co-reviewer’s spot to anyone from the community who was interested. Surprisingly, it was a real pain in the butt.

Some guest reviewers were great—insightful analysis, thoughtful interpretations, and astute observations! Others didn’t really know what to say. The idea of reviewing a film was a lot more fun than actually doing it. And that’s what I tell people: I love my job, but it’s a job. Some weeks, I don’t feel like going to a movie, and some Friday and Saturday nights, I’d rather stay home.

I definitely don’t have the energy I used to, I drink more than I used to, and I’m more cynical than I used to be. But I still love, love, love what I do. Maybe Hunter S. Thompson said it best: “The music business is a cruel and shallow money trench, a long plastic hallway where thieves and pimps run free, and good men die like dogs. There’s also a negative side.”

Here’s hoping I can make it another 20 years. Cheers!