Stop by a wine shop made new

Find more than bottles to go at Central Coast Wines 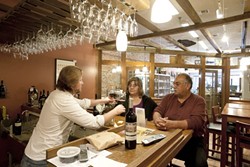 Central Coast Wines on Higuera in San Luis Obispo has been dedicated to promoting the Central Coast’s fine wines for more than a decade. Vaughn and Sasha Taus founded the shop; two years ago, they sold it to Bob and Dianna Ritchie, formerly of Arizona. Interestingly, the Ritchies were vacationing here when they bought the wine shop. They loved the region so much, they decided to move here permanently.

“We didn’t know what we were doing, although Bob had some experience from owning a grocery store,” Dianna recalled. “We went back to Arizona, sold our home, sold our store to the Bashas’ grocery chain, and moved here.”

In hindsight, Bob noted: “I had 30 years’ experience in retail, and we both loved wine forever. I can’t think of another business we’d rather be in than this one because of the people we work with in this business.”

They recently remodeled the shop and transformed the popular space’s dark and dusty atmosphere into a contemporary, open, and relaxed ambiance. On Nov. 20, the Ritchies will hold their grand re-opening at Central Coast Wines. Bob said they’re planning to offer 12 wines at $12 each to celebrate the shop’s 12 years in business.

“We’re going to have $12 wines by the bottle, two glasses of wine for $12, and samples of Cal Poly cheeses and olives,” Dianna enthusiastically said of the upcoming celebration. “We’re always working at finding specialty foods from local producers, like Cal Poly, and pairing them with interesting wines.”

During the grand opening, wine specials will be offered all day, but food samples will be served only from 1 to 5 p.m.

The wine shop will remain focused on Central Coast wines from Monterey, San Luis Obispo, and Santa Barbara counties. But now they carry a selection of imports and Northern California wines to provide more choice for local wine lovers.

“We’ll still have 90 percent of our wines from the Central Coast,” Bob said, “but we wanted to add some alternatives for everyone who shops here.”

Helping them with the celebration is their new shop manager, Ryan McMichael, who was hired in early September. The wine-savvy 30-year-old became interested in the local wine industry while working for several popular SLO restaurants. He created a great new wine menu for the shop.

“We’re trying to augment Central Coast-grown varieties with those from the source of origin,” McMichael explained. “For instance, we’ll offer a Paso Robles-grown Albarino from Bodega de Edgar and an Albarino from La Cana in Rias Baixas, Spain. Or you can try a Rhone blend like Qupe Los Olivos Cuvee next to a French Cotes du Rhone from Andre Brunel.”

The by-the-glass menu offers each choice for $8: a six-ounce glass, two three-ounce glasses, or you can mix-and-match to taste the wines you’re most interested in trying.

McMichael explained: “I try to keep the vintage and varietal the same, and keep the production of the winery in mind.”

He pairs small boutique producers with similar producers rather than putting them up against large production wineries. He wouldn’t match up Bodega de Edgar’s wines with Gallo Wine Company’s wines, for instance.

McMichael spent the last decade working at local restaurants like Lido, Mission Grill, and Novo. He relocated here from northern Los Angeles to attend Cal Poly, and, like the shop owners, liked the region so much stayed. He spent the previous two years at Novo as the wine and beverage manager. When the Ritchies began looking for a wine shop manager, McMichael gave up that job for a career in the wine business.

“I think wine education is just as fun as drinking, and many people my age are really interested in wine,” he said. “We have a thirst for knowledge and education—not just about wine, about everything.”

He pointed out that the shop can attract a huge audience of Millennials with Cal Poly close by. McMichael believes his peers are interested in both quality and good values.

“When I go to a wine shop and learn something new, I really like that,” he said. “That brings me back time after time. I really want this shop to be that kind of place. All of the pieces are in place for it to happen. We have to start paying attention to the Millennials and our older wine aficionados.”

The Ritchies gained an impressive cellar of library wines when they bought the wine shop.

“We’ve got the largest selection of Central Coast wines that I know of, a total of around 500,” Bob said proudly. “We have 200 selections just in library wines.”

Among the library wines are gems like Alban, L’Aventure, Seasmoke, Saxum, Turley, and their most expensive selection, Cristal Champagne at $259.

“We always try to keep the standard wines in stock that everyone wants, but we regularly bring in new wines to provide plenty of options,” Bob said.

Good deals will abound during the grand opening. Among the $12 wines they’ll be offering are Morgan 2008 Cotes du Crows Monterey County; Cal Poly 2006 Pinot Noir San Luis Obispo County; and Minassian-Young Vineyards 2006 Cabernet Sauvignon Paso Robles. Interesting wine offers run all day long, and some of the wines normally priced at $8 will be offered for $4 a glass. Bob said he believes that’s the by-the-glass wine price the Tauses offered when they opened the wine shop in 1998. Case purchases (12 bottles), normally 10 percent off, will be sold at 12 percent off during the celebration.

Besides the great list of wines, the shop offers Sprecher microbrews and gourmet sodas, local artisan foods, and a consumer-friendly wine club. Guests can choose from several levels of membership to get two, four, or six wines shipped quarterly. Thursday evenings, their “winemaker pourings” run from 6 to 9 p.m., except Thanksgiving Day. Dianna remembered how helpful the winemakers and wine reps with local distributors were when she and Bob began managing the wine shop.

“The people in the wine business are so great, and they’re eager to teach and help you understand the business,” Dianna finished.