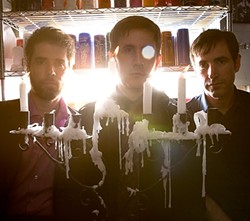 In The Mountain Goats’ “Dance Music,” frontman and songwriter-in-chief John Darnielle sings, “Alright I’m on Johnson Avenue in San Luis Obispo/ and I’m five years old or six maybe/ and indications there’s something wrong with our new house/ trip down the wire twice daily/ I’m in the living room watching the Watergate hearings/ while my stepfather yells at my mother/ launches a glass across the room, straight at her head/ and I dash upstairs to take cover/ lean in close to my little record player on the floor/ so this is what the volume knob’s for/ I listen to dance music/ dance music.”

Darnielle, who at one time hoped his “day job” would be as a poet, now uses his literary talents in service of song, and he’s clearly got a knack for conjuring a time and place not only literally (mid-’70s Watergate; think Ang Lee’s The Ice Storm) but figuratively as well (inside the mind of a scared kid hiding from his parents’ disintegrating marriage).

The Durham, North Carolina-based band is essentially Darnielle and a select group of rotating bassists (Peter Hughes, Rachel Ware) who tour around playing his quirky, infectious songs. See The Mountain Goats at Downtown Brew on Friday, Nov. 13 (7:30 p.m.; all ages; $16 presale or $18 at the door). This is kind of a big deal since they’re only playing three Cali shows, and the other two are at way bigger venues (the Henry Fonda Theatre and the Fillmore). Final Fantasy opens.

Jamming, looping fav Keller Williams returns to the Brew on Sunday, Nov. 15 (7:30 p.m.; all ages; $20 presale or $23 at the door). Thanks to technology and a whopping pile of talent, Williams is able to play various instruments into a recording device that plays them in a loop as he layers more instrumentation on top until he creates a near-orchestral wall of sound. If you’ve never seen him, it’s an awesome sight to behold.

And mark your calendar for The Flobots next Thursday, Nov. 19 (7 p.m.; all ages; $18 presale or $20 at the door). The progressive hip-hop ensemble features two emcees, a phat R&B backing band, a classically trained violinist, and a jazz trumpet player. Hip-hop backed by live music? That’s right, so damn right.

Now celebrating their 13th year together, Ireland’s Aodh Og O’Tuama and California’s Christy Martin—aka the husband and wife duo Four Shillings Short—have lined up a bevy of local shows: On Thursday, Nov. 12, they’ll play on KCPR 93.1FM from 10 to noon on Musica Americana; Friday, Nov. 13, they’ll be at the Pour House from 7 to 10 p.m.; Saturday, Nov. 14, they’ll appear on KCBX 90.1FM for Song Town from 2 to 4 p.m.; later that night they’ll do a benefit concert for the Cuesta College North County Chorus at Castoro Cellars from 7 to 9:30 p.m. ($20; call 238-0725); and Sunday, Nov. 15, catch them at the SLO Down Pub from 5 to 8 p.m. The multi-instrumentalists will take you on a musical trip around the world.

“I haven’t played in SLO since February, and it was such a good crowd,” said singer-songwriter Amy Obenski, who’s returning to Linnaea’s Café on Friday, Nov. 13 at 8 p.m. She plays “flowing, soothing, and introspective original songs in a jazz-influenced folk-groove style.”

Morro Bay Sings Joni is a living tribute to amazing singer-songwriter Joni Mitchell, scheduled for Saturday, Nov. 14 to benefit the Morro Bay Community Foundation, which provides recreational scholarships to financially assist needy families in Cayucos, Los Osos, and Morro Bay by offsetting the cost for their children’s participation in the Morro Bay Recreation and Parks Department’s recreational activities, as well as school age licensed childcare. Tickets are $20 presale (at Ruddell’s Smokehouse, Coalesce Bookstore, and Volumes of Pleasure; or call 234-2980) or $30 at the door. Come at 5 p.m. to enjoy food and drink, or come at 7 and see four talented singer-songwriters along with their friends each play a set of Joni Mitchell songs. Hear Allison Keller and her husband Dan (of Cuesta Ridge); Raeme Miner (of Resination); Jody Mulgrew; and Lindsay Tomasic. 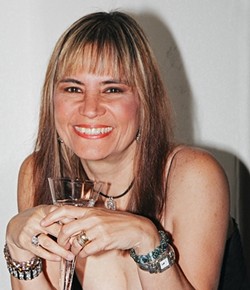 Vocalist Margie Nelson joins the Michael Raynor Group on Saturday, Nov. 14 from 7 to 10 p.m. at the Clubhouse, dishing out tunes made famous by Sinatra, Patsy Cline, the Beatles, Diana Krall, and more. 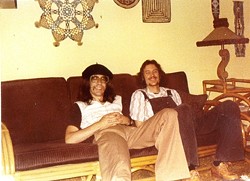 If last week’s Ian Anderson/ Jethro Tull show at the PAC whet your whistle, you’ll want to keep the vibe going when the Cambria Pines Lodge brings its own Jethro Tull tribute to the stage with founding member Glenn Cornick playing with longtime friend, Atascadero resident John Wessel on Saturday, Nov. 14 at 8 p.m. Calling themselves Locomotive Breath, they’ll play songs from the first four Tull albums as well as selections from Aqualung. “Glenn will be available to sign autographs after the show, so bring your old album covers or whatever you want to get autographed,” said Wessel. Hear classic Tull songs by the band’s original bassist! Special guests Libros En Fuego, a fusion band with a Frank Zappa influence, opens. The cost is $10.

Nina Ryne and Jan Grigsby present an album release party on Saturday, Nov. 14 at the SLO Down Pub from 8 to 10 p.m. Titled Lost and Found, the record features both original material as well as select covers such as Bob Dylan’s Forever Young and Kate Wolf’s Give Yourself To Love.

Brand-new old-time bluegrass band Little Black Train plays two shows this weekend: Saturday, Nov. 14 at Sage Eco Gardens and Nursery’s customer appreciation party from 4 to 6 p.m.; and Sunday, Nov. 15 at the Steynberg Gallery (7 p.m.; $15 at the door). Made up of Central Coast players John Weed (fiddle), Kenny Blackwell (mandolin), and Stuart Mason (guitar), the band took its name from a traditional Carter Family gospel song. They fuse old-time Americana with Celtic and original pieces to produce what they have dubbed “oldternative” bluegrass.

The Ian McFeron Band returns to the Frog and Peach on Tuesday, Nov. 17 at 10:30 p.m. McFeron’s music, you’ll perhaps recall, has drawn comparisons to Bob Dylan and Ryan Adams. McFeron (vocals, guitar, piano) will be joined by the Texas fiddle and harmonies of Alisa Milner and the backbeat rhythms of Norman Baker (bass) and Mark Bateman (drums). 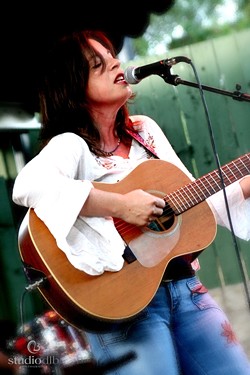 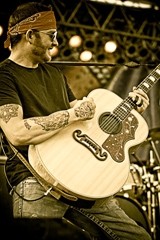 Red Dirt artist Stoney LaRue returns to the Graduate next Thursday, Nov. 19 for an 8 p.m. show. The Red Dirt movement hails from Texas and Oklahoma and has been gaining momentum in alt-country circles. LaRue is considered one of the best, which is pretty good considering his competition: Cross Canadian Ragweed, Jason Boland & the Stragglers, and The Red Dirt Rangers. You must be 18 or older. Tickets are $15 presale at all Vallitix locations or $20 at the door.

Get your ax restrung for soup

“Now more than ever our local Food Bank needs our help and support,” said Matt Franscioni of Matt’s Music Stage & School. “We’re creating a great incentive for you to help called ‘ReString For Food.’ On Saturday, Nov. 14, from 2 p.m. to 5 p.m., bring in a minimum of two cans of food and we’ll will inspect your guitar and install a new set of D’Addario Strings for free! That’s a $40 value!” Sweet. (No creamed corn, jerks!)

Glen Starkey is a unique snowflake, just like every other snowflake. Turn him yellow at gstarkey@newtimesslo.com.

Every few years, interest flourishes for artists whose international recognition only dented American consciousness. It was the re-issued catalogs of Fela Kuti and Serge Gainsbourg that ignited curiosity and culminated in new appreciation. Now, we see Ethiopian bandleader, arranger, keyboard, and vibraphonist Mulatu Astatke obtaining the career retrospective he deserves. From New York to Addis Ababa showcases Astatke’s development as he melded Ethiopian traditional melodies to Western jazz orchestration, and the unique sound he pioneered. Really, where else do you hear such an astonishing and unique range of sound from one individual? The steel drum on “Asiyo Belema” recalls the Latin-jazz of Tito Puente, while the sentimental saxophone on ballad “Tezeta” would bring a tear to Ben Webster’s eye. “Ebo Lala” returns you to Addis Ababa with scintillating poly-rhythms and African vocals. Consider “Yegelle Tezeta” his hit: Punctuated with steamy sax runs, an exotica-grooved organ, and tight, crisp drum beat, it’s the amalgamation of all his influences tuned perfectly. 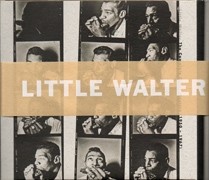 Expanding the vocabulary and sonic innovation of the toy-like harmonica, Little Walter stands next to Jimi Hendrix in changing the prevailing attitudes of what their chosen instrument could attain. Running his mouth harp through cheap microphones and over-stressed amplifiers, Little Walter blew and improvised like a jazz player; his phrasing swooped around the beat and anticipated the guitar melody with incisive, electrified shrieks and elongated wails. Eventually he landed not only the role as Muddy Waters’ sideman, but also became the house harpist for Chess Records recordings and launched himself into fronting his own band. Though the five-disc Complete Chess Masters lists itself as a near two decade collection, the heart of Little Walter’s repertoire is captured during his early to mid-’50s, where his kinetic harp racked up a string of R&B hits, often backed by his own lissome vocals. Packaged in a six-paneled foldout, this is a beautiful tribute to one of the under-acknowledged heroes of Chess Records.