Local writers and artists create tales from the cards they're dealt

Loteria: It looks like Tarot but plays like Bingo. Birds trill, shrimps scuttle, and cloven-footed devils stalk across each deck of 54 cards. The traditional Mexican game of chance usually prompts players to hope a caller will shout out the pictures they need to mark off a row and win (think of someone shouting “la calavera” instead of “B4!”), but more recently, it’s prompted writers and artists to shuffle their own imaginations to produce a work inspired by the luck of the draw.

The idea for the project technically started with me. I’d always thought it would be fun to create a series of short stories, each based on one loteria card. But some fellow New Times staffers got wind of that thought, and it spread from there. Soon, strangers were soliciting a loteria card from my deck, printed by Don Clemente, Inc. and bought at a carniceria in Santa Maria despite my studying French instead of Spanish throughout my schooling.

Everything spiraled from there, and everyone had an idea: Maybe we could publish the stories and art somewhere? Maybe we could hold a live event? Maybe readers could share their tales and we could hang the art? 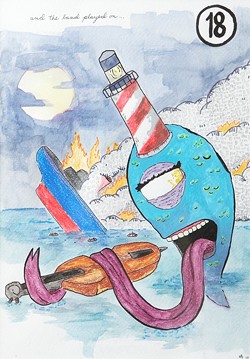 Since this project’s genesis, I’ve begun to resemble something of a comic-book villain, slowly shuffling a loteria deck wherever I go. The cards are colorful and slightly sinister. There’s a skull, and Death, and a scorpion. Thus, dark elements found their way into many of the stories. There’s also a strong Latin flavor to a lot of the works.

But there are unexpected voyages, too: to Japan, to small towns, into father’s minds and through childhood memories. A lot of the stuff is sad. Maybe writers are just, by nature, depressed. Or depressing. Or both.

The stories themselves, however, are intriguing, and the project itself has proven to be a happy one. Extending the offer to produce loteria-based songs to participants in a collaborative music website in February yielded dozens upon dozens of tunes from around the world. 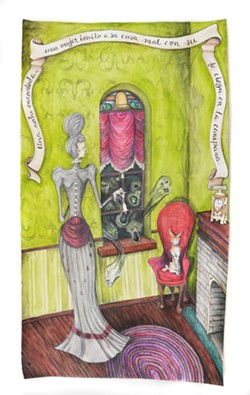 The best part about this project is that it’s not complete. We’re forging forward with a live event, prepping a website, and searching for new collaborators to cycle through the deck again and again, eventually building a body of work, each piece derived from one of 54 slightly kitschy cards.

NO. 52 The Flowerpot BY ANDREA ROOKS

I planned to endure the tour guide’s prattle only long enough to gather the tidbits of truth missing from my childhood deductions. Unlike most of my fellow tourists, I knew there were at least three other suspects in the Boddy murder, not counting the butler: American brothers George and Charles Parker, and the maid.

The Parkers were publicly dismissed from the list of suspects, but their presence at the mansion during the murder changed their lives forever. Some maintain that they made their fortune by popularizing their experience and inviting speculation from the public. The American brothers made families worldwide feel like a brood of budding detectives while ruining the lives of their fellow dinner guests. I think they were geniuses who probably saved the other suspects from the gallows. The fact that Boddy was never found helped a bit, too, I suppose. 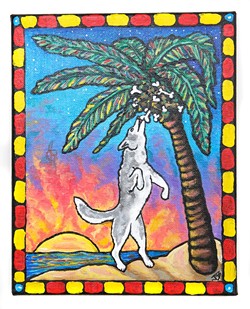 NO. 8 The Bottle BY JOSH OAKES

A squat bottle of green glass with a very narrow mouth, no neck and a thin foam label.

In 6th Grade, my hippie science teacher wanted to demonstrate how hard it was to avoid sugar and so started a Sugar Challenge. We would journal our food and the student who went the longest without eating sugar would win an unnamed prize. I believed I had more willpower than anyone in class and would win that prize easily…

NO. 47 The Crown BY COLIN RIGLEY

He tripped over himself running to snag one of the hats as if a crowd of crazed collectors were about to break down the door and trample him to steal the last one before he got there. Then, success. His arm jerked to the box and immediately to his head to put the stupid thing on.

There was nothing special. She sat at one of the rubber-coated wire picnic tables wolfing down rubber hamburgers and watching him skitter through the large plastic tubes flinging himself into ball pits filled with untold amounts of urine and spit and all the other things the doctors told her would be fine for the few months he wasn’t in a chemo cycle. She peered at hills in the west at the thin neon grass sliding out of the thick spongy soil still wet from a recent rain.

NO. 54 The Frog BY ROBERT MCDONALD

You have probably read about me in the local rags. I’m not as bad as you think. I’m not a monster. I’m not proud of what I did but it happened and I have to live with it. It can happen to anyone, really.

Executive Editor Ryan Miller has a lot on his plate, but wants the loteria effort to thrive. Contact him at rmiller@newtimesslo.com.