If you grew up in or around Atascadero between the late ’70s and the mid 2000s, you probably remember the Carlton Hotel in a very different way than youngsters do today. Back then, it stood as a symbol of disrepair and past grandeur. Its crumbling infrastructure represented the struggle between what Atascadero was and what it could be.

When the four owners of Street Side Ale House were enrolled at Atascadero, Templeton, and Paso Robles high schools, back in the early 2000s, the old hotel was still just a shell of its 1930s self, a skeleton that loomed over Atascadero’s sleepy downtown. 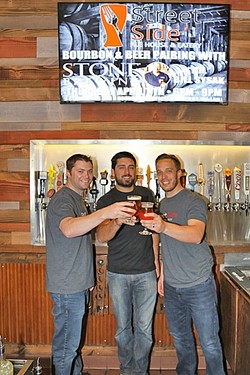 Some fifteen years later, all four of those kids—Trevor LaSalle, Eric Peterson, Taylor Reese, and Chris Durkin—have grown up, and they all walk past the now beautifully restored Carlton on their way to work every day. It’s a stunning reminder that things can change. In January of this year, the friends opened Street Side Ale House, the newest thread in what has become a vibrant tapestry of commerce nestled between Sunken Gardens and the iconic hotel.

“Downtown’s been lacking for restaurants for some time,” LaSalle said. “We needed something to bring people downtown and get the energy going again.”

Just down the block, hip coffee shops Bru and Socrates buzz with the sounds of espresso and discussion. The owners of Tent City Brewing Company and Whiskey & June write out the day’s offerings. People actually walk into the surrounding boutiques and art galleries. Life is returning to downtown. 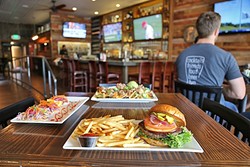 If you ask co-owner LaSalle, it feels good. He grew up in Templeton, and now lives in Atascadero, where he also co-owns Guest House Grill (located on the north side of town) with fellow Street Side Ale House co-owner Peterson.

“Since we’ve been open, there has been more foot traffic and more people frequenting all of the businesses,” LaSalle said. “Even parking is getting fuller than it was; and that’s not something you’d see before.”

Only in Atascadero is the lack of a parking space celebrated. What’s attracting so much commotion? It could be the spicy curry lettuce wraps, beef and Gorgonzola sliders, and pulled-pork sandos. It could be the loaded mac and cheese or the old-school root beer floats. With cheesy carnitas nachos smothered in guac, 25 craft beers on tap (10 of which rotate), and more flat screens than you can shake a rosemary fry at, Side Street is a new kind of Atascadero hangout. 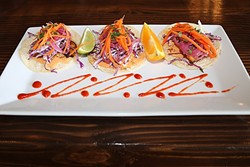 “We wanted to create a welcoming place where we could actually hang out,” said Reese, who left his corporate job in the solar industry to open the eatery. “Ale houses are so big right now. We have ’em in Paso and SLO, but there’s nothing like this in Atascadero. The closest thing is the Firestone Brewing Co. taproom, but they only have their beer. We offer more in the North County as a good place to grab a cocktail, a craft brew, and watch the game.”

These guys are not ashamed of their vast flat screen TV collection. Reese even joked: “You can stand anywhere in here and see a TV.” However, this is not a “sports bar.” Far from it. Streetside is more of a family hangout where the atmosphere is ridiculously casual. Soon, local bands will play on Monday and Tuesday nights. The vibe is: “no dress code, no pretense. Just sit down and eat.”

Co-owner/kitchen manager Durkin shed his old life in beer sales and working as a chef for others to create Street Side with his old buddies. He’s a cook who likes to create simple food that gets the job done. You won’t find much fennel pollen in his arsenal.

Although the haunt is known for its grilled cheese, Cubano sandwich, and epic burgers (your choice, lamb or beef), you can also grab a steak or chicken salad or a small plate of citrusy ceviche. I have to say, the snapper tacos with house slaw, macerated onions, pickled veggies, and chipotle Thousand Island dressing are perfect for a fresh, light meal on a hot Atascadero afternoon (and you can even get it on a gluten-free tortilla).

Oh, and then there’s the drinks, which rival any swank bar south of the grade. Mixologist James Barlow, formerly of Creekside Brewing Co., has whipped up a respectable list of creative cocktails, including barrel-aged Manhattans and beer cocktails, too. Yes, your new summer favorite just might be his mix of Sculpin Grapefruit IPA, Absolut Grapefruit vodka, and fresh Ruby Red grapefruit juice.

All the guys are stoked about the restaurant’s new back patio, slated to open this May. Currently Peterson, aka “the handyman,” is hard at work treating corrugated steel and cutting wood for the new eight-table outdoor seating area. Together with his dad, Peterson handcrafted all of the restaurant’s tables and wooden flourishes. Around here, everyone does their part, and there’s much to be done. Thankfully, a cold beer after a long day is never far from reach.

During those moments of reflection, the guys take stock of what they have and are thankful that, so many years later, they came together to create something vital in their homeland of North County.

“I really loved my corporate job,” Reese said. “But when you have a chance to start something like this with all the friends you grew up with, you do it.”

Hayley Thomas is not into sports, but can get down with Street Side Ale House’s badass smoked gouda burger, big time. She can be reached at hthomas@newtimesslo.com.