In Doyle’s version, the tale of the “Demon Barber of Fleet Street” is delivered in a new minimalist interpretation. 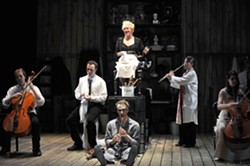 For those who don’t know the dark story’s premise, here are the basics: A 19th-century London barber turns to murderous revenge after a malevolent judge falsely imprisons him and takes his wife and child. Once freed, a much-changed Sweeney rents a space above Mrs. Lovett’s struggling meat-pie shop, and as Sweeney’s shaves turn to throat slashings, he partners with Mrs. Lovett, who soon begins turning out “the tastiest meat pies in London.” Mmm. Murdered rich people! Think of it as the anti-“A Modest Proposal.”

When Sondheim’s musical first came to Broadway in 1979, it featured a 27-piece orchestra and a 30-member cast. Doyle has streamlined the production to a trim 10 actor/musicians, including Merritt David Janes in the title role.Local audiences who saw The Wedding Singer may recall Janes as the lovelorn Jersey boy Robbie Hart.

Instead of moving through various sets and locations, the story is told in a bleak, run-down psychiatric ward. Doyle’s version begins with a young man bound in a straightjacket. The audience is asked to use imagination to follow the narrator’s tale of the vengeful barber and his barbarous acts. All ten performers stay on stage the entire time and play a variety of instruments (they’ve memorized Sondheim’s entire score) the action moves from various characters, highlighting some while others slip into the background.

According to Doyle’s press materials, “Originally produced at a small 216-seat theater in London, Doyle’s scaled-back production was born of budgetary necessity in a financially strapped regional theatre that couldn’t afford a large cast or orchestra. Doyle’s solution to the problem: Cast 10 excellent actors and 10 excellent musicians. Oh, and the actors and musicians need to be the same people. While this theatrical conceit was originally a result of monetary restraints, it became an artistic choice. This production has moved beyond that tiny theater to reach a wider world. To date, Doyle’s production has been met with critical and commercial success in London’s West End, Broadway, and now across the United States with its National Tour.”

Because they play, act, and sing, the performers’ instruments become narrative tools. Said Doyle, “It’s a positive way of looking at smallness and intimacy. What we’re all searching for, ultimately, is the honesty of the storytelling.”

Doyle added the success of the staging “is the need to make the audience do some of the work—we ask them to use some of their imagination. There’s no barber’s chair, for instance you can imagine it.”

Doyle’s innovative staging of this Broadway favorite has been called a “singular blend of precision, simplicity, and humanity.” When Doyle’s version hit Broadway in 2005, it won the Drama League, Drama Desk, and Outer Critics Circle Awards for “Best Revival of a Musical,” and was awarded a Special Citation by the New York Drama Critics Circle.

A pre-performance lecture by Cal Poly Music Dept. professor Alyson McLamore will be held in the Performing Arts Center’s Gallery Level Lobby at 6 p.m. Due to content, this performance is recommended for those age 14 years and older. Student and adult tickets for the performance range from $44 to $68 and can be purchased at the Performing Arts Center Ticket Office, by phone at 756-2787, or on-line at www.calpoly arts.org. 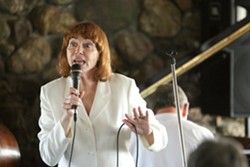 For 17 years, Charlie and Sandi Shoemake have been the Central Coast’s link to some of the best jazz players on the West (and frequently East) Coast. Hosting some 30 concerts a year, the jazz couple has brought in some incredibly talented musicians.

“It’s called the ‘Famous Jazz Artist Series,’” said Charlie recently, “but generally these players are famous [only] if you know jazz. I don’t think there’re hardly any major West Coast players who haven’t played here. I mean, we’re not bringing in Herbie Hancock—the cost would be prohibitive—but I think locals who read Downbeat magazine trust us to bring in top guys.”

When the Shoemakes moved to Cambria all those many years ago, they originally thought they’d “be like Red Holloway—use Cambria as a home base.” It didn’t take long for Charlie to recognize there was a need for great jazz.

“Some local guys found out I was here, and they had a job at a place that’s now closed, Ian’s,” recalled Charlie. “They said, ‘Gee, will you play with us?’ These were local guys, nice guys but not great players. Once you leave L.A., the talent tends to drop precipitously. But even with these guys, I started to see a lot of people coming in to see me. ‘Wait a minute,’ I thought, ‘if the interest in high-end jazz is so great that people are coming to see me with these guys, what would they do with big named fellas?’”

Charlie approached the owners of the Hamlet to try a little “experiment.” The Shoemakes would pay for the talent and keep the cover charge, and the Hamlet would make money on food and beverage. It didn’t always go smoothly.

“In the early years, Sandi and I lost quite a bit of money on some shows, but generally speaking we’re getting really good crowds,” said Charlie. “We’re down a little bit this year, but I think everyone is with the economy. Over all it’s worked out pretty damn good—everybody gets paid.”

This Sunday, Nov. 30, the Shoemakes play their annual year-end “all alone” concert at the Hamlet in Cambria—talent enough, believe me. Both Charlie and Sandi have impressive recording careers. And as an added treat, besides the Shoemakes on vibraphone/piano and vocals, this year there will be a surprise “mystery” guest added to the program. Oh, okay, I’ll tell you who: the Shoemakes’ grandson, 17-year-old Nick Shoemake, who’s attending a performing arts school in L.A.

New venue for you

Pat Cormick isn’t generally overly excitable, but he’s gushing about a new venue in Paso Robles: “Awesome, forever view and facility—must see to believe!” he said of Villa Valdemosa B & B Inn, an upscale bed and breakfast located at 2750 Old Grove Lane (on the hill overlooking Stillwaters Vineyards).

You know a band kicks ass when there are tribute bands to it while it’s still in business. Meet Generator, a tribute to still functioning Bad Religion. Formed in early 2008, Generator says it has been in the process of its own creation for almost a decade. The various members have played in various bands across California and Arizona, but during those years the audience was asking some of them to form a tribute band to “one of the greatest bands of all times.” Experience Generator this Saturday, Nov. 29, at 8 p.m. in Downtown Brew. This 21-and-older show costs $5 at the door.

After two years of ignoring us, Four Shillings Short is returning to the West Coast. The Celtic/folk/world music duo performs on a fantastic array of instruments from around the world, and this Saturday, Nov. 29, you’ll be able to hear the magic when they play a 7 to 10 p.m. show at Arroyo Grande’s SLO Down Pub (1200 E. Grand Ave 473-0107). The husband and wife duo of Aodh Og O’Tuama from Cork, Ireland and Californian Christy Martin “live as full-timebards in their Dodge Caravan loaded with an ever increasing array of musical instruments including hammered dulcimer, mandolins, Renaissance woodwinds, North Indian Sitar, recorders, tin whistles, banjo, guitar, charango, percussion, and even a bowed psaltry.” You’ll hear everything from traditional Irish and Scottish songs, tunes and airs Indian ragas folk ballads old-time songs medieval and renaissance instrumentals and a cappella numbers as well as contemporary folk and original compositions.

If you want to stick closer to SLO Town on Saturday, Nov. 29, but you still hanker for some old time folk music, check out Bog Thistle when the duo comprised of SLO natives Dylan Horst and Scott Conroy return to their old stomping grounds for an evening of original and traditional songs at Linnaea’s Cafe at 8 p.m. The two longtime friends just finished a 40-day, 55-show tour of the U.S. and recently performed live on KPIG radio. They wanted to let folks know that all songs are G-rated and family friendly.

Glen Starkey is rated NC-17. Contact him with adult supervision at gstarkey@newtimesslo.com.