Mysterious. Feminine. Ritualistic. Playful. These are adjectives that Diana Stanton and Jude Clark-Warnisher use to describe a single dance in their approaching seven-part (discounting interludes) show, Alchemy. The duo annually launches Variable Velocity’s eclectic dancers into hitherto unoccupied territories of intellectual and physical exploration, distilled from a particular theme. Last year, they danced their way into and through juxtapositions, and the year before that moved to the rhythms of “elements, forces, and other mysteries.”

While sketching out ideas for this year’s show, based on the concept of alchemy, they plan to leave no philosopher’s stone unturned, from the symbols that represent the materials and processes that alchemists utilized, to the birds identified with phases in the process to the oft-overlooked spiritual aspect of the quest. Both Stanton and Clark-Warnisher work from sketchbooks, blanketed in inky trails of ideas. Anything is potential fuel for the duo’s mental mastication, and no stray scrap of information or idea is discarded as excess.

The opening group piece is called, appropriately enough, Massa Confusa, a term used to describe the alchemists’ base substance—murky, black, uncertain. To initiate the process, Clark-Warnisher asked her dancers to imagine they were in a container; she videotaped their movements, simultaneously liberated and limited by the imagined confines.

“From these movements I designed a phrase. And that became the opening movement,” she explained. “That was about how we as individuals become confined by how other people define us.”

In the piece that follows—“Imminent Combustion”—Stanton’s dancers explode in a flurry of fast-paced motion dominated by peculiar movements. The modern dancer choreographed the piece a decade ago, but considers this second version, her renewal, silly rather than anxious, “bizarre, but funny.” Much of her choreography was preoccupied with the physical reactions between the chemicals, as reflected by the fourth piece, and second group performance, “Amalgamation.”

“She blew everybody up. Now she’s going to bring them back together,” Clark-Warnisher humorously sums up the dance.

Preoccupied with mercury, the slinky, silver chemical element, atomic number 80, Stanton explored human relationships through the context of the liquid substance. Her dancers break apart and meld together.

Between the breaking apart and coming together is an untitled trio which Clark-Warnisher finds mysterious, Stanton feminine. Inspired by Loie Fuller, a late 19th and early 20th century modern dance and theatrical lighting pioneer, they re-shaped skirts by rigging sticks into the fabric. This particular piece, according to Clark-Warnisher, represents the swan phase of the alchemical process.

Other birds that have become symbols for the endeavor and its various phases include the pelican (Christian symbol), phoenix (resurrection), peacock (a sudden iridescent display that misled alchemists into believing that success was at hand), and crow (the pitch darkness of the concoction in the beginning). While Variable Velocity isn’t the sort of dance company to paste on a few feathers and flap about the stage—too literal and not enough modern—the colors and significance of the fowl emerge through the choreography.

Perhaps the piece most strongly influenced by a particular bird is Clark-Warnisher’s solo, the show’s penultimate dance. Her choreography was inspired by the phoenix’s cycle of fiery death and rebirth. Working with a prop of undisclosed purpose and title, the choreographer draws a metaphor between the phoenix and an earth that is suffering because of its six and a half billion human inhabitants.

The relationship thread continues in “You + Me = We,” a duet that Stanton describes as “modern dance goes ballroom.” There are a few instances where Stanton’s male partner holds her in a position that suggests a classical dance pose. But it’s still worlds away from Dancing with the Stars material.

Unlike the alchemists that preceded them, by the end of a very physical evening of leaping, sliding, lifting, and rolling, the choreographer duo has definitively struck gold. Before plotting the finale, Clark-Warnisher papered the floor of the company’s rehearsal space with mandalas that corresponded to alchemical symbols. Each dancer selected a mandala and then created a movement phrase that corresponded to the symbol on the back, among them winter, mercury, silver, sugar, steel, spring, autumn, and egg shells—“I don’t think anyone took that one,” admitted Clark-Warnisher. These dances in miniature coalesced into a larger performance, one that would reflect the importance of the process, and ideas, that went into it. 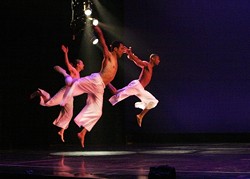 In short, Variable Velocity’s founders are doing precisely what they’ve been doing for the past nine years: thinking, planning, stretching, dancing, and yes, eating chocolate. All of this comes together without the resource of a classroom to supply them with young dancers and parents to supply an ever-useful cash flow. But the age, and body, variations lend the company’s collective movement a thoughtful quality. Variable Velocity evolves from year to year, while Stanton and Clark-Warnisher find themselves asking how they can remain expressive and interesting as they mature.

“We’ve been doing this for awhile and maybe our legs don’t go as high but the commitment that we bring hasn’t changed,” insisted Stanton.

Operating from their new home at Performance Athletics following the closure of World Rhythm and Motion Studio, the county’s modern dancers fulfill their stated purpose of posing an alternative to more commercially-oriented dance—sans shoes, tutus, and boundaries. In fact, the term dancer doesn’t always encompass all that they do; movement philosophers or explorers might be more sound.

But in one respect, Variable Velocity is like all other local dance companies: They’re looking for a few good men.