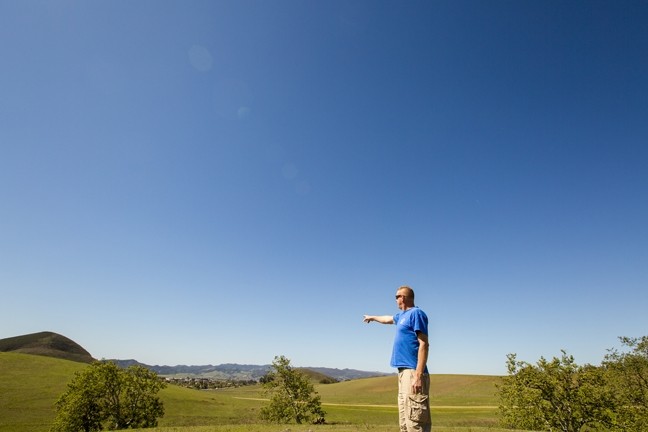 To read the letter submitted by project applicants, click here.

In a fiery statement released March 25, applicants for a proposed green waste composting facility planned just outside San Luis Obispo said they were throwing in the towel and withdrawing the proposal.

The project was slated for review at the March 27 SLO County Planning Commission meeting, where people living near the proposed site planned to show up by the hundreds to express continued vocal opposition. Residents promised a protracted fight and threatened litigation. In response, project consultant Joe Boud sent a letter on behalf of Tim Perozzi, the site’s landowner, and Ron Rinell of Bunyon Brothers Tree Service, announcing the withdrawal of the application for a conditional use permit.

The letter says the project, in the works since 2005, was intended to fit with the county’s larger goals for waste diversion and recycling.

“Our concept was pretty basic: composting. We would divert green waste material, the largest component of a community’s waste stream, from landfills and indiscriminate dumping and transform it into an organic, nutritious soil amendment product,” the letter reads.

The backers sought a permit for two 4-acre composting sites on the Perozzis’ 1,100-acre cattle ranch on Orcutt Road southeast of San Luis Obispo, and included a daily intake of up to 300 tons delivered by a maximum of 150 truck trips (75 trucks). The size of the project took neighbors aback, sparking a local campaign of opposition that cited such concerns as odor, truck traffic, noise, and unsightliness—all of which could lower the value of their homes.

Applicant Rinell said it was unlikely the project would ever grow to its full capacity. Regardless, residents didn’t feel that a composting operation was an appropriate use for the land, and that impacts would still be felt, no matter the size. Mary Lou Johnson, a real estate agent who lives on Huckleberry Lane, where her backyard faces the ranch, told New Times that in addition to the broad concerns, there were doubts that the project would comply with the county’s land-use guidelines, including the operation’s manure intake and how traffic impacts were assessed, calling it an “errant plan.”

“Composting on a commercial scale so close to residents is just not safe, and it’s not in the land-use guidelines,” Johnson said.

In a previous interview, when the application was still on the table and as Johnson and her neighbors were gearing up for the March 27 meeting, Johnson told New Times that even if the project did get approved, it would be challenged and that residents had already been shopping around for lawyers.

“We will appeal. We will litigate. We will do whatever it takes,” Johnson said.

The letter submitted by Perozzi and Rinell touched a deeper nerve facing the county: the general willingness and need for local efforts to ramp up composting, but the challenge of siting such an operation.

Noting that the facility was intended to make Perozzi’s agricultural land more economically viable—a challenge felt among certain members of the greater agricultural community—the letter waxed poetic on various elements of the “green waste management dilemma”: “Today’s urban/rural interface, with a hard urban edge that the City of San Luis has successfully created, places urban density developments adjacent to agricultural land. However, this doesn’t imply nor validate the notion that these rural, agricultural lands become the urban neighbor’s private open space preserve. What it does, though, is place a huge burden on the agricultural community and their necessary agricultural operation and ancillary practices, forcing a change from methods they have successfully employed for many years. The contemporary urban dweller may not fully understand or appreciate the effort it takes to be a rancher or farmer, but agricultural diversity and sustainable agricultural enterprises in their many forms, is a functional reality of how we make a living and how we survive in the agricultural community.”