Editor's note: The Dia de Los Muertos drive-in concert on Oct. 31 has been cancelled, according to an event organizer. County health officials notified organizers that the concert was not permitted under COVID-19 health guidelines. New Times learned of the cancellation after this story went to press.

On Halloween night, cars will pack the La Cuesta Ranch in San Luis Obispo for the county's first "drive-in concert" during the COVID-19 era. Pitched as a celebration of Día de Los Muertos, the event promises live music streamed from the stage to car radios. Tickets sell for $100 per car.

Such a concert is an anomaly these days. Under California's current COVID-19 restrictions, nearly all live music, theater, and performances are on ice—pretty much indefinitely as the pandemic rages on.

But the Halloween show falls under a special exemption for cultural celebrations. Other live shows have also taken place throughout the county—but seemingly against the rules and without consequences, according to a recent letter penned by the Central Coast Coalition of Arts Leaders. 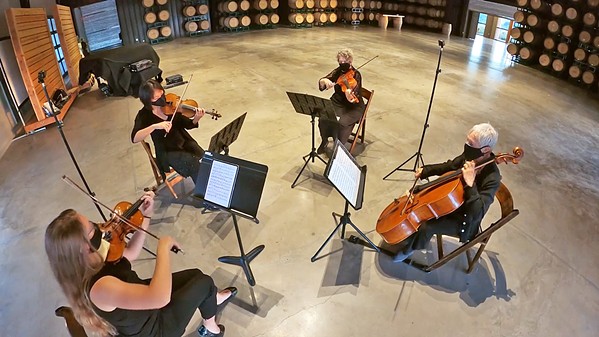 Meanwhile, performing arts groups, like the SLO Symphony, cannot get permission from health officials to do so much as film and record a private orchestral performance with no live audience, said symphony Executive Director Anna James Miller.

"We'd put together a really well laid-out, thoughtful plan on how to socially distance a reduced orchestra and safely record and create digital concerts," Miller told New Times. "We felt like it was an absolute foolproof plan that was going to work. Then we came to find out that that wouldn't be allowed.

"It seems to me," she continued, "that if you ask, you'll be told 'no.' But if you just go ahead and do it, you won't have a consequence. That's part of what I feel like we need to change. We need it to be a more level playing field."

Dozens of local art groups and venues expressed this frustration and others in an Oct. 14 letter addressed to county and state officials from the Central Coast Coalition of Arts Leaders. The basic message: Please do something to save the languishing performing arts industry.

Leaders said in the letter that their sector has been all but ignored in California's Blueprint for a Safer Economy. A lack of clarity and creativity in developing a path forward for the arts is crippling the industry and making future planning nearly impossible, they said.

According to the letter, which has nearly 40 co-signers representing organizations from the SLO Repertory Theatre to the Avila Beach Golf Resort, opaque COVID-19 guidelines are threatening the survival of the local arts scene and its $30 million in annual economic activity.

"Many of our Central Coast performing arts organizations and venues risk permanent closure if we do not receive economic relief in some form," their letter reads. "Our voices have been noticeably absent from the conversation. ... We are determined to make our voices heard until our industry receives the fair inclusion in reopening plans that other comparable businesses have been extended."

In asking for revisions to the state's COVID-19 framework, the letter points out that other industries have been provided paths to partially reopen, including movie theaters, museums, zoos, religious services, casinos, parks, and tattoo and body art studios.

"This should be extended to performing arts centers," the letter says.

The coalition calls for three specific changes to current COVID-19 guidelines. It asks that the performing arts be included in reopening plans alongside venues like casinos and movie theaters; that the rules for live music be standardized across restaurants, bars, wineries, and performance venues "so that all are treated equally and fairly"; and that outdoor and drive-in performances with limited audiences be permitted with safety precautions.

"The arts are a fundamental component of vibrant communities," the letter concludes. "We ask you to take immediate action on this important issue."

Across the letter's co-signers, specific needs and challenges vary by group. For Miller and the SLO Symphony, their immediate goal is to gain permission to film concerts without audiences—something Miller says is happening elsewhere in California but SLO County officials currently aren't allowing. SLO Symphony musicians have resorted to self-recording concerts in small groups, like a quartet, to enable community members to watch their performances from home or at a drive-in screening later.

"You can imagine that it's not the same [as a bigger orchestra]," Miller said. "A lot of our audience, especially for the symphony, is that at-risk demographic. We want to be able to provide music for them because it's such a hard time right now."

In response to New Times' questions about the coalition's letter, SLO County Public Health Officer Penny Borenstein said that her office looks at both the risk of transmission and state guidance "when working with individuals and organizations to determine whether an activity is allowable."

On pre-recorded performances, Borenstein suggested that the activity fell into a gray area in the state's rules. She promised that she'd "advocate alongside the arts community for the state to provide guidance in support of this type of activity."

"We concur that there are ways this could be done safely with appropriate precautions," Borenstein said. "We agree that the arts add to the vibrancy of our community and will certainly be important to our community's recovery."

While Borenstein offered her support, the arts community at large is still waiting on hard answers and timelines about their futures. Patty Thayer, communications and development director for the SLO Repertory Theatre, said that the popular theater group is working on plans to open an outdoor space where it can host small, socially distanced shows.

But right now, she has no firm idea of when they may get the green light to do that and what the guidelines or requirements would be.

"If we can come back outdoors, we'll be doing smaller plays with no big casts," Thayer said. "But the question is, where in this freight train that we're riding can we get on? It'd be good to know when we can give it a shot."

"The message is, if you want to have the symphony and Festival Mosaic and shows at the Performing Arts Center and shows at SLO Rep on the other side of this thing, we do need your help now," Thayer said. Δ