Before the written word, stories were passed from person to person through repetition, and being a storyteller was—and still is—an art form. Stories might be amended, revised, or changed from teller to teller. Likewise, before sheet music and recordings, music and song passed from performer to performer, morphing as they traveled through time and space, handed down like family heirlooms.

As a music fan, I’m fascinated by this process and by the people who make it their life’s work to capture and save these windows into our artistic history. Alan Lomax is probably the most famous folklorist and ethnomusicologist, whose thousands of songs and interviews for the Archive of American Folk Song reside in the Library of Congress. But there are still plenty of musicians who in their personal way archive and save traditional music, protecting it for future generations.

Los Osos resident and musician Stuart Mason can certainly count himself among those precious few who honor the old songs and seek to preserve them. On his second solo album Tradition, Mason sought out traditionals, songs for which the author is frequently unknown, and which are considered to be in the public domain, meaning they’re not copyrighted.

Sure, you could accuse him of being too cheap to pay royalties, but he sure didn’t skimp on this new recording, which is filled with sparse but beautifully crafted and arranged versions of classic folk, gospel, and roots blues songs.

“I dearly love the old songs,” Mason said in his press materials for the new album. “My sources for the album’s tunes range from North Carolina fiddler Joe Thompson to Missouri collector Max Hunter and Midwestern blues man Charlie Parr. I would consider most of these songs to be standards in the old-time music world. My goal was to capture my own arrangements of some of the great chestnuts that I’ve been singing for years.”

The liner notes are full of insights. Of “Jesus Met the Woman at the Well,” Mason writes, “Peter, Paul and Mary claimed authorship of this, but Mahalia Jackson recorded it before them in 1954. Her composer credit was to James W. Alexander, a member of the Pilgrim Travelers.”

Or of “Oil in My Vessel,” Mason explains, “The verse from ‘Amazing Grace’ was written by slave trader John Newton, who composed it upon safe landfall after his ship was battered by a violent storm off the coast of Donegal, Ireland.”

Mason’s “Going to Georgia” is based on the song also called “Troubled in Mind,” which was song No. 102 in Alan Lomax’s Folk Songs of North America, which has been recorded by the likes of Burl Ives, Doc Watson, and Jerry Garcia.

Some of these songs you might recognize, others perhaps not. What they have in common is their plaintive qualities, the deep resonance of their emotions, and the window into a world long since passed.

“The defining sound on this album is that of my fretless tackhead banjo,” he said. “I like its mellow tone and lower-pitched tuning. Longtime fans who are accustomed to hearing me play my old Martin axe and Gibson 1918 mandola will hear that, too. I use Tom Waitsian studio effects like telephoned vocals and stomping feet. On one track, I clacked a set of deer antlers to the beat—because it sounded good to me. I just try to listen to what the song calls for, rather than try to fit into any formula.” 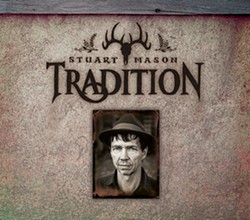 To my ear, the song that brings all Mason’s skills together is “Pretty Saro,” with great harmonica work and harmony vocals by Davidson, and sparse yet melodic guitar and bass orchestration.

On it, Mason sings, “When I first come to this country in 1849, I saw many fair maids but I could not see mine. I viewed it all around me, saw I was quite alone. And me a poor stranger here a long, long way from home. My true love she won’t have me. It’s this I understand. She wants some free holder and I have no land. I could not maintain her on silver and on gold. But all of the other fine things that my love’s house could hold, that my love’s house could hold. Farewell to my mother, and to my father too. I’m bound for wander this wide world all through. And when I get weary, I’ll sit right down and cry. And think of my little Saro, pretty Saro, my bride.”

Mason’s vocalization cadence is simply stunning here. His voice sounds like it's come down from the mountain, and when he and Amber Cross harmonize on tunes such as “Gospel Plow,” “Going to Georgia,” and “All the Good Times are Past and Gone,” it’s pure magic.

“I use the word ‘oldternative’ to describe what I do,” Mason said. “What if you went back to all that good old stuff and modernized it without the homogenizing influences of bluegrass and Nashville country? That’s what I’m exploring. To me, old is the new alternative.”

Mason’s new album feels like home: warm, inviting, filled with happiness, sadness, and all the feelings in between. These dark mountain ballads are haunting and beautiful and a reminder of those pioneers and pilgrims who cut out a place for themselves in a new country. The recording was funded by $7,000 Mason raised in a fan fundraising campaign, and the people who kicked in should take pride in this project. It’s an amazing achievement.

This week, Stuart Mason and his trio (John Weed and Ryan Davidson) will perform two album release shows: Friday, May 29, at 7 p.m. at a SLO House Concert ($l5 to $20 suggested donation at the door; info at slohouseconcerts@gmail.com); and Saturday, May 30 at 8 p.m. at Painted Sky Studios ($l5 donation at the door; call 927-8330 or email paintedskystudios@yahoo.com).

Good Medicine Presents started a new free concert series at Tooth and Nail Winery every Friday from 5 to 9 p.m., and this Friday, May 29, you can see The Mother Corn Shuckers. This good-time string band is a hoot, delivering irreverent songs like their New Times Music Awards winner “Reasonably Deranged.” And if you’re not a wine drinker, fear not. Great beer will also be available for purchase.

By the way, this Sunday, May 31, Tooth and Nail also plays host to Leftover Cuties from 1 to 4 p.m. “They are kind of badass,” claims Good Medicine’s Todd Newman. I watched a video of their version of Bob Dylan’s “Don’t Think Twice, It’s All Right,” and I have to concur. Lead singer Shirli McAllen has a bell-clear, arresting little-girl voice, and the string instrumentation is subtle but solid. Quirky and cool!

On Saturday, May 30, A-Town indie act Nothing Ever Stays plays a CD release party with Eager Seas (formerly known as Lakes) and The Vacant Shapes (7 p.m.; all ages; $10 presale or $12 at the door).

When our temporary Arts Editor and Flavor columnist Hayley Thomas says, “Jump!” I say “How high?” She writes, “Kreuzberg roaster Shawn Clark of Poncho & Lefty will be playing a solo show at Kreuzberg Lounge on Friday, May 29, at 8 p.m. The show is free. The lineup is Shawn Clark, who plays country and western, and barista Mitch Shira, indie singer songwriter. These two good coffee men will be putting down their beans and picking up guitars!”

Jethro Tull fans will have something to cheer about this Saturday, May 30, when John Wessel brings his Tull Tribute act My Sunday Feeling to the Fuel Dock at 9 p.m. After an opening act, Wessel (flute and vocals) will join with bassist Drew Cornick (original Tull bassist Glenn Cornick’s son), drummer Garrett Morris, and guitarist Brendan McGrath (who’s played shows with Tull guitarist Ian Anderson) to play 90 minutes of early Jethro Tull classics from the first four albums including Aqualung.

Also this Saturday, May 30, at Tap It Brewery, local band Aerie will play an EP release party with The Balloon Hoax and The Earthtones. The show starts at 5 p.m.

After being rescheduled twice, Ranchers for Peace will finally play a benefit concert for local nature-connection nonprofit Outside Now this Sunday, May 31, from 3 to 5 p.m. in Los Osos’ St. Benedict’s Church (suggested donation is $15). “Help us help them continue their great work in providing unique opportunities for awakening and deepening essential nature-connection awareness for children of all ages and their families too,” said Chas Duncan, one half of the politically progressive father-daughter duo. “This chapel is a beautiful space in which to spend an afternoon, and we’ll be recording the show for an upcoming live CD. Come join us, and add your rowdy applause to our upcoming release: It’ll be a cool thing to brag about to the grandchildren someday, around the electronic campfire on Mars-base Alpha.”

The Jack Roberts Harvey Band plays Frog and Peach this Sunday,  May 31, at 10 p.m., delivering an evening of blues, rock, roots, Southern rock, and country.