Paso Robles High School senior Danny Perez first heard about an incident involving a pride flag at his school about a month ago while he was sitting in social science teacher Geoffrey Land's class.

"Mr. Land just told us, straight up and flat out, that someone had taken a pride flag down from a teacher's classroom, went to the bathroom and defecated on it, and then posted it onto social media," Perez said. "Once he had said what had happened, I don't know what was said after that, or what discussion went on in that class, because I was in a state of shock. I wasn't scared, but it was one of those moments where you just feel uncomfortable in your own skin. ... Then after that, it was anger, knowing that no one was going to talk about this." 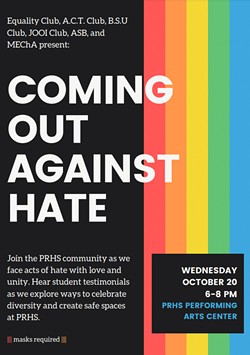 In reaction to what happened, Perez and some of his peers organized a "Coming Out Against Hate" forum. On Oct. 20, students planned to come together to share testimonials about dealing with anti-LGBTQ-plus incidents at Paso High. The forum was scheduled in the evening, after New Times went to press.

Land said he first heard about the details of the incident from fellow teachers and students, not from the district.

"It was word of mouth, and then it was just sort of silence," Land said. "I have several students who identify as LGBTQ, and they were troubled and then worried and then upset by the school's lack of obvious response. ... Staff and students didn't hear anything for almost two weeks."

When Paso Robles Unified School District Superintendent Curt Dubost eventually sent out a letter on Oct. 1, he announced a new school policy: no flags larger than 2 by 2 feet can be displayed in classrooms, and no flags that alter the American flag are allowed.

"That's when it really started feeling like there was a problem, not only with hate crimes on the campus, but with the misunderstanding of the administration about how LGBTQ students felt," Land said. "The biggest problem with the school's response was that it seemed to be crafted in consultation only with groups who are not in the classroom."

One of the groups the district consulted on its new policy is the Gala Pride and Diversity Center in San Luis Obispo. Gala met with district officials on Sept. 30.

"During that meeting, the school district mentioned this 2-by-2 [foot] rainbow flag idea they had," Gala Executive Director Michelle Call said. "Initially we didn't see the problem with that."

But after hearing outcry about the new policy, and learning that a standard classroom flag is 2 by 3 feet, Gala agreed with concerned students and teachers that the district's actions were "essentially a pride flag ban," Call said. In an Oct. 15 statement, the organization called on the district to remove the limitation and increase it to 2 by 3 feet.

Superintendent Curt Dubost told New Times that the district "deplores any acts of unkindness or violence or hurt toward anybody."

"I applaud the students for their reaction and putting together this student forum," he added.

Dubost said the new flag requirements are an attempt to "find that compromise where we can have rainbows but not have them be a distraction."

For some students, the district's reaction was a step backwards.

"The school has tried to politicize the pride flag and queer identities," Paso High senior Ava Hughes told New Times the night before the forum.

Hughes, who planned to speak at the Oct. 20 forum, said another recent anti-pride incident shows that the school has a long way to go to make queer students feel safe.

"Today we just got an email from our principal after school, that someone had defaced a pride flag mask, another hateful incident," she said. "Clearly [the district is] not doing enough physically, besides just saying we need to do better." Δ