The half-dozen residents of Cal Poly’s Crops House have voluntarily vacated the house and it has been boarded up in the wake of a campus outcry over racist signs and symbols seen at the building. 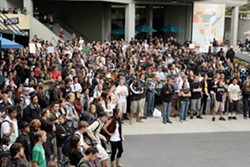 Cal Poly President Warren Baker, sharpening an earlier statement, announced the actions, as well as plans for a Nov. 12 community meeting, in a campus-wide announcement Oct. 7.

“Over my nearly 30 years as president of Cal Poly, I cannot think of another incident that has outraged and saddened me as much as the hateful and intolerant displays reported last week at the Crops House.”

Yet his announcement didn’t describe any further actions to be taken against the former residents. In fact, it emphasized that college officials believe no laws were broken, adding “however reprehensible, the hateful displays at the Crops House represent expression protected under the U.S. and California constitutions.”

Baker did announce plans for the College of Agriculture, Food and Environmental Sciences to review the supervision and oversight policies in the agriculture housing system.

His statement came in the days after students gathered for a Halloween protest in which marchers wearing matching black T-shirts spoke out against racist paraphernalia found on the university-subsidized house for agriculture students.

Many protesters had taped paper signs to their shirts that displayed the black silhouette of a fist in the air next to the words: “Will not stand for intolerance, injustice, inequality, invisibility.”

Some carried picket signs that bore slogans including “I like girls and black people,” and “Take a stand.”

They flooded the University Union Plaza the morning the story came out, but word had trickled down through several school clubs about the inflammatory words and symbols on the Crops House the night before. The protest was organized through a web of e-mails, Facebook postings, and text messages.

On Oct. 30, New Times published a story saying a university official had confirmed that a sign with a racial slur had been posted at the house during a party weeks earlier.

During a visit subsequent to the party, reporters witnessed and photographed a Confederate flag hanging from the balcony next to a hangman’s noose. Another Confederate flag was painted on a table.

“We’re basically just trying to get the administration to do something about this before someone is killed or something really furious happens,” Allison Marin, one of the protesters, said.

Residents of the Crops House issued a written apology, but the campus newspaper Mustang Daily quoted four unnamed house members as denying that a racist sign was ever posted and arguing that they did not know who posted the flag and noose.

At the Halloween rally, many students doubted the administration’s ability to crack down on the Crops House residents. Several protesters urged their fellow students to self-police in order to prevent further intolerance on the campus.

“We are not the minority; they are the minority,” Peter Wade, chapter president of the Society of Black Engineers and Scientists, told the crowd.

Cal Poly has long faced diversity challenges. In 2004, it had the lowest rates of black, Latino, and Native American student populations of any California State University schools.

The deteriorating house had been scheduled for demolition in 2009, school officials said.