Students will be learning from home this fall, but some Central Coast teachers will have to be on campus 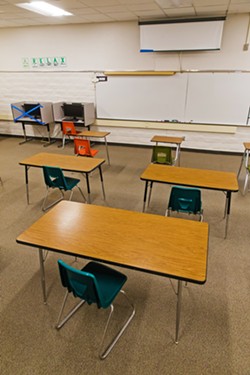 Jennifer Dolan has been teaching English at Righetti High School in Santa Maria for more than two decades, and, like anyone, she has good and bad days. But for Dolan, the bad days are worse than most.

About 15 years ago, Dolan was diagnosed with fibromyalgia, a disorder that causes chronic muscular pain and can make it difficult to sleep and concentrate. In the spring of 2018, she requested an accommodation that would allow her to teach her classes in the morning and leave campus during her prep periods in the afternoons if not feeling well.

The Santa Maria Joint Union High School District was more than willing to help, but she was required to go through the interactive accommodation process, during which she filled out an application, met with her employers to discuss her disorder, and handed over various medical records. It was a somewhat invasive and time-consuming procedure, and, although Dolan said there were some unusual circumstances in her case, it took more than three months for her request to get accepted.

So when Dolan heard that all teachers in her school district would be required to teach from their on-campus classrooms this fall, unless they go through the interactive accommodation process, she was concerned.

"The problem is that the process is kind of unwieldy," Dolan told New Times. "It takes a lot of time."

And there's not much of that left before school in Santa Maria starts on Aug. 17.

As the COVID-19 pandemic trudges on, students statewide will by and large be attending school from home this fall. But several school districts on the Central Coast are hoping to get teachers out of their homes and into their classrooms regardless. From Paso Robles to Santa Maria and Orcutt, local school districts are requiring instructors report to their school sites to teach from their classrooms for at least a portion of each week, an attempt, administrators say, to bring some feeling of continuity and normalcy to the school year for students and their families.

But that brings up multiple issues for all kinds of teachers—those with health issues that put them at greater risk for severe illness or death due to COVID-19, those with young children of their own stuck at home, those living with vulnerable individuals, and so on.

In the Santa Maria Joint Union High School District, teachers will be required to report to their school sites each week. Teachers with school-aged children will be allowed to bring their kids onto campus, and those who aren't comfortable or able to come in can apply to stay home through the already existing interactive accommodation process.

Dolan plans to go to her classroom as required by the district. Her youngest child is 15 years old and she's not too worried about catching coronavirus while alone in her classroom. But her husband, who also teaches in Santa Maria and has respiratory issues, needs to stay home. (Dolan said she plans to stay isolated in her classroom on campus and distanced from her husband as much as possible at home.) The accommodation process will be expedited, but she wonders how many teachers will apply and how many of them will actually get accepted before school starts.

To expect the district to get through all those requests in just a few days, she said, "That's insane."

Like in Santa Maria, the Paso Robles Joint Unified School District will require its instructors—exceptions will be considered by human resources on a case-by-case basis—to teach from their classrooms this fall. That, according to Paso Superintendent Curt Dubost, will allow teachers to use all the resources available in their schools, including supplies, technology, and support staff. Issues with technology, students, parents, and staff can be handled more efficiently when everyone is on campus.

Of course, challenges lie ahead. Paso's current bandwidth technology can't handle having so many teachers online all once, and, on July 23, the Paso board of trustees approved about $121,000 worth of upgrades to the district's bandwidth, firewall, and internet connection technology.

But with so many districts in the same spot, Dubost said there's a shortage of necessary supplies and a backup in implementation services. Paso won't get its tech supplies until the end of this month, Dubost said, and it should be installed by the middle of next month, long after the first day of school on Aug. 20.

So teachers will have to come in on a staggered schedule for the first few weeks of school, with some working on campus at the beginning of the week and the rest coming to campus the latter half of the week.

Still, Dubost said he hopes having teachers in their classrooms this semester will give parents and students some peace of mind.

"The main thing is to make it as normal as possible," Dubost told New Times.

According to an Aug. 5 survey conducted by the Paso Robles Public Educators union, most teachers in Paso appear to be on board with the decision.

About 72 percent of all teachers surveyed said they'd be willing to meet in-person with colleagues in small groups—on the condition that appropriate safety measures are in place—and 64 percent said they'd meet one-on-one with students and parents.

Still, the plan has its problems, according to James Lynett, executive director of the Paso Robles Public Educators union.

While individual classrooms are secluded, Lynett said the bathrooms, workspaces, and hallways are shared. And although district officials claim they want teachers to be able to use the resources available on campus, Paso's current bandwidth technology is too weak. The staggered schedule will be fine for high school teachers, Lynett said, but it could be problematic for elementary teachers who will have to lug loads of supplies back and forth from their houses to classrooms.

While Lynett agrees that seeing teachers livestreaming from their classrooms will provide some feeling of regularity and comfort to students and their parents, he's not convinced that's the only reason district officials pushed for this.

"To be brutally honest," he said, "I would say they have gotten some complaints from the community."

"That spring experience was kind of like an emergency," he said, adding that teachers and administrators had essentially a single weekend in mid-March to transition entirely from in-person to online education. "There was no real way for that to go smoothly." Δ