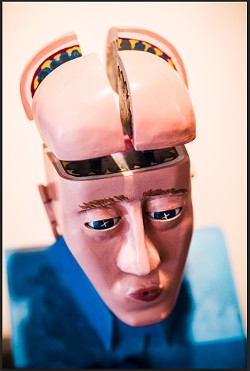 In a white room in Paso Robles, you can make a man’s head unhinge by the slight turn of a lever. If that seems too much, just a few steps over, you can make a man’s eyebrows wiggle. And if all this manhandling feels a little bizarre, there’s always the dune knight and glossy, wall-mounted shark nearby to keep you company. I know what you’re thinking. No, this is not the eccentric torture chamber of some whimsical, Buffalo Bill type. These are the kinetic sculptures and mixed media paintings of Rick Davis and Burl Vreeland, now on display as part of Studios on the Park’s latest exhibit, Cranked Up.

Davis, a Southern California resident with a background in industrial engineering, has been making his unique brand of “crankers” (a kind of mechanical cartoon) since 2006. “There’s nothing magical,” Davis insisted over the phone. “I hear things, talk to people, and something someone will say will trigger something.” It’s a personal and pragmatic touch that can be seen in the details of Davis’ work. Each sculpture has is its own lever, and when you turn it, a woodpecker may jab or a river may ripple. In the vein of old, carnival puppets that come to life with the aid of a quarter, Davis’ pieces highlight the weirdnesses and peculiarities of movement with supreme, surreal finesse.

One sculpture, Sisiphus (sic), exemplifies this charged blend of offbeat humor and technical skill. As the Greek legend foretells, the once-king Sisyphus was damned to roll a rock up a hill, only to see it fall, and push it up again ad infinitum. Davis’ version, rendered out of fiberboard and cast in pastel colors, has the doomed character push the boulder up, only to have it fall back on a spring and bounce right back up, jack-in-the-box style. In another of Davis’ curious pieces, a sharply dressed woman in dark sunglasses ever so gently brushes the dress strap off her shoulder. It’s subtle, but mesmerizing for the most fleeting of moments.

“The tells that people have and little things that people do mean a lot,” Davis explained. “They wink their eye or twitch their nose and it will strike a note with me. It’s just fun. If I can engage the viewer for just seconds … if you’re entertained, then you’ll remember one of these pieces.”

Burl Vreeland takes the same easygoing approach to his art. He comes from a creative family in SLO County and has been meticulously layering, re-calibrating, and layering again new elements on the pieces in this show for the past two years. Like with Davis’ sculptures, there is an industrial and retro feel to the work. Most of Vreeland’s “paintings” are really textured collages of various materials—wood, canvas, spray paint, acrylics, and oils—that span, in subject, from the poolside to the dark side of the moon.

“I try to use everyday things,” Vreeland commented. “It’s whatever I find aesthetically pleasing, so all you need is that one idea, that one subject. You take all those things that have been there a month, layered upon each other, that’s the story. You wanna make something where someone goes, ‘How do you do that?’ And I do think it should look good in a house.”

It’s this kind of tranquil and bohemian attitude that infuses most of Vreeland’s work. In Technicolor hues and mod patterns, he produces the interior décor of John Waters’ dreams—neon spacemen, abstract suburban landscapes, and a Fantasy Motel fashioned in Crayola-like vibrancy. It’s pop art, in a way, with nods to Chris Johanson’s rainbow palette and David Hockney’s placid landscapes. “Rembrandt, Picasso—throw them in there, too,” Vreeland jokingly added. No matter the influence, though, his work remains distinct in its precise craftsmanship and kaleidoscope flair.

Studios on the Park already has a funky appeal. When you waltz in, there’s half a car and in each corner you can witness traditional oil landscapes, Western kitsch, and a painting of a pizza (Trade artist Neal Breton one cheesy piece and the painting is yours!). With Cranked Up, Rick Davis and Burl Vreeland have transformed the studio into an interactive, bizarre, and joyous funhouse.

You can challenge Jessica Peña to a duel with a dune knight at jpena@newtimesslo.com.