Studios on the Park displays Untitled, a group exhibit of abstract forms from three artists

On the walls of Studios on the Park in Paso Robles, right behind the glimmering holiday window display, you’ll find some of the greatest artistic luminaries of the 20th century. To the left, there’s Henri Matisse, and not 20 feet farther down, you’ll see modern art masters Pablo Picasso and Cy Twombly. Mind you, these aren’t the works of Matisse or Picasso you’re looking at. These are the dark, pensive portraits by Tom Peck that can be seen alongside the works of Allen and Braeden Cox as part of their new exhibit, Untitled.

“This series, I decided I was going to do people,” Peck told New Times over the phone. “What I like to do, is I’m a proponent of not what you paint, but how you paint it. So, I tried to abstract the person, yet within that, there’s a humanity. Even though it may be very loose, very aggressive, and very abstract, the fundamentals are anatomically correct. There’s a tone and a mood.”

For nearly 50 years, Peck’s been working out the tones and moods of people. His anthropomorphic sculptures have been featured at Studios for some time. Made out of clay, they don’t immediately scream out, “Hey, I’m a person!” They’re more primitive than that. Peck’s sculptures only suggest a hint of humanity and personality with a certain fold of the arms, a casual gesture, or some prevalent penile flair. The same goes for his paintings (penile flair included).

In somber shades of blue, gray, and black, Peck paints the most minimal features of his more familiar portrait subjects. For someone like Jack Kerouac, that means muted tones, rough brushstrokes, and only the vaguest physical and emotional characteristics—a thick, turned-down eyebrow and sullen eyes—to convey who the subject is. It seems, like Peck’s sculptures, primitive, but there’s more at play here. Something darker, something fascinating that walks the line between what is recognizably human and what appears feral and almost otherworldly. 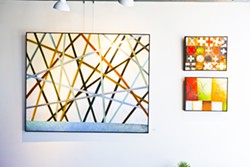 Take the example of Honey Boo Boo’s mother—Mama June. Peck portrays her the way Francis Bacon did Pope Innocent X. She’s cast in ghastly white that dribbles down the surface of the canvas to wicked effect. Her eyes are dark and blank, with a frightening expression. Coupled with the newsprint that Peck layers into the background, the painting certainly puts the “boo” in Honey Boo Boo.

“For the Honey Boo Boo painting,” Peck noted, “what I’m communicating and what I wanted was a) to know it’s her and b) to have it feel graphically complete. There’s not too much, no messages per se. I want it to be interesting. … I just really liked her shape. For the woman in the chair [another of Peck’s paintings], I started and was interested in the shape of it. … There’s humanity in that shape. It’s a very simple, strong big graphic shape, with minimal information, but there’s a human emotion in there. There’s a person there, and I like that dichotomy.”

Allen Cox and Braeden Cox, his daughter, have a similar affinity for shapes and abstraction.

Allen Cox, a resident of Paso Robles like Peck and former archaeologist, doesn’t focus so much on people, but his work also hinges on the tension between what he describes in his artist’s statement as “the possibility of subjective reading and a work’s primary existence as an abstract presence.”

With vivid lines, circles, and color blocks, Cox blends oils and wax for puzzle-like pieces that disorient the eye as well as appease it. He paints in rich hues of mahogany, red, goldenrod, green, and blue. It’s a far less melancholy palette than Peck’s, or even that of his daughter Braeden, whose work takes abstraction into the German expressionist realm of bleak, charcoal torrents.

Like her father and like Peck, her work explores shape and color with an undercurrent of darkness. Next to their works, you can almost see a progression. Where Peck begins with recognizable human figures, Allen continues with shapes that exude color and personality, and Braeden completes with dark, deconstructed chaos.