There’s a whole crowd of people at Studios on the Park right now. There are the usual throngs of people visiting the art gallery, of course, people painting in the studios, and the occasional people popping into the space for a taste of its refreshing air conditioning. But there’s a whole other set of strangers lingering on the walls. There, they climb through refrigerators, wield magic, and remind us of family. These are the people and the images that make up Studios’ latest show, In a New World, which features the work of figurative artists Michael Pearce, Huïcho Lé, and Harold Muliadi. 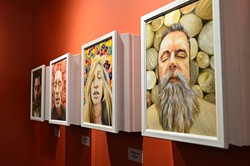 Pearce, a professor at California Lutheran University in Thousand Oaks, has been living in California for about 25 years. A transplant from England, he started painting and drawing as a distraction from the bitter doldrums of boarding school life as a kid.

“I was a terrible student at school,” he told New Times over the phone. “I was bored basically with the classes, found it rather tedious and wanted to escape as much as possible. Art was my escape.”

In the beginning, that art was fairly basic—still lifes, portraits, and an intriguing piece that involved the dissection of a cat image. As time went on, he became more and more disillusioned with the contemporary trend of abstract, deconstructive art.

“The trouble in the late 20th century is that the academy really threw out traditional, skill-based learning,” he explained. “When I was learning to paint in the ’80s and late ’70s, I found that completely tedious and completely boring. I thought art was dead.” 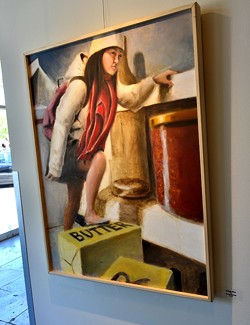 So Pearce went in the opposite direction. He began painting allegorical studies in the style of medieval masters and Renaissance realists like Caravaggio. His works are impressive feats, not only in their meticulous technique, but also in their overall grandeur. Mythical women, dancing skeletons, and surreal characters loom large in gilded frames, sometimes adorned with poetic quotes. They are a beguiling mix of old-school technique and fresh narrative possibility.

“I want people to look at paintings and take something away from them,” Pearce said. “I want them to create their own story.”

Harold Muliadi and Huïcho Lé share that same, strong sense of story. Both of them are former students of Pearce, and since their graduation have continued to explore the techniques taught to them at Cal Lutheran.

“Michael did emphasize pretty strongly both the importance of coming up with original or creative concepts and technique,” Muliadi said over the phone.

For Muliadi, knowing how to do something—paint a hand, a reflection, or the inside of a fridge—is one of the central motivations behind his oil-based paintings.

As a kid, he had an intense fascination with the technical detail and anything-goes imagination inherent in animation. It was only in college, however, that he finally learned the tried-and-true artistic skills necessary to realize his creative visions. 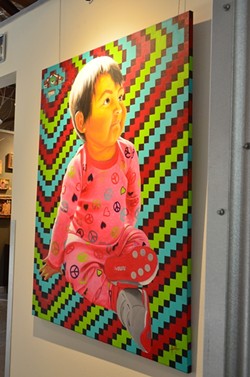 “Just going to college, it sort of struck me,” he commented. “This is the sort of point where we are in culture and society. There aren’t that many transitions, really strong transitions, between childhood and adulthood. There’s this idea that adults lose this childlike imagination, but I don’t think that’s true.”

Muliadi’s paintings explore this place of childlike whimsy. In bold colors and soft, almost impressionistic strokes, he paints the scenes we may have dreamed up in crayon as kids—scenes of a young girl playing as a giant by picking up cars on the 405 freeway, or of another young girl riding a turtle in search of a new adventure.

Like Muliadi and Pearce, Lé’s paintings also bring classical technique to fantastical subjects. He’s a native Californian, but he belongs to a community of Oaxacan descendants who live in Ventura County. Pieces like El futuro está en buenas manos reflect this cultural mix. In the forefront, Lé paints a baby girl, clad in the contemporary garb of any American toddler (i.e. pink pajamas, Puma sneakers). But behind her, Lé has juxtaposed the old and the new with a traditional, Mixtec pattern.

Though seemingly disparate in style and subject matter, all three of these artists manage to bridge different times, traditions, and cultures with one, central link: people.

“They’re us,” Pearce said. “The figure becomes everybody. It’s the figure that can stand in for all of us.”

Arts Editor Jessica Peña fell into a block of Swiss cheese while exploring her fridge. Send her aid and some complimentary wine at jpena@newtimesslo.com.