Sweet & Sour runs through Feb. 28 at Studios on the Park at 1130 Pine St. in Paso Robles, which is open to the public Sunday through Thursday from noon to 4 p.m. and Friday and Saturday from noon to 9 p.m. You can also see the work online at studiosonthepark.org/events/sweet-sour.

Sugar and vinegar don't seem like they'd go together, but obviously the Chinese were on to something when sweet and sour dishes first appeared during the Tang dynasty. That juxtaposition seems to hit our taste buds just right, and what it means to the 26 artists who turned in pieces to Studios on the Park's new exhibition, Sweet & Sour, was a matter of interpretation.

"We were very excited to see the different takes on Sweet & Sour, since we left it so broad," Studios Executive Director Sarah Ambrose explained. "We weren't sure if we'd get a lot of food, sweets, or contrasting colors. The options were endless! Some pieces are more obvious than others, but if you look into it a bit more, you can see the artist's point of view."

In Hellie Blythe's One Lump, or Two?, a ponderous mess of hair frames a scrunched-up face.

"That sourpuss contemplating her choice of sweet sugar lump or sour lemon slice was a natural fit for the Studios' show," Blythe said. "She was leaning against my studio wall, freshly painted, with an expression that begged to be questioned. She was a natural for the show once her embellishments were added. I expect her choice of beverage was tea."

Blythe also "briefly contemplated creating a man with a large tongue, mapping where our sweet and our sour receptors reside," but she abandoned the idea "when time ran out. Like lightning striking the idea warehouse, sometimes they start a fire inside and sometimes they don't. Probably because the ideas are either all wet or severely dry." 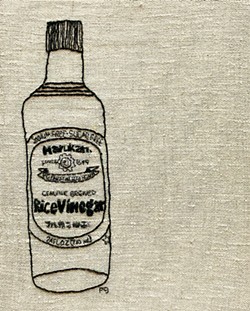 "When I read the call for art for Sweet & Sour, the first thing I thought of was sweet and sour chicken. I immediately wanted some," Grady quipped. "So, as is typical, I fell down the Google rabbit hole looking at recipes. The most promising one, with the most mouthwatering pictures, said that rice vinegar was essential and warned against even thinking of substituting any other kind of vinegar or the sauce would be a culinary disaster. There was the inspiration ... the secret essential ingredient to the perfect sweet and sour sauce ... rice vinegar."

Her carefully stitched image was drawn from a still life setup: "I draw with thread, so I got the vinegar bottle out of the refrigerator and got to work. A little pop art, a little embroidery, a lot of 'why did I choose something with so much lettering?' and the piece was finally finished," she said.

"I still haven't tried out the recipe."

John Martin's colorful How Many Sour Patch Kids Does It Take? animates the popular kid-shaped candy as they work together to consume a Tootsie Pop.

"I generally describe what I do artistically as 'real-ish,' but it's always representational," Martin said. "I paint so very slowly that mainly my goal is to choose a tableau that interests me enough to stare at for hours while slapping them on the canvas."

Of How Many, he noted, "I didn't initially intend for it to be an ominous scene, but if you try to make the inanimate lively, they're likely to act in unpredictable ways."

Fused glass artist Richard Mortensen admitted he's never sure where his ideas come from, but for Sweet and Sour Palette, he "suspects" it "has to do with my wife being a painter and her palette always being a mess of colors. I used pressure during the fusing process to try and 'smear' them together, so the piece looked more blended like a painter's palette. I think many colors lend themselves nicely to being thought of as either sweet or sour."

Self-described "animal artist" Susan Schafer spent her pre-artist career working in zoology, "including 17 years at the San Diego Zoo," she said. "When I think of what to paint, images begin whirling in my head for days, weeks, or even months before I even pick up a brush. Sometimes I can't even explain why a particular image ends up settling the way it does. I just know I have to get it down.

For her oil painting Who Put This On Me?, she explained, "I like just doing portraits of animals, but sometimes I like to put a twist on it, often incorporating a visual commentary on how humans interact with animals, for better or worse.

"With the cat, I wanted to portray that beautiful orange marmalade color, which interestingly occurs most often in males due to what is called a sex-linked trait. So, my cat had to be a male," she said. "I wanted him to be sweet, but then I thought about how some people like to dress their animals, whether the animals like it or not, and so I put a bow tie on him and gave him a bit of a sour look."

Schafer loves animals so much that she donates 40 percent of all her art earnings to "local and international animal charities."

This exhibition was Studios' first call to artists since the pandemic began.

"The public has thought the show has been fun," Ambrose said. "Of course, with COVID striking again, our numbers are down a bit in attendance, but that hasn't stopped people from coming in. As of right now, we've had three pieces sell from the show with another month left to go!" Δ