Photo Courtesy Of Sasha Irving ALL AGES A young gallery-goer is lifted up to observe California Impressionist master Maurice Logan's Redwood Empire, which is displayed next to contemporary painter Jeff Yeomans' Searching for Maurice Logan.

California Impressionists: The Masters & The Greats They Inspire runs until Nov. 17 at Studios on the Park in Paso Robles. Scot Levitt, vice president and director of fine arts at Bonhams—one of the oldest fine-art auction houses—will give a lecture titled Collecting California on Oct. 24 from 6 to 9 p.m. at the gallery. The event will be an "intimate talk about this landmark exhibition," in which Levitt will share "the history and strategies of collecting California paintings," according to Studios. Other upcoming exhibit-related events include Art After Dark Paso on Nov. 2 from 6 to 9 p.m. For more information, visit studiosonthepark.org.

Forty contemporary painters. Forty master paintings inspired by them. These 80 works are free to the public for viewing at Studios on the Park until Nov. 17. The exhibition—California Impressionists: The Masters & The Greats They Inspire—is described as a landmark in the Paso Robles gallery's 10-year history.

"It is the most exceptional, exclusive, and exquisite exhibition we have ever had," Janet Wallace, president of the Studios on the Park board of directors, told New Times during the exhibit's opening night on Oct. 3.

Before enjoying an evening of wine, light eats, and art appreciation, the gallery opening began with a primer on what distinguishes California Impressionism from other art movements. Studios brought in Jean Stern, the senior curator of California Impressionism at UC Irvine, to give a lecture—which was equally humorous and educational—on the particularities of impressionistic art that comes out of the Golden State.

"Because everything sounds better in French!" Stern said, to the audience's amusement.

Rather than painting in a traditional studio, a group of "absolutely dedicated outdoor painters" in France decided to ditch the suffocating setting and look at their inspiration direct from the source, Stern explained. That group, formed in the 1860s, included the now revered Claude Monet. Though initially perceived as laughable and childlike by the fine art community, impressionism quickly became the most popular art movement in France. The rugged coastlines of California were the next destination for this bright painting style that focuses on contrast and light.

One of the first and most famous California Impressionists, Stern said, was Granville Redmond (1871-1935). One of his masterpieces, Resounding Surf, is on display in the exhibition at Studios on the Park.

"You are very fortunate here to have access to the collection of the older works. Some of those should be in museums," Stern told New Times of pieces like Redmond's. "Especially since it's a private collection, you normally have to be invited to dinner to see the paintings. I urge people to not only see the old paintings, but to see what the living artists did that was inspired by those paintings."

One of those living artists who Stern praised is Lori Putnam. Based in Tennessee, Putnam had flown in that morning to be among her peers for the exhibition opening night. Her painting, Harmony Headlands, was inspired by Edgar Payne's Dana Point. While Putnam's work was painted en plein air just north of San Luis Obispo and Payne's was inspired by the Orange County spot, the remarkable similarity of the scenes depicted in each work is a testament to why California Impressionism is so distinct. The coastline, the foliage, and the golden mountains all signify the same state, whether it's here in SLO County or down in Southern California. 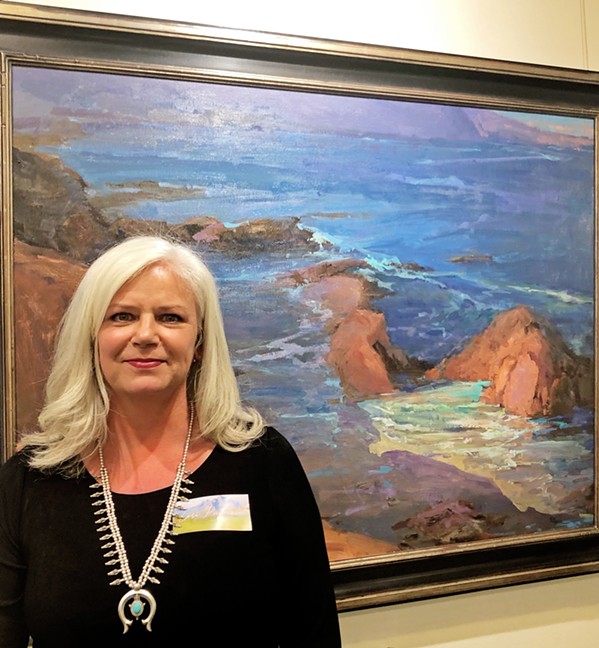 Putnam emphasized the importance of spontaneity in her painting process.

"Generally I am drawn to the light, in particular for this piece because of the pattern of the light and of the waves and of the rocks," she said of her large, elegantly framed Harmony Headlands landscape.

"But when I'm going out en plein air, I don't go out looking for that," she continued. "If I went out and said, 'I'm going to go find a pattern of waves today,' I would never find them. It grabs me and then I just have to stop, no matter what it is, and paint it."

In addition to the 80-piece exhibition, Studios on the Park is hosting a couple of associated events to provide viewers context and background on California Impressionism. One speaker event features fine-art auctioneer Scot Levitt, the vice president and director of fine arts at Bonhams, one of the world's oldest and largest auction houses of fine art and antiques.

For Levitt, art education is essential to not only appreciating an art gallery or museum, but of artistic financial success.

"The market for these paintings has grown over the years, but it doesn't happen magically," Levitt told New Times. "From Vincent van Gogh all the way down, it's all about how many shows, how many exhibitions, how many reviews, how many writers can write about these [paintings] to get that many more people to know about them. ... For me, education is key." Δ