The I Love Rock 'N' Roll exhibit, which features work by and inspired by musicians, is on display at Studios on the Park in Paso Robles through Sept. 1. Visit studiosonthepark.org for more information.

Almost everything is better off with a good, solid soundtrack, whether it's the morning commute to work or the latest superhero movie.

Curator and artist Celeste Hope wanted to bring the power of music to visual art, in more ways than one with the I Love Rock 'N' Roll exhibit. The collection of works, which features art by or about musicians, is currently on display at Studios on the Park in Paso Robles.

For this show, Hope recommends tracks like "Rocket Man," by Elton John or "We Are The Champions," by Queen.

"They're such anthems and represent a fun summer vibe as well," Hope said.

Hope, who used to be a full-time concert photographer in Austin, Texas, before she relocated to the Central Coast with her husband (owner of Hope Family Wines), featured her own music photography last year in another rock 'n' roll-themed show. The concept was so popular that Hope decided to bring it back again, but she opted this time to focus on the role of curator so she could display the works of other artists.

"Just bringing that rock culture to Paso is different than the other shows at Studios each month," Hope said.

Los Angeles-based artist Hayato Takano's piece, Freddy Mercury, named for the famous lead singer of Queen, is depicted through mimicking the look of sheet music by cutting out the lyrics of songs.

A vibrant watercolor and ink piece, The Way Is Out, featuring a bright abstract mass of orange and two human legs, is the work of Incubus lead singer Brandon Boyd. And an intimate black and white portrait of Mick Jagger is the work of photographer Alec Byrne, who spent much of his career photographing The Rolling Stones in their early days.

Hope said the show is one that should appeal to multiple generations who can connect with the music and musicians behind the art. 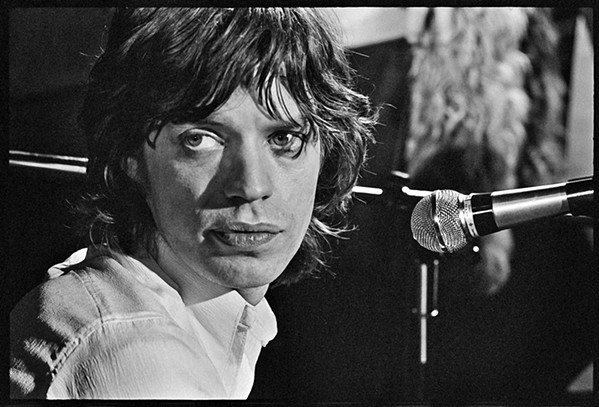 "It's a nice mix of different mediums," Hope said of the show. "It's kind of a nostalgic thing because there are a lot of musicians on display who have passed. It's just fun and nostalgic seeing people they're fans of." Δ

Arts Writer Ryah Cooley is rocking out in her living room, where her pit bulls have front row seats to the show. Contact her at rcooley@newtimesslo.com.