Check out Studios on the Park in person at 1130 Pine St. in Paso Robles from noon to 4 p.m. on Mondays, Wednesdays, Thursdays, and Sundays and noon to 9 p.m. on Fridays and Saturdays. You can also visit the Counter Narratives exhibit online at studiosonthepark.org/for-art-lovers, and find it under the "Exhibitions" tab. It runs through Sept. 28.

These cultural aspects of Chicano life are missing from the mainstream picture of what Mexican-American art is, according to Henry A.J. Ramos, Studios on the Park's artistic director and chief curator. 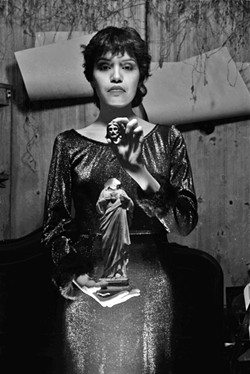 Studios' September show aims to challenge those stereotypes, to show people a side of the Mexican-American experience that is often overlooked, Ramos said. Coinciding with the 50-year anniversary of the Chicano Moratorium in East Los Angeles, Counter Narrative: An Examination of Recently Discovered Chicano Photography from 1980-Present focuses on 30 works from three East Los Angeles natives—Sean Carrillo, Marisela Norte, and Daniel Villareal—who captured Chicano community life.

Carillo, now based in New York, is a former member of the alternative arts group Asco-B, founded by Chicano arts figures of the 1960s and 1970s. Norte is the author of Peeping Tom Tom Girl, a collection of poetry and prose. Villareal is an LA-based photographer and actor whose photo collection is part of UCSB's California Ethnic and Multicultural Archives.

The show is rooted in a sense of self-identity and culture, Ramos said.

"Our hope is that people will understand, you don't have to be Chicano, Latino, or Mexican-American to see the show and understand it," Ramos said. "It's a universal message of humanity and struggle and humor and all of the things that, you know, make us alive."

The term Chicano, in and of itself, is a vague statement of protest, Ramos said.

"It was developed by young working-class Mexican-Americans and kind of a first generation of college-goers," he said. "At the time, not unlike now, there was kind of a lot of unrest."

In 1968, thousands of students walked out of East Los Angeles schools, protesting overcrowding, run-down schools, and corporal punishment. Mexican-American youth, Ramos said, had poor school funding, they weren't tracked into college prep classes, and the curriculum basically set them up for working-class careers. On top of that, Ramos said, there was a lot of police brutality and targeting of Latino youth. 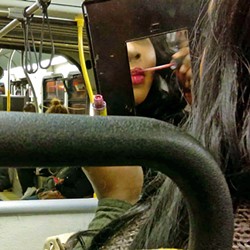 In 1970, almost 30,000 protesters hit the streets, marching through East Los Angeles as part of the National Chicano Moratorium Against the Vietnam War, but it was about more than that. Underlying it was resentment about unequal education, police brutality, and racism. Ramos said Latinos were often blocked out of weighing in politically—divided into voting districts where they had no power. And Chicanos wanted to change that.

"There was really a new understanding of the desire and the right of brown people to have the same opportunities that upper-class white citizens had," Ramos said. "Although the show doesn't deal directly with those issues, it does deal with the culture."

Counter Narratives isn't so much about political unrest, as it is about what evolved from it. Chicano culture is about more than protest, Ramos said. It's a dichotomy and an identity between the roots that Mexican-Americans share in Mexico and as residents of the United States, especially as Southern Californians.

The art that the Chicano Civil Rights movement spawned included the Asco art collective, which was active from 1972 to 1987, and rooted in political protest, and Asco-B, which came after. But that artistic and cultural identity also includes crossover/fusion music from bands like Los Lobos as well as a big punk scene including bands like The Brat.

The show emphasizes performance artists of the last four decades, including The Brat, Chola con Cello, and Boca de Sandia, fashion and makeup, as well as street life.

"Even though the photography and the music is at the core of this, I think that people will be very impressed with the performance art that extends beyond music and especially fashion that is somewhat iconic and lasting," Ramos said. "It might surprise people. You know, how much advance and progressive they were in their point of view." Δ

Camillia Lanham is ready to get some culture. Send future arts ideas to Glen Starkey at gstarkey@newtimesslo.com.