by Michael Tisserand And Staff Of The Gambit Weekly

I left it behind me on Saturday, with my two kids in the backseat, the soundtrack to "Shrek" on the CD player. My wife, a pediatrician, was on call for the weekend and stayed behind.

She joined us in a town just outside Lafayette, La., Sunday evening after a harrowing odyssey along the southern route of Highway 90, driving without her glasses or a cell phone, our three cats roaming in the back of a shaky Volvo.

Together that night, we watched the same show that all who'd gotten out were watching. The straight line for our city. The familiar "Cat-4" and "Cat-5." And for those of us who thought we'd seen this before, the much-hoped-for right turn.

It didn't matter. It hit. Even those who could read the tea leaves in John McPhee's "Forces of Nature" or John Barry's "Rising Tide," or who had seen the diagrams of a bowl-shaped city, are in disbelief. New Orleans is gone, along with the newspaper where I work, the home where I live, my kids' beloved school, my neighborhood sno-ball stand, my neighborhood anything.

On The Times-Picayune's web site and on cable news, I see my former home's dark and distorted reflection: submerged rooftops; a battered Superdome filled with the desperate; looters grabbing guns and VCRs and racks of shirts; a house scrawled in red with "diabetic inside"; the breach in the levee.

The future is recited: a bowl of toxic stew. The gas, the sewage, the dead. 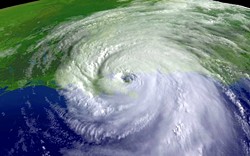 #On the local news shows in south Louisiana, the crawl beneath the picture lists statewide evacuation centers in Rayne and Opelousas, and announces that "Evacuees in need of dialysis should call ... " Above these details are shots of aerial superheroes in short red jumpsuits or head-to-toe military green, alighting on rooftops and loading old women and little boys in wire baskets for their ride out.

Scan along the Mississippi Gulf Coast, and it's tragedy and timber. A man holds his two boys. "I can't find my wife," he tells the reporter. "Our house split in two."

This is all via TV. Direct information is harder to come by. Cell phones aren't working; contact with others is haphazard. I haven't been able to talk with my publisher yet. But this morning, my wife reached her boss. This is a man who embodies the New Orleans peculiarly dark joie de vivre to such an extent that he dressed as the tsunami for this year's Mardi Gras.

On the phone, he was blunt. "I don't know if we're going to have a practice to come back to," he said. "What families will return to the city with their children?"

Other cities are mightier. Los Angeles, Chicago, New York. But New Orleans is where I wanted to make my home.

I first hitchhiked to the city as a college dropout who wanted to hear jazz and see Mardi Gras. The ride I got was with a preacher who warned me about sin and temptation. Just like every drunk tourist on Bourbon Street, that's exactly what I was looking for.

Soon after, I heard zydeco and followed the blast of brass bands on the streets, and started writing about musicians who seemed like magicians, the way they could conjure a mood. I even covered Hurricane Andrew, drove straight toward it, fueled by recklessness and a USA Today day rate.

For the past 20 years, I have moved in and out of New Orleans. This last time, the roots buried deep: job, house, family, school. Early notions of the city of good times were tempered by the closer looks at poverty, illiteracy, and crime I obtained as editor of the city's alternative weekly. Being a parent in the public school system brought me even closer. Long before the rain started, New Orleans was a troubled city.

But it's still the hallowed ground of Jelly Roll Morton and Louis Armstrong, of Mardi Gras and jazz funerals that send off the dead with "Didn't He Ramble?" Of lesser-known purveyors of high spirits in bleak houses. I love New Orleans more than I've ever loved a particular place.

Most recently, I loved my neighborhood. Every morning, friends passed by our corner on their way to school. We'd hurry up tying our shoes to join them.

Of the thousands who evacuated to the towns surrounding Lafayette, a handful are from my street. We fled on the buddy system and hooked up when we got here. We've met for pizza and seen ourselves in each other, and we've drawn some comfort from that.

Now, as the TV news reports rising floodwaters and worse, it is becoming more difficult to speak to each other about our plans and how long we can hold on.

I haven't told you about Katy Reckdahl. She's a staff writer I hired a couple years back, and she writes about the hardest-hit citizens of New Orleans, including those who put themselves on the trigger side of a gun. She cares about all kinds of people. She knows this city better than most, and I am better for having worked with her.

On Saturday, when I was driving my kids out, she was having her first child, a boy, in Touro Infirmary.

Last I heard, they were moving people from floor to floor in Touro, and will now be evacuating them, along with others stranded in hospitals with no air conditioning and sealed windows, generators running out of gas.

At The Times-Picayune's web site, stories like mine pile on top of each other. Looking for grandfather. Want to hear from my friend. What do you know?

Meanwhile, the TV stations traffic in comparisons: a war zone, Hiroshima, the tsunami, a third-world refugee camp, 9/11. I try not to think like that, but Woody Guthrie's Dust Bowl Ballads keep coming to mind. He wrote them about another time when the forces of man and nature sent refugees into America: "So long, it's been good to know you."

As I write, what's left of New Orleans is being swallowed up. Gov. Kathleen Blanco - whose maternal concern has helped me through each day - is removing the last of us from the flooding city. The next journey belongs to the tens of thousands in the Superdome, now on to the Astrodome in a fleet of buses.

A couple hundred miles away, we have new household decisions to make. "I'm getting pretty bored of not having school," my 7-year-old daughter announced today. A week ago, her life was filled with first-day-of-school excitement. Now, there's maybe a Catholic girl's academy. The public schools are also taking in the children of New Orleans. My wife returned from a registration session, speaking through tears about the warmth and efficiency.

We're staying with friends who just keep saying "as long as it takes." Last night, one of their neighbors showed up with smothered steak, rice and gravy, cabbage and sausage, and bread pudding. Another showed up with margaritas.

Decisions. Maybe we'll call my daughter's first-grade teacher, who evacuated to a nearby town, and we'll set up a home school. The Saturday we left, my daughter was in his classroom a block up the street, playing on the computers while he put together lesson plans. "I want to go to Mr. Reynaud's," she'd beg every week until we relented. That's one of those memories that seems untraceable now. It leads nowhere.

I also have a 4-year-old son. Last night, we were unfolding our hide-a-bed and putting blankets on the floor. "Did you see this?" my wife said, holding a book he'd made last month, before this hurricane had begun to form. He had drawn the pictures and recited the story, and my wife had taken his dictation. It was titled "Miles and the Sun!" and it goes like this:

"One spring day, Miles came out of his house in New Orleans. The sun was happy to see Miles. The sun was wearing sunglasses. Miles moved to his new house and the sun got very very hot. Now it was even hotter! A fearful wild storm came with lots of monsters. Luckily Miles wasn't in it. The water splashed all over it."

The drawing for that last page was all deep, hard-pressed scribbles.

Last night, he sat on my lap and looked at the TV and the people walking through the water. "Are those the people who didn't evacuate?" he asked, carefully enunciating his new word.

New Orleans is gone and I can't say when it will come back. My neighborhood, my job, all of it might somehow return.

Yet I don't know what a rebuilt New Orleans will look like and I don't know if I'll be there for it. For now, we're living on the generosity of others.

That's what it's like to be a refugee. You never know what's next.

Michael Tisserand is the editor of The Gambit Weekly in New Orleans. He is currently living in Carencro, La. at the home of the editor of Lafayette's Independent Weekly. The publisher of the Gambit, Margo DuBos, reports that all of her employees are safe and that while the paper's office is submerged, key computers were moved to safe ground before the storm. Despite that, DuBos doesn't believe the Gambit will publish a paper edition before the end of this year. The Association of Alternative Newsweeklies has raised almost $38,000 for the paper and its employees by press time.