'Suburbicon' is a tonally uneven condemnation of white privilege

George Clooney (Confessions of a Dangerous Mind; Good Night, and Good Luck; Leatherheads; The Ides of March; Monuments Men) directs this black comedy written by Joel and Ethan Coen (Blood Simple, Miller's Crossing, Fargo, The Big Lebowski) about a lilywhite suburban community troubled by the arrival of an African-American family and a home invasion. (104 min.) 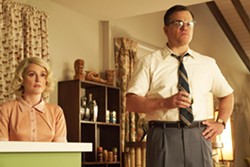 Glen Clooney's newest foray into directing takes aim at the '50s mythos of America's idyllic past. It's 1959 and Suburbicon is a planned community of cookie-cutter homes, manicured lawns, and white privilege. The story focuses on Gardner Moore (Matt Damon), a white collar worker married to Rose (Julianne Moore), who's confined to a wheelchair. They live with their son, Nicky (Noah Jupe), and Rose's twin sister, Margaret (also Moore in a dual role), who's there to help her disabled sister. They fit right into the close-knit neighborhood where the mailman (Steve Monroe) knows everybody and where kids safely roam free. The neighborhood's tranquility begins to disintegrate after the Mayers—a black family consisting of Mrs. Mayers (Karimah Westbrook), Mr. Mayers (Leith M. Burke), and their son, Andy (Tony Espinosa)—move in. Clooney does a great job creating a milieu that's pulled right out of '50s sitcoms like Leave It To Beaver or Father Knows Best. He also really captures the hollow rationalizations of racism in the community's response to the Mayers. The film's big trick is that the community believes the Mayers are ruining the neighborhood but fail to see that Gardner is the real monster lurking in the midst. The spiral into Coen brothers' style violence begins when Gardner and his family are victims of a home invasion by two thugs named Sloan (Glenn Fleshler) and Louis (Alex Hassell), but there's something fishy about it all. As the story progresses, we discover that Gardner's brought his troubles upon himself.

Anna The aesthetic of this movie is its greatest selling point—a slice of 1950s suburbia life and the clothes and closed-mindedness that come along with it. While the Moore family members themselves don't seem to have much of a problem with their new neighbors the Mayers, the rest of the town is shocked and offended by the very idea of them in Suburbicon. Soon enough, privacy fences are being erected, protests are being made, and the Mayers' ability to ignore the haters is tested. The film is sort of trying to make a statement on race, just as it's sort of playing at a Fargo-esque murder mystery, and a sort of satirical statement on polite society, but it fails at really hitting the mark with any of those. I didn't find the ending wholly satisfying, and I was left with questions, though none I was particularly interested in pursuing answers to. There is a lot of talent involved in this film no doubt, and the Coen brothers in the past have delivered some of my favorite films, but this one misses the mark, and not just for me. It has dismal scores on Rotten Tomatoes: Both critic and audience scores hover right around 25 percent. While I didn't mind fawning over Moore's perfectly pressed housedress, the cool retro vibe of the film isn't enough to make it float.

Glen In retrospect, I think I liked it more than you. As a quirky crime drama, it's certainly no Fargo, but I think expectations are often set too high for Coen brothers' films, and its ending certainly doesn't leave viewers with a satisfying sense of resolution, which may be why reviews have been so poor. However, considering the current abysmal race relations in our country, I find the film's desire to point out the hypocrisy of racism and white privilege an ambitious and worthy goal. I also think Clooney's direction is excellent here, and the acting—especially Moore—is really engaging. In addition, the casting is so spot on! The two thugs look like they were resurrected from a '50s film noir. This is a well-crafted, beautifully shot film. Perhaps the story is unsatisfying because white people don't like watching stories about what assholes we are. Ultimately the story is a tragedy, which supersedes its desire to be a black comedy, and I think it's meant to say something about present-day America. Did it succeed? Obviously not for most viewers and critics, but I have a feeling this is a film that—like The Big Lebowski—might find an audience over time or at the very least come to be recognized as representing America's current zeitgeist. All I know for sure is that I don't want director Clooney and writers the Coen brothers to stop collaborating. Eventually they're going to knock something out of the park.

Anna I think Clooney and the Coens work really well together and did put out a polished piece of work, but The Big Lebowski this is not. I'll be pretty surprised if Suburbicon has a cult following in 20 years and is still shown on the big screen regularly. The most powerful part of the film to me was the ever increasing vitriol and violence toward the Mayers, while all along the real evil is happening right next door inside a very mild-mannered, white household. Even at the end of the film after the riots were broken up, the TV still features interviews with Suburbiconites blaming every worry in the world on the quiet and law-abiding Mayers. They learned nothing and didn't get punished for their bad behavior, which is totally frustrating. The internal story of Gardner's family is pretty engaging as well, and I agree that Moore's performance was particularly good here. She's like a decadent cupcake laced with cyanide. I didn't hate the film, but it's not my favorite work of either the Coens or Clooney. That said, keep at it, boys! The team is certainly capable of producing some great work and has access to very talented actors and actresses to convey it. I'd watch this film again if it came on demand, but a must-see in theaters? I don't think so. Δ