Disclosure: Neal Bretonhas had a longstanding and multifaceted relationship with New Times. The artist is our frequent freelance illustrator—his drawings brought to life our annual 55 Fiction short story contest, among other things, and his doodles created in city council meetings recently began to appear our pages, too. Breton’s bearded likeness and colorfully snarky quotes tend to show up in our paper as well, simply because he happens to be participating in the events it features—and, I guess, he’s loud. We’ve covered his alternative art walks and shows at his store, San Luis Art Supply. It’s not that we favor him; he’s just everywhere, making art and controversy happen. 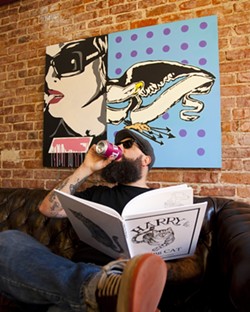 Worse, Breton—ah, what the heck—Neal and I have also collaborated on literary and artistic projects outside of work. I’ve even been to a few of his hippie commune’s house dinners.

But I’ve never actually written about his art. Now, in light of his first solo show in three years, “Die Trying: New Work by Neal Breton,” hanging through Nov. 15 at Sally’s Loo’s, it’s about damn time.

“Die Trying” goes quite a long way in explaining what Breton, and his art, represents. It’s optimism steeled against opposition. It’s embracing being misunderstood, exuding a special brand of jaded hope in life and art and humanity. It’s cuteness in tragedy.

“I am in love with dichotomies,” Breton acknowledged, sitting at our hard-won table in the midst of a Sally Loo’s morning rush. “Oftentimes I paint very sad things in very beautiful, happy colors.”

The title also reflects Breton’s difficulty getting the attention of local galleries—a situation made even harder to swallow considering he relocated to the Central Coast from Los Angeles, where finding a gallery space for his bold, bright, subversively poignant paintings was considerably easier.

“The last couple of years, when I was looking for a show, I was rejected, three, four times, from mainstream galleries,” Breton went on. “I didn’t want to do a coffee house in this town. I felt like I worked hard enough. I hustled, and I produced good work. I felt like for once, I deserved to be in a gallery. At least in this town. But when I didn’t get it, I was a little disheveled.” 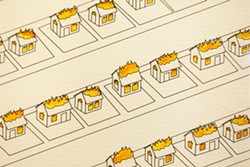 In the years since his first local show, the artist has totally remade his aesthetic. The change was partially due to his owning an art supply store, where knowledge and experience in his products is imperative. But beyond that, Breton said, his slightly cynical, pop-arty acrylics on canvas “got to a point where it became work. I don’t want something that I enjoy to become work.”

The dioramas, watercolors, and doodly drawings that populate the new show are Breton’s present mainstays. He’s also dabbled in encaustic painting and woodcuts. The Decadent West is the current show’s only holdover from what you might call Breton’s L.A. period.

“I wanted to have the most amazing display that I could,” he said of Sally Loo’s offering him a solo gig. “I wanted to explore the depths of my own creativity. I wanted to incorporate everything I could, including just shitty pet sketches that I did.”

The result is stunning, but maybe not immediately so. The works’ subtleties and smaller scale mean the show as a whole requires considerable time to digest.

Here are true gems—like Zeus: The College Years, a 3-D piece containing a woodcut of the barfing deity—beside messy lined-paper sketches, framed as priceless artifacts. Many pieces, like Waiting for Griselda, employ a cartoonish surrealism, drawing you in with their nice watercolors and friendly, rounded edges before surprising you with their frightening, or just bizarre, situations.

The work My Love For You is a Row of Houses Set on Fire manages to be one of the show’s most layered and most instantly compelling. From its tiny depictions of suburban arson (which turn sort of precious once you step back, like nursery room wallpaper) to the custom frame (an upturned L), to the real matches nonchalantly emitting painted plumes of smoke(actually a separate piece titled Adventures in Pyromania), the composition feels satisfying—like a complicated, fussy matter cleanly collapsed into a single statement.

Breton originally aimed to display 100 pieces, but it’s a good thing he settled on 60. Between the framed works, the rather spontaneous paintings on the walls (props are most certainly his due for pulling this off between closing and opening shifts), and extra goodies like a sketchpad mounted on an adorable miniature swing—the handiwork of housemate Adam Monkaba—there’s more than enough stuff to engage the senses. It’s a comprehensive look at Breton’s process and progress.

Still, he calls his show a collaborative effort, insisting it never could have happened without help from friends, coworkers, and fellow artists—though this ragtag army sometimes lacks motivation.

“Despite what people may think about me, I have an optimistic faith in humanity—that I think is constantly being tested,” he said. “But I refuse to falter on that belief that people will do the right thing. Even if you have to force them to do it."