Suey Ranch falls under a microscope

When a majority of SLO County supervisors tentatively approved the transfer of 5,070 acres of prime SLO County agricultural land to Santa Barbara County, the decision puzzled many people.

Supervisors Jerry Lenthall, Harry Ovitt, and Katcho Achadjian did not object to a petition by Suey Ranch owners H.D. and Carol Perrett to move a portion of their 39,000-acre ranch across county lines when it was brought before them on Aug. 26. SLO County supervisors will take a final action on Sept. 16, but unless there is at least one more “no” vote, the transfer will proceed. 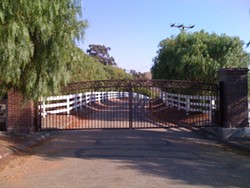 Suey Ranch borders Santa Barbara County and a portion of Santa Maria. The Perretts put in a request for the transfer in 2005 but it was unanimously shot down. Three years later that request is back on the table under the same premise as before: The Perretts believe the ranch would be better served by Santa Barbara law enforcement.

The property, however, provides SLO County with $58,000 per year in property taxes and is said to have some of the best agricultural soil in the state, producing 26 percent of the county’s avocados.

Suey Ranch is an enormous property. Its rolling hills are covered by lemon groves, grazing land, vegetable crops, and thick forests of avocado trees that block sunlight from reaching the ground below.

Turning the ranch over to Santa Barbara County would also turn over any local say on future land-use decisions. And that loss of control worries some people that Suey Ranch could become a sea of residential development.

The Perretts have stated they intend to keep the ranch in agricultural use and would profit less if the land were developed or sold.

The Perretts have given some of their profits to Republican political campaigns at the local, state, and national level.

Both Lenthall and Ovitt denied that the contributions had any influence on their votes.

“I have given the same courtesy to Mr. Perrett as I have to others who have contacted my office on a variety of issues,” Lenthall said in an e-mail.

“The Perretts did contribute to my campaign,” Ovitt said by e-mail. “This is not considered a conflict of interest and was not measured as a means to buy a vote.”

H.D. and Carol reported contributing $58,800 to local, state, and national campaigns in 2006. H.D. was reticent to talk about specifics, but adamantly denied that the contributions helped his petition to transfer the land.

“I haven’t seen a direct connection between contributions and how responsive [government is],” he said.

Supervisors James Patterson and Bruce Gibson were adamantly opposed to the transfer. Neither of them received contributions from the Perretts. Supervisor Katcho Achadjian also did not receive any of the Perretts money but has been one of their main proponents.

For Achadjian it’s all about water.

The Nipomo Community Services District (NCSD) hopes to buy 3,000 acre-feet of water from Santa Maria to meet its future growth needs. According to Achadjian, Santa Maria officials are interested in Suey Ranch and he believes that the transfer could help persuade the city to sell Nipomo some of its water.

But nothing is on paper because doing so could be perceived as submitting a project, thereby triggering a California Environmental Quality Act review. Although there has been no formal agreement, Achadjian said he believed Santa Maria officials are being “sincere.”

“Since this property was in front of us and they seem to like it, it was a match,” he said.

Santa Maria and Santa Barbara County officials did not return e-mail requests for comment. H.D. said he did not know why Santa Maria would be interested in the ranch.

The board is not alone.

The Port of San Luis Harbor District, SLO County Agricultural Liaison Advisory Board, the Environmental Center of SLO County, and an increasingly vocal sector of the public have also urged county supervisors to oppose the transfer.

The buzz phrase by the opposition has been that there is “no compelling reason” to allow the transfer. And questions over potential future development have permeated nearly every argument against the Perretts’ request.

While providing the New Times with a tour of his property, H.D. said that he has absolutely no intentions to develop the property beyond agriculture. The Perretts own several ranches, he said, but he did not reveal how many. H.D. bought Suey Ranch about nine years ago and has since invested more than $20 million setting up the crops.

“I’ve spent a lot of money on this thing and a lot of sweat,” he said.

But in 1999, the Perretts did sell about 13,600 acres to Enron-subsidiary, Azurix, Inc. The company intended to use the Perretts’ ranch in Madera to collect and sell water from the underground basin,

but ultimately failed. The Perretts bought the property for $8 million and sold it for $31.5 million, according to news reports at the time.

Asked about the Madera Ranch sale, H.D. again said he would not sell Suey Ranch. Some of his crops have only recently matured, he said, adding that his only plans for development are to plant more avocado trees.“I have absolutely no intentions of selling it.”

The SLO County Planning Commission will weigh in on the transfer on Sept. 11, having not been able to take a formal position before county supervisors took their first vote.

As H.D. drove down the road on the way back to his office he slammed on the breaks, jammed the car in reverse, and then stopped again to point out refrigerators that had been illegally dumped on the side of the road.

“Is it gonna be a miracle?” H.D. asked, of improving policing of the ranch, “Probably not, but it’s gonna help.”

Staff writer Colin Rigley can be reached at crigley@newtimesslo.com