Janelle Younger was digging around a craft fair for choice metallic scraps when she bumped into a fortuitous new friend. That mysterious acquaintance turned out to be none other than Jeff “Barn Boy” Sauer, who—as his name would suggest—works solely with reclaimed barn wood. Chairs, tables, you name it: Sauer breathes new life into old timey materials left and right.

“I asked him, ‘What are you doing with all the hardware?’” Younger said. “His eyes widened. He had buckets and buckets of hinges, cool old knobs and latches—just rusty crap.”

Her layered, corroded hanging pieces are shown and sold at art shows (the wood burn poster she created for this year’s Live Oak Music Festival will be auctioned off to benefit the annual event). Other pieces—hunks of wood and steel banged together with nails and adorned with glued-on baubles—are installed in her own back yard. This art’s almost human: It has a birth, life, and death. 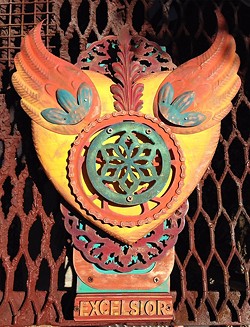 “For me, that is the beauty—seeing the way things fall apart,” Younger said. “I love the textures as the pieces are disintegrating. Wood develops interesting aged grain and metal rusts. It connects all of us, the way I use stuff we all have in our houses. It’s the things we take for granted, the overturned kitchen drawer you’ve seen so many times. I like to do something completely unexpected with it.”

Both Younger and Sauer will show their works at The Bunker during an upcoming June 27 group show.

Sara LeGrady’s art will also be on display, and she’s stoked to get her foot in The Bunker door. She’s lived in SLO for a decade, using her talents to create signage for North County haunts like J. Dusi Wines and Vina Robles Amphitheater.

Now, she’s coming into her own with vivid female-centric paintings that evoke an emotional resonance. Like the female form, her pieces are fluid yet strong, with an ethereal, lit-from-within look that warrants respect and appreciation.

“I believe in our right to express ourselves and be who we are, free from judgment or assumptions,” LeGrady said of her work.

Speaking of “girl power,” there’s another fearless lady throwing her hat into the ring. Janine Stone will show what can happen “if you give a girl a saw,” a hypothetical musing that also serves as the name of her Etsy shop.

“It all started when I wanted to make a shoe rack and had no idea how to do woodwork whatsoever,” Stone said. “I found out how to make a few cuts of a saw to make the rack, and it blew my mind. You can do so much with a saw.”

A headboard and coffee table came next. When Stone ran out of room in her own house, she started the Etsy shop.

Now, the woodworker’s creating functional forms and hanging visuals—pieces you can both admire and safely eat off of. It’s been a whirlwind of sorts. Stone began creating her work in December. Now, just six months later, she’s making her big splash in SLO’s energetic underground arts scene.

“I’m just really excited to meet all the other artists,” Stone said.

If that’s not the point of an art space like The Bunker—to connect emerging artists with audiences—I don’t know what is.

Hayley Thomas is looking at her old silverware in a new way at hthomas@newtimesslo.com.