It's hard to believe UB40 has never played here before, but apparently their Friday, July 7, show at the Avila Beach Golf Resort is their Central Coast debut (doors at 5:30 p.m.; all ages; $37.59 to $90 tickets at Boo Boo Records or eventbright.com).

Best known for the Neil Diamond cover "Red Red Wine" (No. 1, 1988) and "Can't Help Falling in Love" (No. 1, 1993), first made famous by Elvis Presley, UB40 is one of the most successful reggae bands in the world. They formed in 1978 in Birmingham, England, as a group of multi-racial layabouts whose band name came from the British unemployment form.

They began playing on instruments bought with money paid to guitarist-singer Ali Campbell from injuries sustained in a bar fight, and they were so bad they nearly quit, but by the end of a year, Chrissie Hynde of The Pretenders had invited them to tour with her band.

They've charted more than 50 songs on the UK Singles Chart, earned multiple Top 10 Gold and Platinum selling albums, been nominated for Best Reggae Album Grammy four times, and in 1984 they were nominated for the Brit Award for Best British Group. All told, they've sold more than 70 million records.

The original lineup included musicians of English, Irish, Jamaican, Scottish, and Yemeni descent, and today the band contains three original members: Campbell, Astro, and Mickey Virtue, who have reunited once again to bring their show to Avila Beach.

Expect to hear hits such as "Food for Thought," their version of Sonny and Cher's "I Got Babe," and more. Matisyahu and Ragin Fyah will open the show. A portion of the proceeds benefits the Rossi Foundation—a nonprofit 501c3—and all the community charities it supports. This show is brought to you by California Roots and Otter Productions Inc.

Central Coast Pride has a bunch of great events coming up this weekend, starting on Friday, July 7, with the annual Drag Show, at the SLO Guild Hall (6:30 or 8:30 p.m.; 21-and-older; $20 at slopride.com). Hosted by Tommi Rose, the event includes three stars from RuPaul's Drag Race. Doors open 30 minutes before show time.

On Sunday, July 9, Pride in the Plaza returns to the SLO Mission Plaza (noon to 5:30 p.m.; all ages; free), with entertainment all afternoon, including punk style pop by the Makeover Band, an ABBA tribute by The ABBA Show, and a Lady Gaga tribute by Tierney Allen. Afterward, the fun moves to Novo Restaurant & Lounge from 5:30 to 9:30 p.m. Seating is limited, so first come first served (all ages; free).

Australian alt-rock headliner Atlas Genius went from a little-known Aussie act to international stardom after their song "Trojans" was featured on the Neon Gold website, resulting in 45,000 downloads in the U.S. as well as several record label offers.

Formed by brothers Keith (vocals/guitar), Steven (bass), and Michael Jeffery (drum), along with English friend Darren Sell (keyboards), they started as a cover band, using their earnings to build their own recording studio. By the time they signed to Warner Bros., they were a trio after Steven left the band. They recorded Inanimate Objects, their follow-up to their debut When It Was Now, in California, releasing it in 2015, meaning they're just about due for another album, so expect some new material.

Hayley and the Crushers return to Sally Loo's for the second annual Summer Crush Pool Party this Sunday, July 9 (6 to 9 p.m.; all ages; free). Like last year, the event features original art and set design by Neal Breton and begins with a DJ set by DJ Mano Gil, not to mention summer goodies such as gourmet cotton candy courtesy of Haute Sugar and delicious food and punch from Sally . 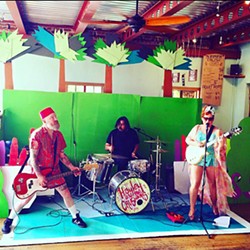 "Pride in the Plaza is the same day from noon to 5:30," Crushers front-diva Hayley "" Cain said in an email. "Our will take place immediately after. We hope to support the local LGBTQ community with a suggested donation to 5 Cities Hope, a very new grassroots nonprofit that fun and safe events for this vibrant community in the Five Cities area."

Bring some extra dough and pick up a copy of the Crushers' debut album Jewel Case, a great collection of bobbing fun summer surf songs with a punk edge.

"The main spectacle is local artist's Neal Breton's new poolscape brought to life by plywood, paint, spray paint, and cardboard," Hayley added. "Members of the band, local business owner Jenn Hix, and Neal are working together to create this artscape—which promises to be bigger and better this year. Prizes will be given for best Beach Goth and Beach Bunny, so attendees are encouraged to dress in their favorite summer garb. Hawaiian shirts, grass skirts, toys, sunglasses, summer hats, board shorts, and even swimsuits are all encouraged!"

Heathens at the gate

Good Medicine Presents brings Austin-based Americana rockers The Band of Heathens back to the Central Coast for an intimate night of wine and a catered dinner on Tuesday, July 11, at Paso's Tasting Cellars (6:30 p.m.; all ages; $65 presale at ticketfly.com, or $75 at the door ... if available; tickets are limited).

The band is touring in support of Duende, their fifth studio album, whose title means "1. a quality of inspiration and passion 2. a heightened sense of emotion, expression, and authenticity 3. a spirit," according to the band's bio.

As co-founder Ed Jurdi explained in press materials, "It's the essence of the artist." Or as bandmate Gordy Quist added, "It's a word we don't have an equivalent for in English. Artistically, that's where we tried to set the bar, to do what this band does best."

On Duende, you can hear high-energy rockers such as "Trouble Came Early" and "Keys to the Kingdom," or the pedal steel twang of "Green Grass of California"—"an ode to the more potent strains of sensimilla on the dispensary shelf and a fervent plea to 'legalize it.'"

Songs explore everything from the sacrifices of life on the road ("All I'm Asking") to materialism ("Keys to the Kingdom"), from social media ("Cracking the Code") to Mexican immigration in an era of discrimination ("Road Dust Wheels").

"While modern technology has certainly allowed us to stay in touch over vast distances—something a band that lives on the road certainly appreciates—it doesn't really provide the authentic connection we crave," Quist said. "We've created a portal through which we lose ourselves and miss what's really going on right in front of us, hiding the fact that our supposed connected culture can be a really lonely place."

Added , "I feel the album brings together all our influences, everything we've done over the years as a band. We've touched on every part of our career ... our roots, some singer-songwriter contemplative stuff, [and] some high-energy rock 'n' roll. It's all us, the record we were supposed to make. Ten years later, that's what keeps us coming back."

Duende charted at No. 1 on Americana Radio list, with "All I'm Asking" now at No. 22 on the Triple-A charts. This is a great live act! If you're looking for a night of good music, good wine, and good food, get your ticket before they sell out.

The Clark Center hosts the Beach to Broadway Summer Recital this Saturday, July 8 (6 p.m.; all ages; $20 tickets at 489-9444). Student performers from The Studio of Performing Arts will sing, dance, and act their way into your heart. 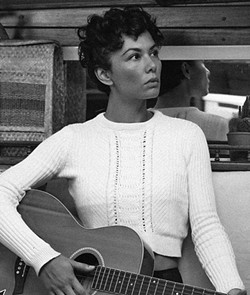 Two singer-songwriters—Caleb Tesnow and Daniella Smith—play Linnaea's Café this Saturday, July 8 (7 p.m.; all ages; free). "Caleb is a folk-rock singer-songwriter with an incredibly powerful story," Smith wrote in an email. "He spent over five years in the U.S. Army with two combat deployments, one in Afghanistan and one in Iraq. He's now trying to musically spread awareness about the fear that controls the human experience, through thoughtful lyrics and energetic music and showmanship." Of her own musical style, Smith added, "I'm an ultra mellow jazzy singer-songwriter passionate about the communication and connection tool that music is for people."

Linnaea's Café hosts soul-fusion duo & The Huz-Band this Tuesday, July 11 (7 p.m.; all ages; free), playing originals and "and a twist on some of your favorites from the '60s to today's top charts," the band said in press materials. Δ