The Summer in Pastels: The Pastel Artists of the Central Coast show is currently on display at the Atascadero Library through Aug. 30. A reception to meet the artists will be held on June 4 at 5 p.m., with light refreshments served. Visit slolibrary.org for more information.

No matter what else she tries, Paso Robles artist Linda Garen Smith keeps coming back to pastels.

"My mother gave me a little set of Rembrandt pastels many, many years ago," Smith said. "There was something about the vibrancy and purity of the colors. My best work is always in pastels."

Smith's pastel work, along with that of Carolyn Braun, Susan Clark, Shelley Snow, Ginger Toomer, and Priscilla White, is currently on display at the Atascadero Library as part of the Summer in Pastels show put on by the Pastel Artists of the Central Coast. These artists create their paintings using a powdered pigment that is rolled into sticks.

While Smith often takes her inspiration from nature, she's looking for more than just a pretty scene when she paints.

"There needs to be a story there," Smith said. "I try to paint an emotional response to something rather than the object itself."

Her piece, Man With A Pearl Earring (a nod to the famous Johannes Vermeer piece, Girl with a Pearl Earring) is based off a photo that Smith took of an actor at a Renaissance faire. She describes her artistic style as "colorful."

Shelley Snow, another Paso Robles pastel artist, loves pastels because they can perform like oil paints or even water colors depending on how they're used. 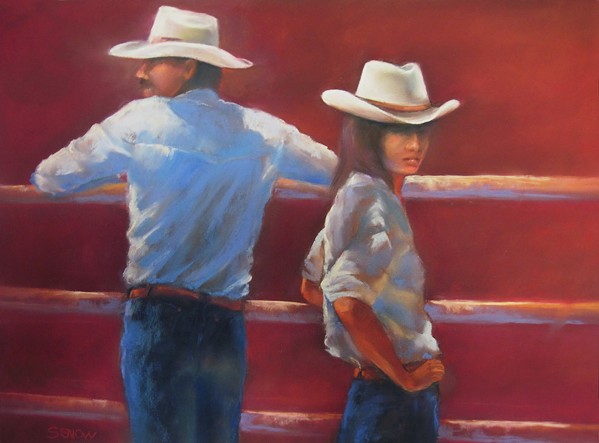 Snow takes her inspiration from people. While people were watching a rodeo event at the California Mid-State Fair, Snow was inspired to create a series of paintings, including Hangin' Out.

"They're very seriously watching this stuff," Snow said. "I'm kind of interested in the drama of people."

While Snow also works in landscapes and portraits, her work remains consistent stylistically.

"I tend to be very realistic," she said. "It's representational."

Snow hopes viewers of the show will walk away with a new appreciation for her favorite artists' tool.

"I would like them to see pastels as a medium," Snow said. "The brilliance and the textures of pastels ... it's fascinating. We're all nuts about pastels." Δ