SUMMER OF SOUL (... OR, WHEN THE REVOLUTION COULD NOT BE TELEVISED)

Questlove directs this new documentary about the 1969 Harlem Cultural Festival, an event overshadowed by Woodstock and in part ignored because it celebrated African American music and culture, promoting Black pride and unity. It features appearances by Lin-Manuel Miranda, Chris Rock, Stevie Wonder, and many more, as well as archival footage of Nina Simone, B.B. King, Sly and the Family Stone, and others. (117-min.) 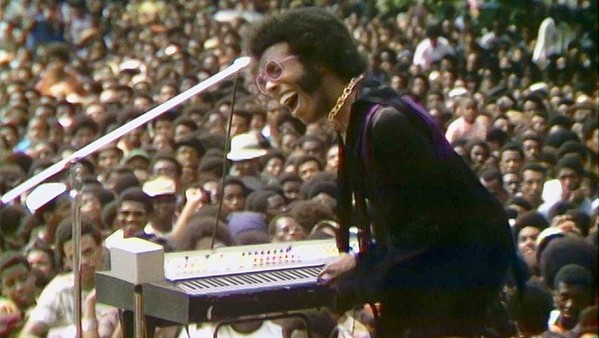 Glen If you think Summer of Soul is just another concert film, you're very much mistaken. This is a history lesson, an economics lesson, and a sociological lesson that just happens to have amazing, never before seen live performances by Stevie Wonder, Nina Simone, Sly and the Family Stone, Gladys Knight and the Pips, Mahalia Jackson, B.B. King, The 5th Dimension, Pop Staples and the Staples Singers, and more. Filmed in 1969 over six hot summer weekends in Mount Morris Park (now Marcus Garvey Park), the videotapes were shelved and forgotten, just like this festival. Questlove finds some of the people who attended the event, and we watch as they're shown footage and prompted to recall how they felt. He also interviews some of the performers who are still alive, and again, we watch them as they watch the footage, reliving a very defining moment in Black history. We learn from former New York Times reporter Charlayne Hunter-Gault that 1969 was the year the Black community went from being called "negroes" in the press to "Blacks." We learn about the crossover between the Black and Hispanic communities of New York facilitated by music. There are so many moving moments, and the original 1969 cameramen who captured the concert series had the good sense to turn the cameras on the crowd, capturing the mood, the fashion, and the energy of this seminal moment in history. It's like opening a time capsule.

Anna What an experience this festival must have been! I'm sure everyone who attended still pinches themselves when they think about how lucky they were to catch these acts on stage and the solidarity that this festival brought to the Harlem community. The film delves into some of the intricacies of the music and musicians as well, from the differences in how Babatunde Olatunji, Mongo Santamaria, and Ray Barretto hit their drums to the different elements that both their shared and separate heritages brought to the music. It's lively and inspiring. Watching the audience, you can tell that this was a hugely spiritual experience, one that got swept away when studios at the time refused to think people would want to watch and experience Black music. I'm sure this festival was on the radar for a lot of diehard music aficionados, but I had never heard anything about it—which is pretty outlandish when you look at the all-star lineup of performers. The Palm is a great theater to see this film; it feels intimate and engrossing, and listening to this music and the people talking about it while seeing all this amazing archival footage on the big screen is dazzling to say the least.

Glen Hearing Mavis Staples recall singing Martin Luther King Jr.'s favorite hymn, "Take My Hand, Precious Lord," with Mahalia Jackson at the festival was a real highlight for me, and archival footage of that performance is riveting. The 1960s was a boom decade for assassinations between John and Bobby Kennedy, Malcolm X, and Dr. King, and the Black community clearly felt the sting of those murders in ways others didn't. This was also the beginning of the "Black is beautiful" era, and artists like Nina Simone were reminding her community that it was filled with people who are "Young, Gifted, and Black"—a message that resonated after so many years of segregation and Jim Crow. This is a film about a community celebrating itself, lifting itself up, despite continued racism, poverty, and lack of opportunity. And the music! My god! These are amazing performances. As the camera panned the crowd, in the rare moment I saw a white face, I thought, "Man, I wish that was me." What a moment in time!

Anna That Mahalia Jackson and Mavis Staples duet was so incredible. That's the kind of performance that will bring me to tears. It was also interesting to hear people talk about Stevie Wonder and his performance. At the time, there were questions about whether he would stick with his hits from the '60s and continue in that successful yet tired vein or branch out into something bigger, bolder, and more experimental. Let's just say he brought the heat in that performance and there wasn't anything conventional about it. All of this music is far before my time on this earth, and while it speaks to my heart because I grew up listening to all of these artists and bands, it is a whole different experience to watch them perform and to do it to a huge crowd who are having an experience that you know they will never forget nor re-create. Questlove manages to build a history while keeping the music flowing, and as far as interviewees, he scores with a wide range of characters who were there, knew the people involved, are from the neighborhood, or bring big insight into what a phenomenon this time was. To see the park cleared out after the festival and then hear that it was thoroughly pushed aside and hidden away is so sad, but I'm so glad we get to experience this magic now. Δ