After years underground, the idiosyncratic late-night diversion known as bike sumo is back and stronger than ever

A balmy late-spring front descends on the city of San Luis Obispo. For the first time in weeks, an evening mist remains in the hills and, through a clear sky, the moon waxes toward a mid-cycle crescent. In the valley, it feels like atmospheric perfection. The rainy season is finally overâ€”and just in time.

# Downtown, signaled by the random ringing of bells and the mellow glow of hundreds of low-wattage lights, something curious brews in the shadow of the old mission. Numbers gather for â€œThe Happening,â€? and a congregation of oddball bicycle enthusiasts invades the plaza, as it has on the first Thursday of every month for the past six years. But this running of the street event seems somehow different. This time, the ranks swellâ€”a credit owed partly to the flawless evening and, also, the added pageantry of an ever-popular â€™80s theme. A mysterious gentleman ascends the staircase to address the crowd, much as the ancient Spanish fathers of missionary California would.

â€œIâ€™m going to take a ride,â€? he proclaims. â€œIf anyone wants to join meâ€”thatâ€™s cool.â€?

Just before departure, one last batch of Spudz-McKenzie-T-shirt-and-sleeveless-jean-jacket-donning, bleach-white-Espirit-woven-shoe-wearing bicyclists trickle in. At last, San Luis Obispo is ready to Happen.

When the go-ahead sounds, a critical mass of new-wave Slobispans depart the meeting point and cruise a downtown loop, whimsically pedaling about on bicycles of every sort, some so arcane they defy imagination. Sporting neon headbands, Guess Jeans, and Members Only jackets, the happeners transform a tranquil after-market Higuera Street into Electric Avenue. Cindi Lauper, Brett Michaels, and Ted McKinley impersonators highlight the guest list. Even Elliot and E.T. make an appearance, casually rolling past some of San Luis Obispoâ€™s finest, who mosey with arms crossed and walkie-talkies in tow. It is a most triumphant bike happening, indeed. Not even Sgt. Hulka could hide his approval. 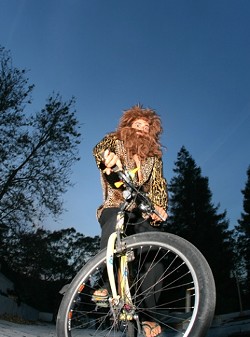 # As the ride winds toward a finale, a few bikers lead the column along the downtown corridor into a cracked pavement lot behind Wallyâ€™s Bike Works, where the main event will soon take place. Dismounting and locking up their gear to any pipe, pole, or tree available, rowdy spectators form a circleâ€”just a few meters wideâ€”in the dimly lit expanse. Guest play-by-play announcer Phil Novotny climbs a makeshift podium, brandishing a handheld megaphone. Below, the bike sumo combatants prepare for an anticipated contest.

The primary elements of the sport are simple enough: two wrestlers, one ring. The first to twice unseat the other from his mechanical steed advances to the next opponent, until everyone in line is defeated. The diversion sounds, at first impression, almost as random as it is basic, but the element of skill quickly becomes apparent to first-time viewers. Some wrestlers prove remarkably adept at maintaining their balance. Others fare, well, more like the rest of us would. An overzealous competitor, in his aggressiveness, might go barreling over the handlebars, while the opponent manages to escape into the open spaces of the ring. Thus, in this game of delicate balance, the fragile equilibrium and experience comes at a premium.

On this occasion, however, a well-attended edition of the rambunctious rally brings a few interesting newcomers to the scene. Most of them arrive with clever aliasesâ€”the mark of showcase wrestling in all its forms.

â€œEveryoneâ€™s kind of got a different personality in the ring,â€? participant Evan Chambers explained. 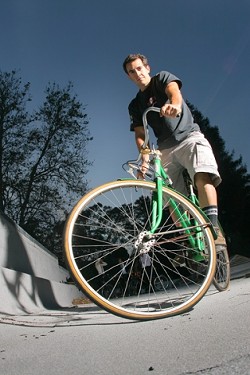 # The veterans hungrily eye their fresh-faced competition, wholly expecting a skirmish. Across the aisle, a BMX crew hopes to score some victories against the vets and further establish its legitimacy in the ring. The division seems intense, but seek no animosity hereâ€”a respectful distance exists between the two clans.

â€œWe donâ€™t know any of them. Theyâ€™re pretty inconsistent,â€? Murphy said. â€œTheyâ€™ll disappear for a while, eventually show up, and do really well. They use more tricks, like swinging to whip you with their back tire. Itâ€™s pretty damn cool.â€?

Regardless, neither faction will prevail this night. Much to the chagrin of both circles, the greenhorn challengers will soon prove their mettle.

The intrigue commences a few matches in when an unnamed contestant, teetering perilously on a unicycle, captures the adoration of the crowd. Appearing utterly handicapped in the battle of balance, the maneuverability of this strange challenger emerges as a potent asset. He falls with every attack, but rarely first, pivoting carefully to strike his opponent with precision. The astonishing underdog manages to advance two rounds, as a captivated crowd roars with boisterous applause at each kamikaze attack. Then, he falls.

Three more rookies assemble impressive winning streaks over the course of the night, knocking off fan favorites Boa Lady, Wagon Boy, and even the legendary Yard Sale Dan en route. The meeting concludes with a title match between two relative unknownsâ€”Muchacho Borracho and Lumberblackâ€”which heightens the delicious suspense. After much aggressive maneuvering, a late jab by Lumberblack on his full-suspension mountain bike sends Borracho to the pavement for the win. The humble rookies come out on top.

â€œThe nice thing about it is new people can come in to participate,â€? active combatant Carol Boland said of the unanticipated result. â€œItâ€™s definitely good to mix it up. Otherwise you get the same people month after month.â€?
Certainly, the free-for-all format of the sumo competition in recent months proves conducive to newcomers, if not the suspense of the affair. Then again, it wasnâ€™t always so.

â€œWe were out at a campground a few years ago and got bored,â€? 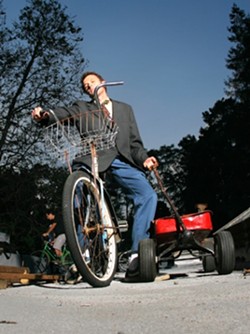 # pioneer Mark Grayson said of the night it was conceived.

After a few runs, word got out, and the spectacle grew into one of notable appeal. People showed up from all corners of life and every nook and cranny of Central California. The original format took its cues from professional wrestling: a tournament setup with a scribbled bracket displaying results across the field. Back then, a wrestler could ring out his opponent for a point and rivalries burgeoned through regular match-ups. The tension steadily escalated toward a final duel, which presented an event champion at the conclusion of the festivities.

â€œThere was this buildup of suspense toward the end, which was fun,â€? Murphy said.

â€œEverybody was pretty clean,â€? veteran Brad Buxton added. â€œOnly occasionally would we get drunk guys out there just crashing into people.â€?

As combatants started to develop monikers and back stories, Central Coast Brewing adopted the event. Names like Guinness, Muffdiver and Hot Carl soon earned the adoration of the crowd. The crowds grew almost too large for the brewery terrace.

Twelve times a year, people drank, bikes clashed, and all were merryâ€”until one night.

# is inherently a raucous event, and a nearby business suffered through angry patrons long enough. That staff filed a noise complaint, and the rest is a police reportâ€”albeit one that the police donâ€™t really remember. The minor altercation didnâ€™t really register on local law enforcementâ€™s long-term radar, though the crack down stuck in participantsâ€™ memories to this day.

It was strike three for brewery owner George Peterson, who said that he received a hefty fine for the incident. The happeners took up a collection to assume the cost of the fine. Police dispersed the crowd, but no arrests were made.

Knowing that the run-ins would continue for the duration of the tourist season and beyond, brewery management decided to pack up the sumo ring.

â€œEvery time, in the past six years, that that the cops have asked us to do something, weâ€™ve smiled and done it,â€? Grayson said. â€œThe Happening has always been about creating something positive in the community, and, if youâ€™re getting noise complaints, thatâ€™s not positive.â€?

Whatever comes after Exodus
â€œThe whole thing was really too bad,â€? Chambers lamented. â€œSumo didnâ€™t happen for a few months after that.â€?

The ring at the brewery was abandoned and, for a while, The Happening just trailed off after a few laps downtown. One night, say the old sumo guys, the disenfranchised competitors selected a remote site down a dead-end street to try and revive the pastime.

Unorganized and hastily assembled, the underground sumo events lacked the structure of the old system, along with the drama it supplied. And the beer. The beer was definitely gone. Moreâ€™s the pity. But bike sumo found a way to survive. The institution went nomadic, week after week setting up shop wherever the road ended. So it was for several months.

The messiah
Last fall, a smith named Wally Ajenel opened up his bike works just past the bend on Higuera Street. Realizing the lifelong dream of owning his own shop, the Guatemalan immigrant soon resolved to share the wealth.

â€œWith the lighting and all the open space, it was the perfect spot for it,â€? Ajenel said of his decision to take in the sumo.
The crowds remained modest for a while, much like at the advent of bike sumo, but as The Happening gained momentum, more attendees flocked to Ajenelâ€™s lot.
â€œWalter really came through,â€? Boland said. â€œItâ€™s a great space for sumo.â€?
Conservative estimates for the June Happening revealed about 700 participants. How many of those riders then attended sumo is a less-educated guess, but standing room in the sizable back lot proved a scarcity.

â€œThe neighborhood is fine with it. Weâ€™ve had no problems,â€? Ajenel said. â€œThe only thing now is thereâ€™s not enough space.â€?

With the pressing dilemma facing bike sumo relieved, the combatants are turning their attention to less-troublesome issues, mainly whether to keep the event freestyle or reinstate the tournament. After months of going with the hop-in-when-you-like method, the tourney board made a ceremonious return at The Happeningâ€™s sixth anniversary on June 1.

The veterans still came up short, due to a wicked run by an unknown BMX challenger and the infamous Sethzilla, back from a training stint in Japan. Murphy, the chief proponent of the tournament format, glanced about in quiet approval.

Others prefer the less intimidating setup but, ultimately, nobody raises any contention.

After everyone flipped on their lights and rolled home, the vacant lot displayed the scars of much revelry.

And it was good. âˆ†