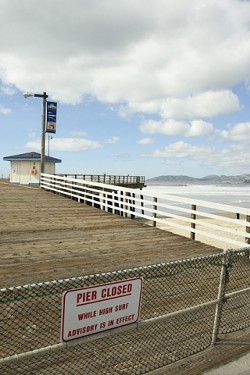 # Enormous waves in the Pacific on Feb. 24 prompted lifeguards to close down the Pismo Beach pier and forced a local surfing competition to be rescheduled. But they also created conditions good enough that a world champion surfer took notice and rode the beastie waves of a Central Coast outer reef break.

According to city officials and promoters of the Central Coast Invitational, the conditions were just too big and too dangerous for surfers and spectators.

"I saw 25-foot sets come through that were breaking a good 300 yards past the pier," said Rick Howard, Pismo Beach fire captain and lifeguard program leader. "It was one the biggest swells I've seen hit the Central Coast."

Howard said that the waves were hitting the bottom of the pier and were crashing up against the seawall--creating a health hazard for onlookers.

According to Public Works Director Dennis Delzeit, this is the second time this season the pier has been shut down due to large waves. Prior to the pier's closure in the middle of December, city officials went a couple of years without having to close it, he said.

Besides the pier's closure, the second annual invitational--a competition that hosts 50 of the best local surfers--was postponed until March 1.

"It was one of the bigger swells we've had, but the surf was just unbelievably, ridiculously bad," said Anthony Randazzo, event sponsor and co-owner of San Luis Surf Company. "It's such a rare occurrence to get all the best Central Coast surfers in one arena, we wanted to do it right."

In addition to the closures, sources said nine-time world surfing champion Kelly Slater braved the waves of Cayucos' Mouse Reef. There was no word if the former Baywatch actor ran in slow motion once he returned to shore.