'Super Troopers 2' doesn't live up to its predecessor 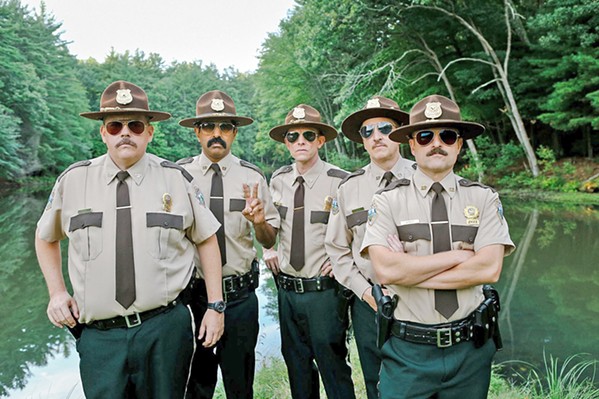 Glen The Godfather II this ain't. Instead, it predictably suffers from sequel disease: more of the same turned up to 11, but devoid of the surprise of the first film. When the film opens, the boys have lost their jobs with the local police department after having earlier lost their jobs as highway patrolmen. They're working at a construction site under foreman Farva, an insufferable tool who makes a lot of caulk (read: cock) jokes. They're told by the governor that they can earn their patrol jobs back if they can successfully transition a Canadian town into an American one. The Canadians aren't too receptive, and things heat up after the team begins discovering caches of drugs, cellphones, and guns, which after the land trade-off between Canada and the U.S. will already be on U.S. soil—a nifty smuggling trick. What follows is a lot of shenanigans between the troopers and their Mountie counterparts, as well as a search to discover the smugglers. Overall, it's pretty funny, though not quite as funny as the first and certainly not as original. Stay through the credits. The best bit happens at the very end.

Anna I was super excited along with a little wary when I heard this movie was being made and that the filmmakers crowd-sourced the funds to do it. I've seen the first film a dozen or so times at least, and I still laugh-cry every time. From antics on the road to pranks on each other, the jokes were original, hilarious, and incredibly quotable. Unfortunately, as you said, this installment suffers from sequel syndrome, and while the jokes are still good and the antics raucous, the fun of the surprise is spent. The storyline follows the funny instead of the other way around, and for the most part is pretty unimportant. I'm here for the laughs, guys! Bring 'em on! Luckily this sequel doesn't falter so much that it becomes bad, and I did chuckle at these mustachioed dudes and the callbacks to the first film. It's silly and the humor can be a bit groan-inducing, and die-hard fans of the first flick are probably going to find it a bit lacking. Perhaps it's better watched at home after downing some edibles and sitting back with a beer, which to be fair is the best way to watch the first one as well.

Glen Releasing it on 4/20 was no doubt not-so-veiled instructions on the best way to watch this film ... high as a kite. Maybe that's why I wasn't laughing out loud: too sober. This is lowbrow humor with a big dose of slapstick. For instance, after finding the cache of drugs but being unable to get either a Canadian or U.S. lab to run toxicology reports on what they'd found, the boys each decide to drop a pill and see which way it takes them, discovering various uppers and downers. Thorny continues to gobble one, a female hormone booster, throughout the film, becoming increasingly shrill and emotional—gross stereotypical female behavior—and ultimately lactating uncontrollably. If you think too deeply about any of this, it'll be easy to get offended, but isn't offensiveness the basis of a lot of comedy? Likewise, the French-Canadian stereotypes come fast and furious. There's also a strip club scene, lots of boobs, and some penis gags. Just to drive home the Canadian Mountie angle, there's even a cartoon cliché scene with one of the guys chained to the conveyor of a sawmill saw. If you love this sort of thing, go to the late show high on weed. If you like this sort of thing, try a matinee. Personally, I would have been happy renting this from Redbox in three months. 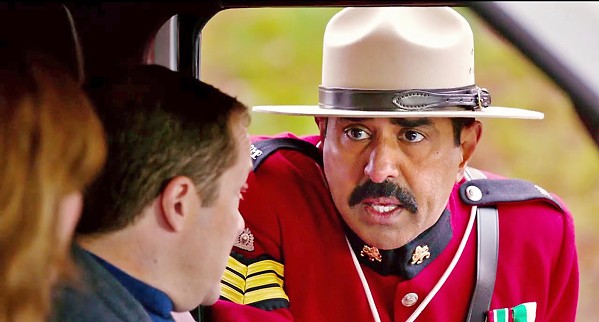 Anna The troopers aren't the underdogs in this go round, and it makes it harder to root for this group of clowns. They're in charge, and they don't seem to handle it too well. Instead, their antics come off pretty petty and power hungry, a mistake perhaps inherent to the plotline of the script. I'm betting a lot of the truly die-hard fans were in the theater on 4/20, seeing it how the filmmakers no doubt intended—stoned and hungry for more zany humor from the crazy cops. These guys are funny, no doubt. The Broken Lizard website describes them as a "five-man comedy, filmmaking group, devoted to intense sunshine, Floridian deep tissue massage, and the advanced study of keeping it realism." None of their other films that I've seen have quite hit the mark for me as much as the original Super Troopers, and while I'm not surprised, I'm a little disappointed that the sequel doesn't match it. It's the same dog doing all the same tricks, and this time around it felt a little old and tired. As I said, I will always laugh at these dudes and their ridiculousness, but I could have done it happily from my couch at home once it got released. Δ