The fledging battle for San Luis Obispo County District 1 supervisor is already off to a hot start.

A spree of local radio ads paid for by incumbent Supervisor John Peschong paints his new opponent, Stephanie Shakofsky, as a "San Francisco liberal" attempting "a left-wing takeover" of the Board of Supervisors, according to a Dec. 9 summary of the ad in The Tribune. 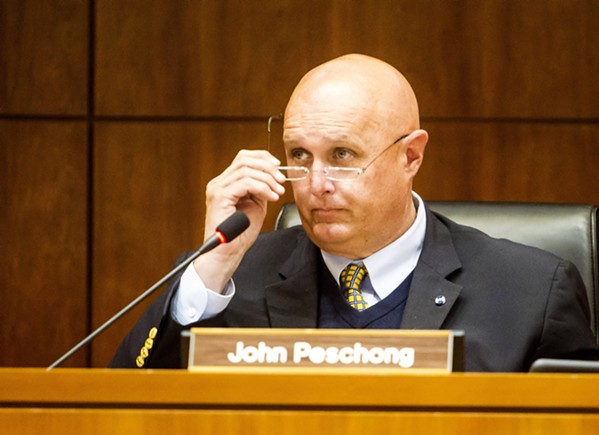 The ads caused a stir in North County, as Shakofsky had yet to formally announce her candidacy. Shakofsky is a Paso Robles vineyard owner who recently moved to SLO County from the Bay Area. A former director of the Oakland-based Center for Creative Land Recycling, Shakofsky is a leading critic of the incoming cannabis industry in SLO County.

Shakofsky said Peschong's ad was full of "a bunch of scare words."

"It's all political lies," she told New Times. "It's what he does for a living. He writes dirty ads as a political consultant. ... The only thing he got right was the pronunciation of my name and the fact I recently moved from the Bay Area."

Shakofsky said she is running for her first elected office on a platform of "open and transparent government." She alleges that "backroom deals" created favorable rules for the cannabis industry, at the expense of local residents.

"They wrote those regulations really behind closed doors with the industry groups and tried to foist it onto the public," she said. "They ended up kicking up a hornets nest."

The owner of Saint Marie Vineyard is behind two lawsuits challenging cannabis projects that were approved in North County.

Peschong denied any attempts to favor the cannabis industry as a supervisor.

"If you ask the [cannabis] farmers, they'll tell us it's very slow," Peschong told New Times. "We've held hundreds of cannabis meetings over the last three years, taken input from all kinds of different communities.

"I guess she didn't live in the county at the time and couldn't attend them," he added.

Shakofsky has been critical of Peschong's leadership on groundwater. Her stance is that agricultural stakeholders were sidelined in the sustainability plan development, which could result in economic impacts.

As for the contentious start to their race—which culminates in the March, 3, 2020 primary election—Shakofsky said it has actually helped her campaign.

"My donations have gone up. People are calling me telling me they're just disgusted," she said. "People in this district are just sick of the negative campaigning, and this is crossing all party lines." Δ