The Five Cities Fire Authority (FCFA) is looking to phase out the use of part-time reserve firefighters in the coming years, but the agency will have to sell its three participating communities on the expensive proposition. 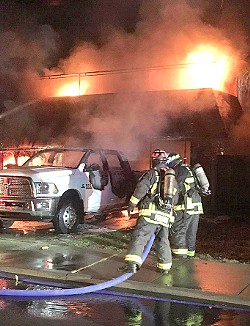 Five Cities Fire Chief Steve Lieberman presented a proposed plan to members of the Arroyo Grande City Council on Jan. 9, stating that recruitment and retention issues with the reserve program had created critical staffing shortages. To address the problem, the agency's board of directors wants to hire an additional six full-time firefighters in 2018 and phase out the reserve program over the next four years.

"The part-time program is no longer viable or sustainable," Lieberman said.

The FCFA provides fire services for Arroyo Grande, Grover Beach, and the Oceano Community Services District. Prior to its formation, fire service was historically provided by volunteer fire departments, which later morphed into a part-time reserve firefighter program after the agency's formation. Growing development, population, and increased calls for service have raised the need for more firefighters, but the area's high cost of living and the lure of full-time opportunities elsewhere have diminished the number of the department's reserve firefighters from 25 in 2011 to just six in 2017.

Because of the shortage, more of the agency's firefighters have been working overtime or shifts between 76 and 120 hours, raising concerns about cost and safety from some City Council members.

Under the proposed plan, Lieberman would be authorized to conduct an emergency hire of three full-time firefighters by April and hire an additional three more in July 2018. According to a proposed timeline, the reserve program would be maintained until 2020, when it would be eliminated.

But making those hires won't come cheap. The proposed plan would cost Arroyo Grande alone between $2.4 million and $2.9 million over the next four to five fiscal years.

That price is steep as the city prepares to begin discussions on its next budget, which officials said was already tight.

"It's not an easy discussion to have because the money is really the elephant in the room," Councilmember Caren Ray said. "I'm truly afraid of what this budget is going to look like. ... We have got to find a way. I don't know how we are going to do it."

Mayor Jim Hill called the situation "sobering" and indicated that the city and its residents may face some tough choices come budget time.

"This budget cycle is going to have wrenching changes to lifestyles here in Arroyo Grande and the three communities, Oceano and Grover Beach included," Hill said, later adding, "There's going to be hard decisions made. What is the community willing to give up, and if you're not going to give it up, what will you be willing to pay for?"

Concerns over an impact to fire services was all the more prescient the night of the meeting, as Hill noted that firefighters in Santa Barbara County were working to rescue victims of deadly mudslides following the massive Thomas Fire.

"Our community's geography is no different than our neighbors to the south," he said. Δ