The small community of Oceano is now home to two community advisory councils, an unusual situation that some claim is an attempt to overthrow the area's original and left-leaning council.

At a meeting on June 8, the San Luis Obispo County Board of Supervisors voted to recognize the Vitality Advisory Council of Oceano, a newly formed community advisory council made up of Oceano residents and business owners that first requested approval from the board in April. The 3-2 vote, with 2nd District Supervisor Bruce Gibson and 3rd District Supervisor Dawn Ortiz-Legg dissenting, came after nearly two hours of contentious public comment from community members, some who complained that the original advisory council had become deeply one-sided and unwilling to consider conservative ideas.

Jonathan Rodriguez, an Oceano resident and founding member of the Vitality Advisory Council, said at the June 8 meeting that as a longtime youth pastor, he's had the opportunity to build relationships with many Oceano families and community members, many who he said don't feel represented by the region's original council, the Oceano Advisory Council. 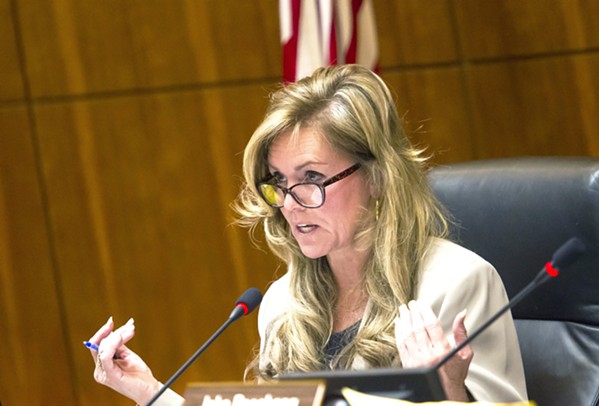 "Through the past few years I've heard this small group of people say they represent Oceano, that they are the voice of Oceano, I've heard them say they represent the Latino and underprivileged people of Oceano," Rodriguez said at the meeting. "Yet their message and their views do not reflect my own or the views of many of the multigenerational families that I have come to know throughout my lifetime."

The new group's other founding members include Linda Austin, president of the Oceano Community Services District; Adam Verdin, co-owner of Old Juan's Cantina; Marios Pougioukas, owner of the Rock and Roll Diner; Barney Foster, a recent failed candidate for the Oceano Community Services District; and resident Gina McMahon. They say members of the original Oceano Advisory Council have long failed to take the needs of Oceano's businesses into consideration, instead advocating for the closure of the Oceano Airport and the elimination of off-roading in the Oceano Dunes State Vehicular Recreation Area (SVRA).

But other community members who spoke at the June 8 meeting pointed out that the Oceano Advisory Council has several vacant seats, which those interested could fill. Several said that while opposing views on a single council would make room for healthy debate, the creation of a second council would only sow division in the community.

Arroyo Grande resident Kay Gore called the move 4th District Supervisor Lynn Compton's "latest petty self-serving ploy" and an attempt to defund the existing council and replace it with one that supports her political agenda.

"Lynn Compton," Gore said, "have you no shame?"

The Oceano Advisory Council has been meeting regularly since it was officially recognized by the Board of Supervisors in 1996. Community advisory councils don't have any real voting power, and while most usually receive small amounts of funding from the Board of Supervisors, the board isn't required to fund them or required to fund each council equally.

In April, the Oceano Advisory Council sent a line-by-line budget request to Supervisor Compton's office detailing funding needs through December 2022, according to chair Allene Villa. The request, which totaled $4,832, included items like office supplies, website maintenance, and a Zoom contract. The most expensive request was a one-year contract with Survey Monkey—at a cost of $2,700—for a proposed community needs assessment regarding the future of Pier Avenue.

Villa said she never heard back from Compton or her office. Now she worries Compton will choose to fund projects proposed by the new council over those proposed by the Oceano Advisory Council, effectively dismantling the initial group.

At the June 8 meeting, Compton said she had nothing to do with the formation of the Vitality Advisory Council.

"I value everybody's opinion, whether it's pro something or against something. The problem is a lot of opinions are being drowned out right now, and you're getting four to five people that have their opinion being represented as Oceano. And in all honesty, in my opinion, this would never being coming forward if other community members thought their voices were being heard."

Compton said that while some community advisory councils throughout SLO County choose members through various kinds of election processes, the Oceano Advisory Council does not. The new advisory council in Oceano doesn't plan to hold member elections at this point either.

A resolution passed by the SLO County Board of Supervisors in 1996 sets out the minimum requirements for an advisory council to be recognized, but it does not require that all councils have a standard election process to choose members, according to County Counsel Rita Neal. The board could standardize that process through the approval of a new or amended resolution.

While Compton said she'd like to address the inconsistency among the county's advisory councils, she shot down Supervisor Gibson's repeated attempts to hold off on the formation of the new advisory council.

"I don't think it's great to have two advisory councils in all honesty, and I wish—like in some of the comments people said—I wish everybody could be in one council and you could get different viewpoints. However, that's not, with the current council, how it works," Compton said. Δ