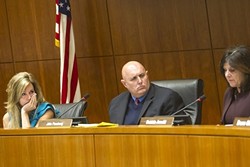 Gibson made the motion to have county staff draft a formal resolution after representatives from the local chapter of the Surfrider Foundation and the Environmental Center of SLO urged the board to take a stance—something other California counties have done. The Santa Barbara County Board of Supervisors passed a resolution in opposition to expanded offshore drilling on Jan. 30.

The board's inaction means that the public comment period for the Trump administration's 2019-2024 oil and gas leasing program—which includes six new oil and gas leases off California's coast—is set to expire on March 9 without a statement from SLO County.

"It's a very sad situation that this board refuses to stand up and speak out against what is a palpable threat to the interests of this county," Gibson said.

On the dais, Compton expressed discomfort with the language of a proposed resolution that the Surfrider Foundation had submitted. Arnold said that Measure A, which was passed by county voters in 1986 and requires voter approval of any onshore oil facilities, would allow the question of offshore development to be decided by local citizens.

Compton stated via email that she is opposed to offshore oil and gas drilling. She cited her vote last February in favor of a letter sent to U.S. Interior Secretary Ryan Zinke affirming the county's support for Measure A and her vote denying the Phillips 66 rail spur extension project as evidence of that position.

"I think I'm adequately on record with my position," Compton said.

Arnold told New Times her deferment to Measure A had to do with wanting to omit the board's political leanings from the offshore oil drilling issue.

"[The] ideology of an elected board kind of ebbs and flows, and Measure A levels that out in that if there's ever a proposal for offshore oil leasing in this county, it's got to go through the people to be viable," Arnold said.

Since being elected to the board in 2016, Peschong has recused himself from any vote relating to the oil or gas industries.

According to Fair Political Practices Commission filings, Peschong received at least $10,000 in compensation for his work as a political strategist from Phillips 66 Company; Exxon Mobil Corporation; Pinnacle West Capital (an energy firm in Arizona); and Monterey County for Energy Independence, the political action committee that in 2016 campaigned against Measure Z, which banned fracking in the Monterey County. Δ