A standing-room-only crowd gathered Aug. 22 to hear a lengthy presentation about the county jail's mental health needs in the wake of a mentally ill inmate's death in January.

The San Luis Obispo County Board of Supervisors heard from Sheriff Ian Parkinson and Health Agency Director Jeff Hamm, who laid out recent changes in protocol and policies made after the death of 36-year-old Andrew Holland, a schizophrenic man who died in custody after being strapped in a specialized restraint chair for more than 46 hours. 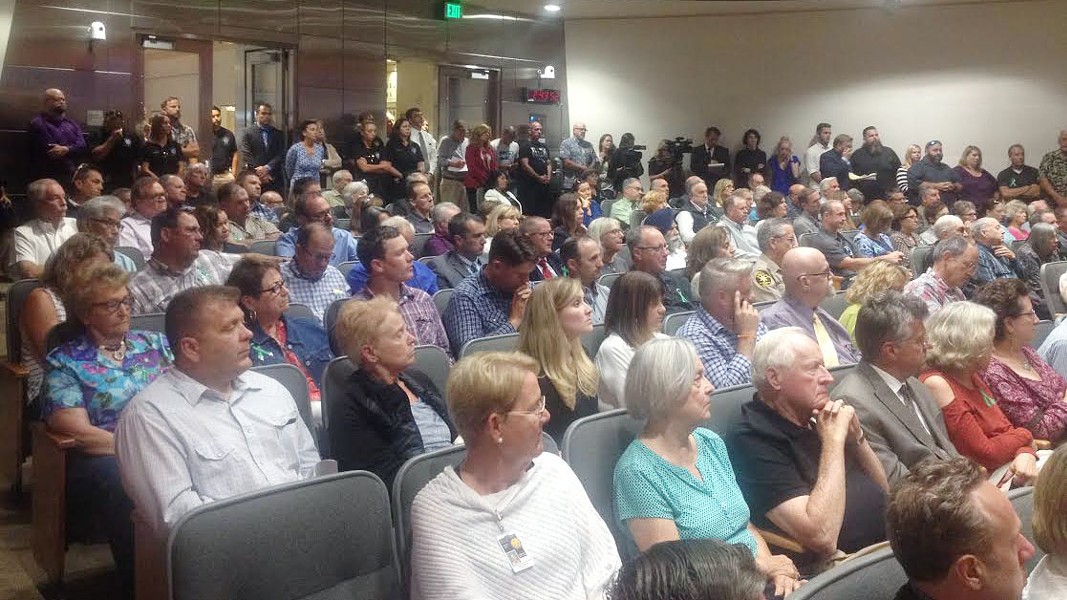 While Parkinson, Hamm, and the board made commitments to address the systemic challenges of holding, treating, and ensuring the safety of mentally ill inmates, several members of Holland's family demanded that those involved be held accountable, insisting that people, not policy, killed Holland.

"Jail staff and Sheriff Ian Parkinson are responsible, in my opinion," Bonnie Holland told members of the board at the meeting.

Speaking publicly for the first time since Holland's parents called for his resignation on July 27, Parkinson laid out the difficulties of housing the mentally ill in the jail, noting that no single official at the facility has true oversight responsibility for all aspects of inmate health and well-being. Parkinson said he's long been concerned about the growing number of mentally ill inmates.

"This has been a difficult issue to solve," he said. "I've sat back and had to watch this issue progress in our community with some sense of helplessness."

Parkinson acknowledged that the county "absolutely" bore responsibility for Holland's death and said he was committed to preventing future deaths. Hamm, whose department oversees medical and mental health issues both in and out of the jail, also acknowledged his department's role in Holland's death. Holland had been waiting 12 days for a transfer to the county inpatient mental health facility before he died.

"I think we allowed ourselves to become a little complacent," Hamm said.

Both Hamm and Parkinson reviewed list of changes that they believe will help prevent future deaths. Those included restricting the amount of time inmates are held in safety cells, new protocols to make beds available and facilitate faster transfers from the jail to the county's 16-bed psychiatric facility, and formalizing regular communication between correctional staff and the county's heath agency.

While many of members of Holland's family approved of those changes, they asked supervisors to push back on what some of them characterized as a "junk narrative"—that Holland's death was the inevitable result of systemic problems.

"This was not bad policy. This was not a systemic problem," said Holland's cousin, Tave Holland. "You have a problem with staff. You have a human problem."

Family members called on the county to release a video of the events leading up to Holland's death to the public, which they believe shows evidence that contradicts the county's narrative.

Other members of the audience, which included correction and probation staff, voiced their support for Parkinson. Several expressed confidence in his commitment to fixing the problems brought to light by Holland's death.

"We have been impressed with his concern for county inmates," Mary Scarborough said. "I have never seen someone as proactive as he is."

The meeting concluded with the Board of Supervisors unanimously voting to direct staff to explore the possibility of contracting a private company to provide mental, medical, and dental care to jail inmates. They also asked staff to explore participating in The Stepping Up Initiative, a national initiative that provides counties with tools and strategies for addressing the issue of mental illness in jails.

"The tragedy of today is that Andrew Holland had to die so we'd actually have this discussion," said 1st District Supervisor John Peschong. "And I know for a fact that we have people that are committed in this community to making sure this doesn't happen again." Δ