Supervisors throw a wrench in the proposed Paso water district by insisting on one landowner, one vote 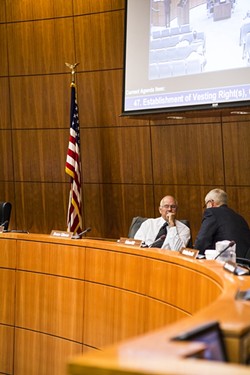 In what may become a landmark decision, the San Luis Obispo County Board of Supervisors made a move that could significantly changed the proposed Paso Robles Groundwater Basin Water District’s formation process.

At their June 17 meeting, county supervisors reviewed state Senate amendments to AB 2453, a bill that would provide a legislative platform for establishing the proposed district. The bill passed the Assembly in May, and June 18 passed the Sentate Governance and Finance Committee with the new amendments.

On June 10, SLO County Supervisor Debbie Arnold called out Bruce Gibson, the board’s chair, for signing off on the amendments in a letter of support to Assemblymember Katcho Achadjian, the bill’s sponsor. Achadjian sponsored the bill after the supervisors voted 3-2 to support it in February. While the board’s chair routinely signs off on such amendments to state legislation, according to County Administrator Dan Buckshi, handling this particular issue has been anything but routine. Arnold and a growing number of landowners have questioned the fairness of the proposed district, particularly the way its formation might favor large landowners.

“I think you’re getting the gist right now that the collective voices are in opposition to AB 2453,” Creston resident Joseph Sulse said when county supervisors readdressed the issue on June 17. “We should allow for one person, one vote.”

As originally proposed, whether or not the district would form via a voting scheme based on property held. Property owners with more land would receive larger proportional votes. Then, the district’s nine-member board would include representatives elected by small, medium, and large landowners and three at-large seats, elected by category.

The water district is one solution stakeholders have placed on the table as a means to address an ailing water supply, where the sprawling groundwater basin has declined as projected demand continues to surpass sustainable yield.

The district’s supporters contend that a district is the only way residents and affected property owners can maintain local control of the basin. But a growing contingent of critics asserts that the district would allow control of the water supply to fall into the hands of the rich and powerful, including corporate-owned wineries. Critics have also raised concerns that some entities have plans to sell water to buyers outside of the county.

Under the now defunct proposal, approximately 30 landowners would be able to vote in a district that would affect more than 4,000 landowners.

“My problem is that thousands of people would be dragged into a district that they don’t want to be in,” Arnold said.

Marking a significant change in direction, Supervisor Frank Mecham joined Arnold and Caren Ray—who have had concerns about the formation—in a 3-2 vote to support the bill’s proposed amendments only if the bill is also amended to require a one-landowner, one-vote formation.

Mecham said that while the supervisors may disagree on particulars, there’s still a general consensus in favor of some sort of district. Whether his vote will effectively end the matter, however, is unclear. During the initial roll call vote to insist on the new amendment on June 17—before the supervisors hashed out any of the subsequent details—Mecham paused before saying “yes,” after which Gibson swiveled his chair to the right, faced Mecham, and said with a puzzled look, “So, that just killed AB 2453.”

Though that isn’t the case so far. After passing one committee June 18, the bill will go before the Natural Resources and Water Committee on June 24.

Achadjian—who’s previously said he’d only support the bill with direction from supervisors—said in a statement to New Times, “The management of water is a local issue that should be managed by local agencies. After recieving their letter last night, I am working to amend my legislation to incorporate the changes sought by the Board of Supervisors.”